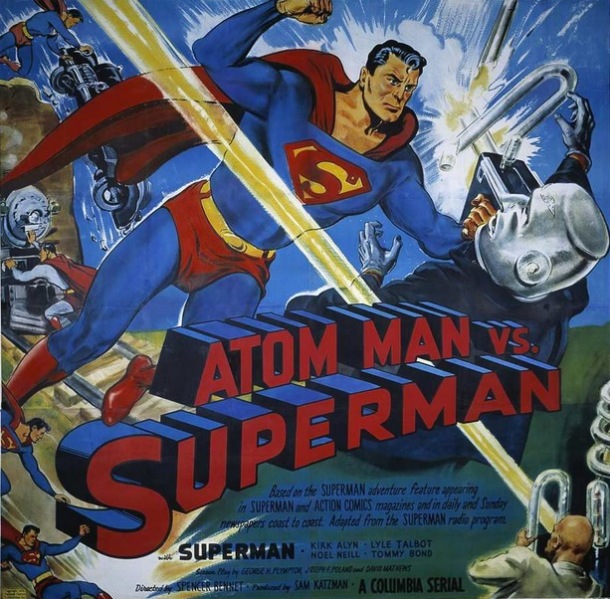 Atom Man vs. Superman was the second of two Columbia serials that starred Kirk Alyn. The film serials were soon overshadowed by the very popular Adventures of Superman series starring George Reeves that ran on TV from 1952 to 1958.

It’s safe to say that if you’re digging into the Kirk Alyn serials, you’re a serious enough Superman completist to want to watch both of them.

However, if you’re only a mildly die-hard Superman fan and just want to watch one of the Kirk Alyn serials, I’d recommend this one. I know some comic-book fans love origin stories, but personally I find origin stories tiresome, and once they’re out of the way the real fun can begin. (See, for example, Sam Raimi’s Spider-Man 2, The Dark Knight, and Captain America: The Winter Soldier.)

Atom Man vs. Superman treads a lot of the same ground as Superman (1948) — it’s still a low-budget affair helmed by producer Sam Katzman and director Spencer Gordon Bennet — but unlike the first serial, this one features Superman’s greatest nemesis, Lex Luthor. Also, Kirk Alyn physically looks better in the role of Superman than he did in the first serial. His physique is still nowhere close to what you’ll see in comic-book movies today, but he does look like he hit the gym and packed on some muscle after his first appearance as the character.

Character actor Lyle Talbot was the first actor to portray Lex Luthor onscreen, and despite wearing a bald cap instead of having a shaved head, he looks like the character we know from the comics and delivers a pretty good performance. And, just like the first serial, Noel Neill is fantastic as Lois Lane. With all due respect to Margot Kidder, Neill’s interpretation of the character is my favorite of all time. In fact, Neill was the only actor from the Columbia serials who went on to play the same character in the 1950s TV series. 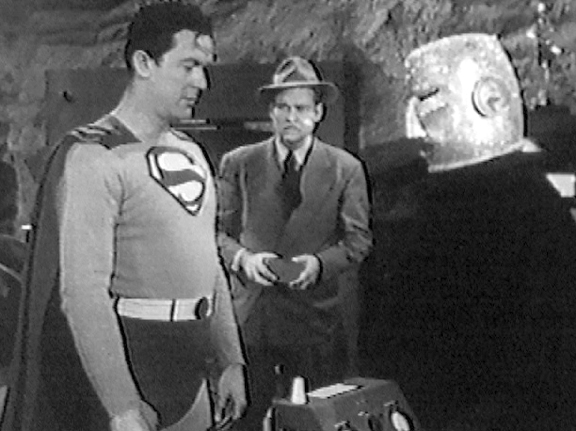 Atom Man vs. Superman is not without its problems. The titular “Atom Man,” who wears a black robe and a glittering bucket over his head, never quite works as a villain. And this is still a Sam Katzman production, which means it’s a low-budget affair that plods along without ever hitting the delirious heights of the best serials, like Adventures of Captain Marvel (1941).

Still, it’s got plenty of goofy fun, not to mention that every chapter opens with the cheeriest montage of atomic bomb explosions you will ever see.