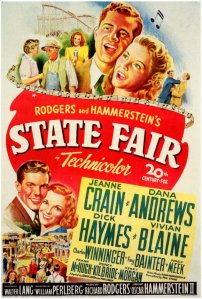 State Fair was the first musical made specifically for film by Rodgers and Hammerstein. Their two previous musical collaborations, Oklahoma! and Carousel, were both stage productions. (Although both would eventually be made into films in the ’50s.) State Fair was based on a novel by Philip Stong that had previously been made into a non-musical film in 1933 with Will Rogers.

Margy Frake (Jeanne Crain) and her brother, Wayne (Dick Haymes), go to the Iowa State Fair with their parents (played by Fay Bainter and Charles Winninger) and their prize hog, Blue Boy. Margy and Wayne are both somewhat dissatisfied with their current significant others, and each find someone a whole lot more exciting at the fair; she a cavalier reporter played by Dana Andrews and he a flame-haired singer played by Vivian Blaine. Things go well for both, but can their love affairs outlast the fair?

Musically primitive and relentlessly cheery, State Fair injects life into its clichéd proceedings with charm, humor, and some cartoonishly outsized, Technicolor images of middle-American excess. And Andrews (who played the detective in the 1944 noir classic Laura) is rakishly charming, almost but not quite a thug, and always fun to watch.