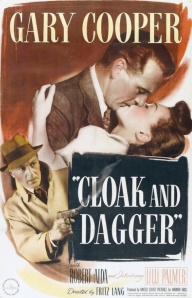 Fritz Lang’s Cloak and Dagger is the best espionage thriller I’ve seen since Alfred Hitchcock’s Foreign Correspondent (1940). Like that film, it doesn’t have the over-the-top stunts or pyrotechnics of a modern action movie, but its pacing, plot, and music create a spectacle that is every bit as suspenseful and exciting.

Gary Cooper, who is best known for playing stoic men of action, gives a credible performance as bookish physicist Alvah Jesper, a man who finds himself in over his head, but is smart enough and tough enough to find a way out of one tight situation after another.

Professor Jesper is recruited by the O.S.S. (the Office of Strategic Services, the U.S. intelligence agency formed during World War II that would eventually become the C.I.A.) and sent to Switzerland to bring his former colleague Dr. Katerin Lodor (Helen Thimig) back to the United States. Dr. Lodor, an elderly woman, escaped through the Alps from Germany, where she was being forced to work on an atomic bomb project for the Nazis. Switzerland is a neutral country, but it’s lousy with agents of the Gestapo, and Dr. Lodor’s life is in peril.

Immediately, there are two implausible aspects of the plot that you have to get over to suspend your disbelief and enjoy the picture. One is that the O.S.S. would recruit a college professor with no experience in the intelligence field to act as an undercover agent merely because he has a personal connection to their target and speaks conversational German. The other is that, by this point in 1946, it was common knowledge that any nuclear research being conducted by the Nazis was mostly smoke and mirrors, and the Third Reich was never close to developing an atomic bomb.

Neither of these issues proved a stumbling block for me. Every spy thriller needs a plot hook, and plenty of these hooks prove either factually inaccurate or completely ridiculous after five or ten years have passed. Also, the O.S.S. was a young organization, and they did some pretty wild stuff during the war. Recruiting a college professor in his mid-40s for dangerous undercover work doesn’t seem completely outside the realm of possibility. (Cooper’s role is loosely inspired by the exploits of Michael Burke, president of the N.Y. Yankees from 1966 to 1973, who briefly played with the Philadelphia Eagles in 1941 before leaving to serve with the O.S.S., where he worked behind the lines in Italy and later in France, where he helped the Resistance prepare for D-Day.)

There are some great touches, too. When Jesper disembarks in Switzerland, he thinks he’s being smart by casually covering his face with his hand when he walks by a photographer, but it is precisely this action that alerts the Gestapo to the fact that he might be a man worth watching.

After Jesper makes contact with Dr. Lodor, she leads him to Dr. Giovanni Polda (Vladimir Sokoloff), another physicist who is being forced by the Nazis to work on their atomic bomb program. Jesper travels to Italy, where he is aided by Italian partisans led by Pinkie (Robert Alda) and the beautiful Gina (Lilli Palmer).

Luckily, Jesper is able to pose as a German doctor because the Italian fascist thugs keeping Dr. Polda prisoner in a beautiful villa clearly don’t recognize American-accented German when they hear it. Viewers with an ear for languages probably will.

The Italian baddies are led by a man named Luigi, who is played by veteran character actor Marc Lawrence, who had a very long career playing gangsters in Hollywood. His first film role was an uncredited part as a henchman in If I Had a Million (1932), and one of his last was playing Carlo Gambino in the 1996 TV movie Gotti.

Toward the end of the movie, Cooper and Lawrence square off in the most brutal and realistic fight I’ve seen in a movie from the 1940s. The James Cagney thriller Blood on the Sun (1945) features a great judo fight that was way ahead of its time, but the combat between Jesper and Luigi is a desperate fight to the death, pure and simple. There’s nothing flashy about it, and it’s not overly choreographed. The two men hold each other close, clawing at each other’s faces, choking each other, kicking at weak points, and twisting back fingers and arms. It’s over in less than 90 seconds, but its impact lasts for the rest of the movie.

The screenplay for Cloak and Dagger was written by Albert Maltz and Ring Lardner, Jr., based on a story by Boris Ingster and John Larkin, and “suggested” by the 1946 nonfiction book Cloak and Dagger: The Secret Story of O.S.S., by Corey Ford and Alastair MacBain.

Director Lang is best known for the films he made when he still lived in Germany, such as the silent science fiction opus Metropolis (1927), the chilling portrait of a child killer M (1931), and the crime thriller The Testament of Dr. Mabuse (1933), but Lang was a master craftsman at every stage of his career, even when doing for-hire work like this.