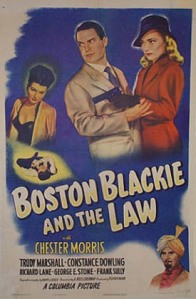 D. Ross Lederman’s Boston Blackie and the Law, produced by Ted Richmond, is the twelfth of 14 Boston Blackie features released by Columbia Pictures from 1941 to 1949.

Horatio “Boston Blackie” Black was a gentleman thief and safecracker created by author Jack Boyle in 1914. Stories featuring Boston Blackie appeared in The American Magazine, Cosmopolitan, and Redbook, and the character showed up in a number of silent films starring a variety of different actors. When Chester Morris stepped into the role in Meet Boston Blackie (1941), however, he was on the road to becoming inseparable from the character. Meet Boston Blackie was the first “talkie” featuring Boston Blackie, and Morris would go on to play Blackie in all 14 programmers released by Columbia Pictures. Morris also played the character on the radio, in a 1944 summer replacement series for Amos & Andy. When Blackie returned to the airwaves in 1945, Richard Kollmar took over the part, and starred in more than 200 episodes.

The radio version of Boston Blackie is the one I’m most familiar with, and while I’m a regular listener, it’s never been one of my favorite shows. Occasionally there’s a really crackerjack episode, but mostly they’re middle-of-the-road mysteries with more corn than the state of Iowa. Judging solely by Boston Blackie and the Law, which is the first Boston Blackie movie I’ve ever seen, the film series is pretty similar. Blackie is a likable rogue, but his puns are pretty lame, and he’s got plenty to go around.

Boston Blackie and the Law begins in a festive fashion, with Blackie performing a magic show at the annual Thanksgiving party at Women’s State Penitentiary. An old lady in the audience says, “I didn’t know Boston Blackie was a magician.” A young blonde responds knowingly, “There isn’t a trick he doesn’t know.”

That young blonde is Dinah Moran, a.k.a. prisoner #31329 (played by Constance Dowling), and when Blackie offers to make someone disappear in his “Phantom Cabinet,” she volunteers. Blackie promises Warden Lund (Selmer Jackson) the disappearance will be only temporary, which gets a laugh from the audience, but no one’s laughing when he pulls back the curtain of the cabinet a second time and Moran is still nowhere to be seen.

Enter the long-suffering Inspector Farraday (Richard Lane) and his bumbling sidekick, Sgt. Matthews (Frank Sully). Farraday is Blackie’s foil; an eternal chump who always suspects Blackie of wrongdoing, and who always trips over his own feet while Blackie effortlessly solves the crime his own way.

After Blackie gives the imbecilic Sgt. Matthews the slip, he and his sidekick, “The Runt” (George E. Stone), follow clues to a stage magician named “Jani” (Warren Ashe) and his pretty, dark-haired assistant Irene (Trudy Marshall).

Jani, whose real name is John Lampau, bears a strong resemblance to Boston Blackie, which comes in handy when Blackie needs to impersonate him. (To enjoy a movie like this, you have to buy that Inspector Farraday and Sgt. Matthews can’t recognize Blackie up close just because he’s wearing a turban and a false Van Dyke beard.)

As usual with these types of B mysteries, I was left with more stupid questions than the film had trite answers when the words “The End” appeared onscreen. But I enjoyed it. Columbia’s mystery series of the ’40s — like The Whistler series and The Crime Doctor series — were top-notch B-movie entertainment, and Boston Blackie and the Law isn’t bad, either.