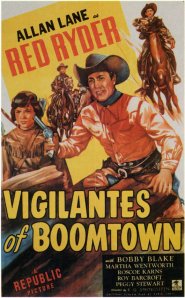 I thought Allan Lane’s third go-round as Red Ryder was his best yet, but it could just be because I’m a boxing fan.

Either way, Vigilantes of Boomtown was a fun way to spend an hour. It begins with a tour of boomtowns, culminating with Carson City, the capital of Nevada. The year is 1897, and a bill legalizing boxing in the state has enraged Molly McVey (Peggy Stewart), the daughter of a U.S. senator. Molly believes that Nevada crawled its way to respectability, and hosting a bloodsport will make the state look like a hotbed of savagery to the rest of the country. She’s so opposed to prizefighting that she plans to hire gunmen to stop the fight if the state legislature goes ahead with its plans.

Red Ryder (Lane) and his English-challenged young sidekick, Little Beaver (Bobby Blake), are drawn into the fracas because Ryder’s aunt, the Duchess (Martha Wentworth), is leasing her ranch out to the fight’s promoters, who plan to hold their bout on St. Patrick’s Day. The combatants are a Cornish blacksmith named Fitzsimmons (John Dehner) and a bank clerk named Corbett (George Tumer).

Corbett (the more likable and handsome of the two fighters) stays with Ryder and the Duchess at their ranch, teaching Ryder a thing or two about the sweet science. When Molly hires a couple of thugs (George Chesebro and George Lloyd) to kidnap Corbett, there’s a bit of mistaken identity, which leads to them carrying off Ryder instead of Corbett, and they stash him in that cave where all bad guys go in Republic westerns. Will Corbett’s boxing lessons stand Ryder in good stead? You’ll just have to watch and find out.

Oh, and at the very end, Corbett’s referred to as “Gentleman Jim,” just in case you hadn’t already put the pieces together.