I’ve seen Janis Carter as the female lead in two of Columbia’s “Whistler” pictures, The Mark of the Whistler (1944) and The Power of the Whistler (1945), but I couldn’t have picked her out of a lineup of other glamorous B-movie blondes from the ’40s until I saw her as the death-obsessed femme fatale with a heart of ice in Henry Levin’s Night Editor (1946).

The part she plays in Richard Wallace’s Framed is more nuanced and less irredeemably evil than the role she played in Night Editor, but she’s still a nasty piece of work.

Framed starts out with a bang. We see Mike Lambert (Glenn Ford), his hat pushed back on his head, looking scared and exhausted, behind the wheel of a runaway truck. The first minute of the picture looks like an outtake from Thieves’ Highway (1949) or The Wages of Fear (1953). Mike careens around mountain passes, fighting the gears of the truck every inch of the way, and pumping the brakes to no avail.

It’s a great way to start the picture, and it’s fast-paced and suspenseful enough for the viewer never to stop and wonder why Mike doesn’t try to run the truck off the road just outside of town instead of driving straight down Main Street and smashing his front fender into a parked pickup truck.

Mike Lambert isn’t a guy who thinks things through before doing them. He’s a classic noir character — smart and resourceful, but bullheaded and cursed with a single fatal flaw. In Mike’s case, it’s his habit of getting blackout drunk at all the wrong times, a condition he accepts the way other men accept the weather. “I told you I never remember what I do after I’ve had a couple of drinks,” he says, as though it’s just another one of those things, like not being able to remember people’s names or biting your fingernails.

Mike is an out-of-work mining engineer. He took the job driving the truck with no brakes to make a few bucks, but the truck owner’s refusal to pay him and his citation for reckless driving leave him stranded in the little California town with no choice but to do some time in jail, since he’s flat broke and can’t pay the fine.

A beautiful guardian angel appears in the form of pretty blond waitress Paula Craig (Carter). She pays Mike’s fine for him and even lends him money to get a room in town. It’s not hard to see that she must have ulterior motives, but Carter plays her role well, and has good chemistry with Ford, so it’s easy to sit back and let yourself be lulled for a little while into feeling as though you’re watching a laid-back, romantic drama in which everyone will live happily ever after.

And for awhile, things seem to be going Mike’s way. He befriends the kindly, bedraggled old man (played by Edgar Buchanan) whose truck he hit, and who just happens to have a mining claim he needs help with. Mike also does a good job of keeping Paula at arm’s length with matter-of-fact statements like, “Don’t count on anything I said last night. Liquor blanks me out.”

Soon enough, Paula’s evil schemes become apparent to the viewer, if not to the booze-addled Mike. She’s only working in a greasy spoon to troll for a patsy that she and her boyfriend, Steve Price (Barry Sullivan), need for a scheme they’ve got cooked up. And Mike fits the bill. 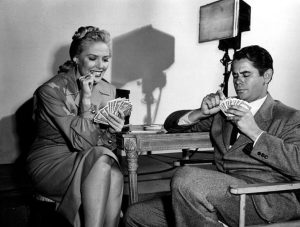 Framed is a programmer that benefits greatly from having a rising star like Ford in the lead role. It’s a B movie that’s clearly cast in the same mold as Double Indemnity (1944) and The Postman Always Rings Twice (1946), but I think it succeeds wonderfully on its own terms. The script by Ben Maddow (based on a story by John Patrick) evolves naturally as it chugs forward, and never seems too contrived. Shifting loyalties and the yearnings of the main characters drive the story forward, and it never felt as if plot points were being checked off.

Richard Wallace, the director of Framed, was a hard-working studio hack. His career as a director spanned from 1925 to 1949 (he died in 1951), during which he made 46 features and 15 shorts. Of the films he directed that I’ve seen, Framed is one of the best. It’s a brisk tale of love, lust, and betrayal that might not quite qualify as a classic, but it’s never boring.