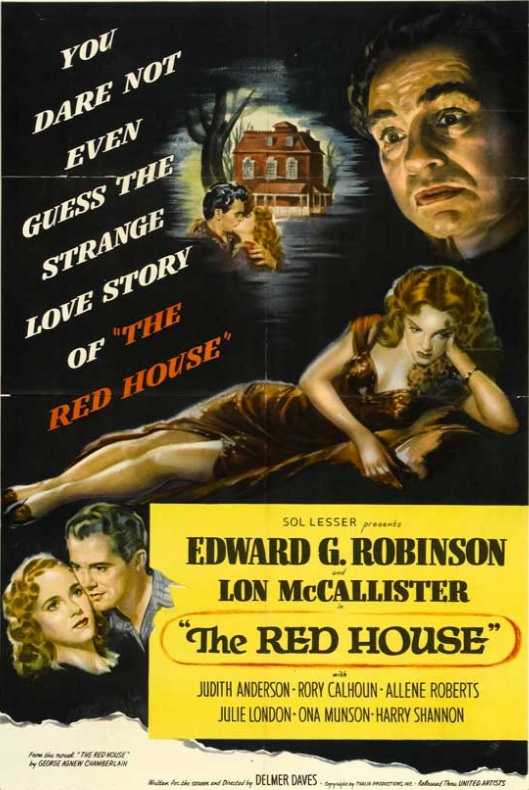 Is there really a red house in Delmer Daves’s The Red House? The movie is filmed in black and white, so I can’t tell you.

I’m not being cheeky, I’m making a point. The “red house” in The Red House is a haunting presence, unseen for most of the film. And when it is finally shown, it’s an eerie sight. It’s a structure in disrepair, covered in lichen, standing close to another abandoned house, both on the banks of a stream deep in the woods.

If The Red House had been filmed in color, this uncanny effect would have been destroyed. As it is, the red house — while shown — still stands more strongly as a disturbing manifestation of all the creepy goings-on in the film than as an actual thing.

The setting of the film is indeterminate. It’s a region called Piny Ridge, where, the narrator informs us, “modern highways have penetrated the darkness.” The darkness remains in an area farther south called Oxhead Woods, where “obsolete trails wander vaguely,” but “only one leads to the Morgan Farm.”

The narrator goes on to tell us that “Pete Morgan’s farm has the allure of a walled castle that everybody knows about, but that few have entered.” This all sounds a bit like a fairy tale, which I think is deliberate.

Pete Morgan (Edward G. Robinson) is a mercurial farmer who lives a lonely life with his sister, Ellen Morgan (Judith Anderson), and their adopted daughter, a pretty, demure 17-year-old named Meg (Allene Roberts). Fifteen years earlier, Meg’s parents both died in mysterious circumstances, and Pete and Ellen have raised her ever since.

Pete has a wooden leg, which makes farm work difficult, so he agrees to hire one of Meg’s high school classmates, Nath Storm (Lon McCallister), to help him out. Pete offers to pay Nath 35 cents an hour for his help after school, but Nath talks him up to four bits.

Pete seems reluctant to hire Nath, and is only convinced to do so by his sister and adopted daughter. It’s clear from the outset why this is. He has an unnatural interest in Meg, and wants to keep her all to himself.

After his first day helping out Pete, Nath plans to take a shortcut home through Oxhead Woods, but Pete tries to convince him to take the long way around. When Nath refuses to heed his warnings, Pete resorts to scare tactics. “You won’t save yourself from the screams in the night that’ll lodge in your bones all your life!” Pete tells him.

Nath asks, “Screams from what?”

Pete responds, “From the red house!!!”

Nath tries, but he can’t do it. The power of suggestion in the dark, terrifying woods amidst the howling winds proves too much for him, and he runs back to the Morgan farm and sleeps in the barn. Were they real screams? Or was it just the wind?

Meg and Nath are attracted to each other, but he has a girlfriend named Tibby, who’s played by the 20-year-old singer and actress Julie London. London is quite possibly the sultriest high school student I’ve ever seen in a film from the ’40s.

Tibby’s not very loyal to Nath, and throws herself at the strapping young woodsman named Teller (Rory Calhoun) who patrols Pete Morgan’s woods with a rifle. Teller never got past the ninth grade, but he’s as big and as handsome as Li’l Abner.

Teller is also the instrument of Pete Morgan’s twisted will, and goes even so far as attempting to commit murder when Pete Morgan asks him to.

The Red House, which is based on the 1943 novel by George Agnew Chamberlain, is sometimes classified as a film noir, but it’s not a noir. It’s a mystery wrapped up inside of a dreamy, avant-garde horror film. It’s halfway between Jean Renoir’s ode to rural American life The Southerner (1945) and Frank Wisbar’s backwoods ghost story Strangler of the Swamp (1946).

Daves’s naturalistic take on the uncanny tale, coupled with a lush score by Miklós Rózsa that alternates between being wildly dramatic and quietly eerie, elevates the pedestrian script and easy-to-figure-out mystery. The Red House could have easily been a forgettable B movie, but it’s a memorable little chiller with heavy doses of perverse sexuality running beneath the surface. With a few changes in costuming and dialogue, it could just as easily have taken place 300 years earlier, which is part of its power and its appeal.