The opening narration of The Unfaithful informs us that while the film takes place in Southern California, it deals not with a problem of a particular place, but with a problem of our times. At first, this problem seems to be rampant divorce, but it ends up being more about wartime infidelity (or possibly the widespread problem of married women committing murder in self-defense and then having to lie about it to cover up an affair).

It’s hard not to compare The Unfaithful with Nora Prentiss, which was released earlier the same year. Both were directed by Vincent Sherman, both star the beautiful Ann Sheridan, and both have infidelity as their subject. But while Nora Prentiss indulged in some truly outré and baroque excesses by the time the credits rolled, The Unfaithful goes in the opposite direction, and slowly peters out to an anticlimax. It’s a good film — well-acted and directed with assurance — but when it was over, I couldn’t help feeling as if the filmmakers wanted to make a melodrama about an “issue of the day,” but weren’t sure how to fold it into the murder investigation and blackmail story that dominate the film.

The picture opens with a party being thrown by a character named Paula (played by Eve Arden) to celebrate her divorce. (Interestingly, Arden herself divorced her husband — Ned Bergen — in 1947 after eight years of marriage. Her next marriage would be more successful. She married actor Brooks West in 1952, and they stayed married until his death in 1984 from a heart ailment. She and West had four children together.)

In attendance at the party is Paula’s friend Christine “Chris” Hunter (played by Ann Sheridan, who was also no stranger to divorce. She and her second husband, George Brent, divorced in 1943 on their one-year anniversary.) After the party, a mysterious figure attacks Chris as she unlocks the front door of her home. He pushes her inside and a struggle ensues, which we see play out through the living room windows of the Hunters’ suburban home as two silhouettes locked in a life-or-death struggle. 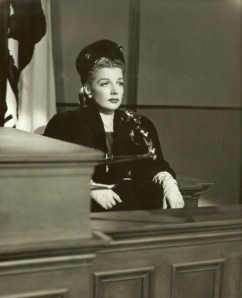 Det. Lt. Reynolds (John Hoyt) questions Chris, and doesn’t seem to really believe her story of a stranger attacking her in her home and demanding jewels, but he doesn’t accuse her of anything … yet. The detective also questions Hannaford about the couple, and Hannaford tells him he’d be hard pressed to find a couple as happy as the Hunters.

To summarize the plot any further would be to give away too much. It should suffice to say that there’s more to the story than Chris originally reveals to the police, and the film ends with a sensational trial and plenty of wagging tongues.

The Unfaithful takes place mostly indoors, but there are a lot of great Los Angeles exteriors, too. If you’re a fan of vintage street cars, this movie is worth checking out just for them.

Ernest Haller’s cinematography is especially memorable. I really liked the dark, low-angle shot of Zachary Scott parking his car in his driveway and striding along the front walk of his home after receiving some terrible news. And during the trial, there’s a wonderful shot of a bloody knife being held over the murder photograph, then quickly moved to the left as an exhibit — but for just a moment it seems as if we are seeing a gruesome murder scene with a bloody knife poised over a corpse.

The screenplay of The Unfaithful, by James Gunn and crime novelist David Goodis, is excellently written, with realistic dialogue and characterizations, especially in Ann Sheridan’s scenes with Zachary Scott. As I said, it’s a bit anticlimactic, but the journey is worth it, and The Unfaithful is worth seeing despite a weak final reel. Incidentally, it’s an uncredited remake of William Wyler’s The Letter (1940), which was based on the 1927 play of the same name by W. Somerset Maugham.