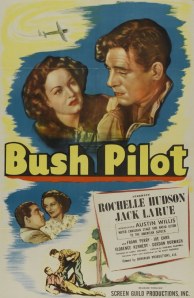 There are two kinds of bad movies, watchable and unwatchable. Sterling Campbell’s Bush Pilot is a watchable bad movie, but just barely. The acting and sound editing are atrocious, but the plot is decent — if predictable — and the whole thing moves along at a nice clip and doesn’t overstay its welcome. Also, if you have a deep and abiding love of Canada like I do, it’s worth checking out, because there just aren’t that many Canadian features from the 1940s.

Bush Pilot takes place in the little village of Nouvelle, Ontario. Red North (Austin Willis) is the hotshot bush pilot of the title. He flies people and cargo where they need to go in the vast north country, and also performs altruistic feats of derring-do, as we see in the first scene of the film.

Red lands his pontoon plane in the water next to a signal fire and flies a little girl with two broken legs back to civilization. When he approaches Nouvelle, however, he’s told by his ground crew that there is zero visibility. No way in. But Red and his gigantic aviator shades always get the job done, especially when a little girl who needs medical attention is in his care, so he looks for the smallest opening in the clouds, and when he finds it, he dives.

Red North’s got it all figured out. He’s built his charter from the ground up, and runs it alongside a sweet old lady named Mrs. Ward (played by Florence Kennedy, who despite her gray hair and makeup looks like she’s about 35). Mrs. Ward runs a summer resort with her daughter Hilary (Rochelle Hudson) and younger son Chuck (Frank Perry). Hilary loves Red, and doesn’t understand why he won’t take a nice, stable job flying for Trans-Canada Airlines. Chuck, a mechanic who sometimes works on Red’s floatplane, idolizes Red, and wants to be a bush pilot himself.

Trouble comes to town in the form of Red’s half brother, Paul Girard (Jack La Rue), who plans to start his own charter. Red tells Paul that he’s put in a lot of work here, and if Paul comes in with a slick new plane and sets up another charter across the lake then he’ll just be skimming off the cream.

Later, Red tells Hilary that Paul has always been a thorn in his side. When they were in the service together Paul would deliberately fly out of formation just to make Red look bad … and a couple of Red’s buddies were shot down over the English Channel because of it.

Brother vs. brother is a classic story, and while not quite enough ever comes of it in Bush Pilot, it’s a decent enough plot to buoy the film for its one-hour running time. Paul tries to move in on Hilary, Red’s girl, and needles her younger brother Chuck into flying a dangerous mission that he’s not ready for. Even the least astute viewer will be able to see the handwriting on the wall when the inexperienced Chuck and his bruised ego take a dangerous shipment of nitroglycerin for a ride.

Rochelle Hudson and Jack La Rue, who get top billing, were both born in the United States, but Austin Willis, who plays Red North, is Canadian through and through. He was born in Halifax, Nova Scotia, and was awarded the Member of the Order of Canada (C.M.) in 2002, two years before his death, for his contribution to the performing arts in Canada.

Willis and La Rue are both good actors, and their scenes together are well-played, except when they’re called on to fight each other and none of their punches connect. Rochelle Hudson (not to be confused with the other “Rock” Hudson) isn’t a very good actress, but who can deliver lines like “You know how I feel about nitro. You should…” and not sound silly?

Frank Perry, who plays Chuck, is the worst actor of the bunch, and delivers his lines as though someone pointed a gun at him and told him to “act natural.”

Bush Pilot is a low-budget B movie — all the plane crashes occur off screen, natch — but it’s passable entertainment, all things considered. The trivia section of the film’s IMDb page says that it was filmed in 1945, but not released in the U.S. until 1947. It certainly seems as if it was filmed in 1946, though. That’s what the copyright of the film says, and if you look closely at the newspapers when they fill the screen with plot-advancing details, you’ll see that it takes place over the course of that crazy summer in 1946 when Red and his half brother Paul dueled over the skies of Canada.