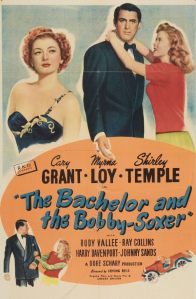 The Bachelor and the Bobby-Soxer was the surprise winner of the Oscar for best original screenplay at the 20th Academy Awards in 1948, beating out the scripts for more “serious” fare like Body and Soul, A Double Life, Monsieur Verdoux, and Sciuscià (Shoeshine).

But just because its win was surprising doesn’t mean it didn’t deserve to win. The Bachelor and the Bobby-Soxer is a very funny film. It’s a latter-day screwball comedy about a handsome artist who is forced — by court order, no less — to date a teenage girl.

Sidney Sheldon’s screenplay treats those jumpin’ and jivin’ post-war kids with affection rather than bemusement or contempt, and he has a keen understanding of the ways teenagers try to act like adults, and how they unwittingly fail.

The dialogue might not be a completely accurate evocation of the way real bobby-soxers and their jalopy-driving boyfriends actually talked (did any kid before this movie came out actually say that they felt “sklonklish”?), but the characterizations all feel right.

Former child star Shirley Temple — all grown up (sort of) — plays the bobby-soxer of the title, a 17-year-old high school student named Susan who lives with her older sister. Her older sister just happens to be a judge, and when the film begins, the Honorable Margaret Turner (Myrna Loy) is presiding over a case involving a kerfuffle at a nightclub between a couple of brassy gals over the affections of charming artist Richard Nugent (Cary Grant).

Margaret and Susan’s parents are dead, so Margaret is as much of a mother to Susan as she is a big sister. After the initial courtroom scene, the stage is set for the sparks of disapproval to fly as soon as Margaret learns that the object of her little sister’s affection is the same Lothario she saw in court.

Most of the humor in The Bachelor and the Bobby-Soxer comes from the fact that Richard has absolutely no desire to be with Susan, but is ordered by the court, under the recommendation of a psychologist, to take her out on dates so his mature-man forbidden fruit will sooner wither and die, and she’ll go back to her sweet, somewhat dumb high school boyfriend, Jerry (Johnny Sands).

Susan is mature for her age, but she’s still a 17-year-old. Watching Cary Grant suffer through taking her to Sunset High School basketball games and dates at the ice cream shop are some of the funniest bits I’ve seen in a long time.

Cary Grant — no stranger to screwball comedies — has an arch, deadpan comic style that’s perfectly suited to the material. Temple is really great in this movie, too. Like Deanna Durbin, she was an impossibly cute child star who blossomed into an engaging adult performer without missing a beat. And Myrna Loy is wonderful to watch, as always. It doesn’t matter that she was old enough to be Temple’s mother when she made this movie. She barely looks a decade older, and she matches Cary Grant beat for beat in all their scenes together.

The Bachelor and the Bobby-Soxer is a great comedy that stands the test of time. 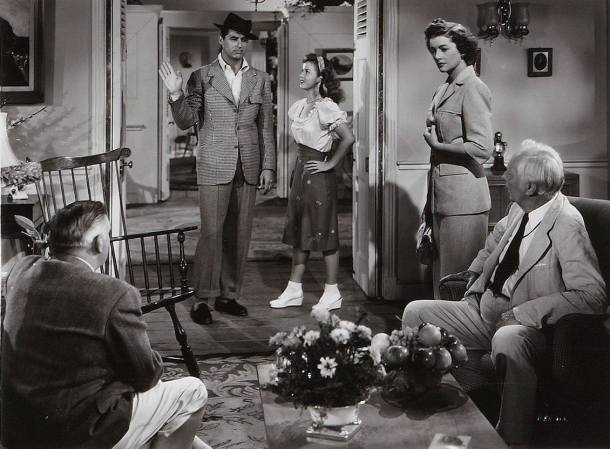