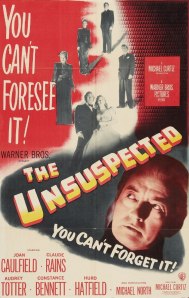 If you’re looking for proof that a mystery doesn’t have to be difficult to figure out to be thoroughly involving, look no further than Michael Curtiz’s The Unsuspected.

Claude Rains stars as Victor Grandison, the “genial host” of the radio program The Unsuspected on the fictional WMCB network. Grandison has turned his fascination with gruesome crimes into a lucrative career recounting tales of real-life murders to a nation of rapt listeners.

Roslyn Wright (Barbara Woodell), Grandison’s secretary, is the killer’s first victim. She’s working late in Grandison’s mansion in Croton, New York, when the door opens and a man’s shadow is thrown over the wall behind her. He strangles her, then hangs her from a chandelier to make it look like suicide.

Grandison lives with his niece, Althea (Audrey Totter), whom he maneuvered into seducing and then marrying Oliver Keane (Hurd Hatfield), who was set to marry Grandison’s other niece, Matilda Frazier (Joan Caulfield). Matilda is currently missing, presumed dead, after the ship she was traveling on was lost at sea. Althea is a grasping, scheming young woman who will do anything for money. Her husband Oliver really loved Matilda and has seemingly been on a bender since he married Althea. 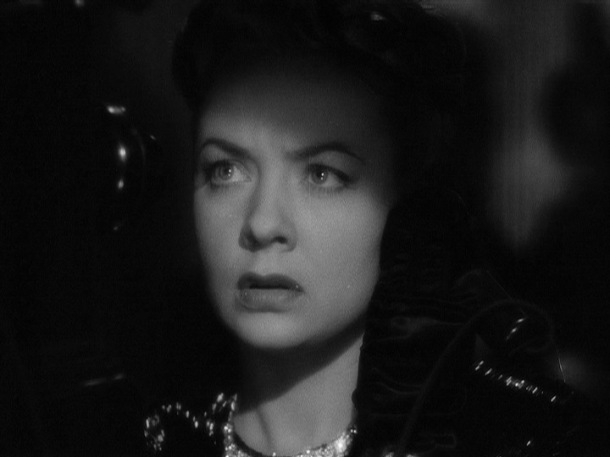 The plot kicks into gear when Steven Francis Howard (Ted North) shows up, claiming he married Matilda shortly before she was lost at sea, and consequently is the heir to her fortune. This news is not taken well by Grandison, who has been moving the people in his life around like chess pieces in order to gain control of Matilda’s fortune. 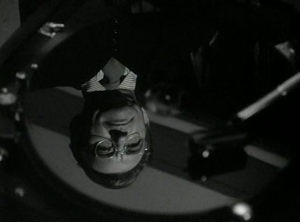 Part of the fun of The Unsuspected is how the entire thing plays out as though it’s one of Grandison’s radio plays come to life. He’s the master of ceremonies, pushing and pulling, scheming and finagling.

He even uses 16″ transcription discs — which were used to record radio shows for later broadcast — as a part of his schemes, to divert and confuse people.

As I said, the identity of the killer isn’t difficult to suss out, and The Unsuspected is more of a thriller than a mystery, but it doesn’t matter. It’s a first-rate thriller, brilliantly directed by Curtiz and gorgeously shot by his cinematographer, Elwood “Woody” Bredell. Even though the story itself is standard stuff, the film is full of arresting visuals, recurring motifs like faces reflected upside down, and brilliant little moments like the one in which Mr. Press (Jack Lambert — recently seen as the villainous “Claw” in Dick Tracy’s Dilemma) sits in a dark hotel room. The neon sign outside says “Hotel Peekskill,” but when the shot cuts to inside the room, all we can see is “kill,” blinking on and off hypnotically. 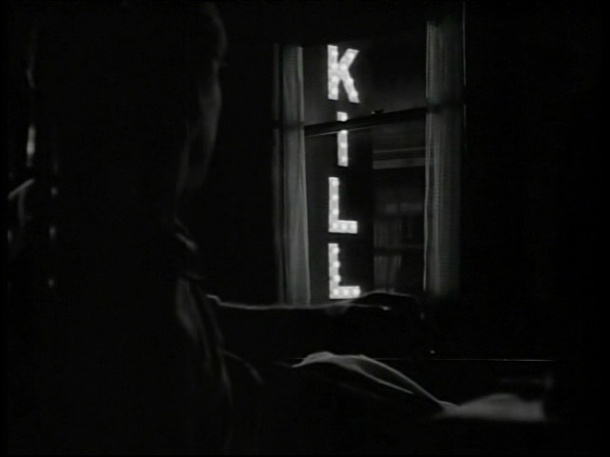 The film isn’t perfect. Ted North isn’t a very good actor, and his scenes lack a certain something. (Interestingly, North is listed in the opening credits as “Introducing Michael North,” even though this was his last film. It was the first time he was credited as “Michael,” not “Ted,” but he’d had significant parts in plenty of films before, most recently The Devil Thumbs a Ride.)

But Curtiz wisely doesn’t make North the focus of the film, and allows Rains to carry things, propelled by taut pacing and Franz Waxman’s compelling score. Aside from North, the actors are all good, especially Totter, whose role is enjoyably juicy. I also really liked Constance Bennett as Grandison’s witty, smart-mouthed assistant, Jane Moynihan. She delivers my favorite line of the picture: “After slaving all day over a hot typewriter, there’s nothing I like better than a swan dive into a bottle of bourbon.”

If you enjoy classy, well-made thrillers, The Unsuspected is well worth seeking out.