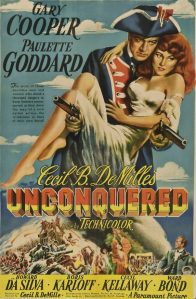 DeMille was 65 years old when he directed Unconquered, and by that point in his career he knew his way around an over-budget spectacle. (Unconquered cost almost $5 million to make, a king’s ransom in 1947.)

Most of the money shows up on screen, though. This is a great-looking picture. It drags a little in places, but for the most part it’s a fun ride. There are a few standout action set pieces — like a canoe chase that ends with a drop straight down a waterfall — but the talky bits are pretty enjoyable, too, even if they’re straight out of a potboiler.

Unconquered, which is based on Neil H. Swanson’s novel The Judas Tree, takes place in 1763, when Fort Pitt marked the end of the known and the beginning of the unknown in America. Located where one can now find Pittsburgh, the fort was the last outpost of civilization in the New World, surrounded by a vast forest filled with hostile Indians.

A beautiful Englishwoman named Abigail Hale (Paulette Goddard) stands trial for the murder of the royal officer who was killed when she was helping her brother fight off the King’s press gang. She is given a choice, face execution in England or be sold as a bond slave in Norfolk, Virginia. 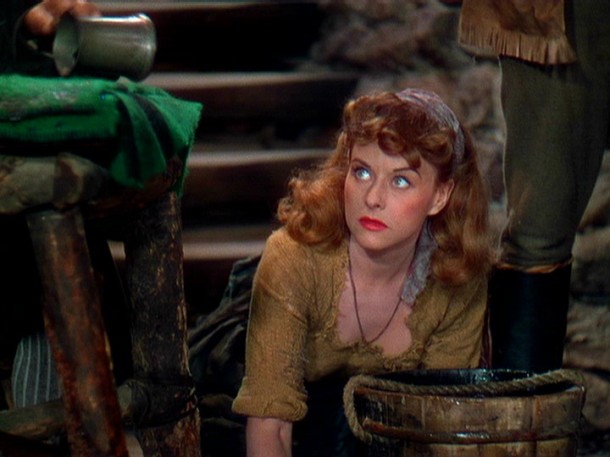 Naturally, she chooses life over death, but life as a bond slave is no picnic, especially when she’s bought by the villainous arms trader Garth (Howard Da Silva). The handsome Capt. Christopher Holden (Gary Cooper) outbids Garth and then casually gives Abby her freedom, but the treacherous Garth makes a deal with the slave trader to double-sell her and retakes possession of her.

Garth’s villainy isn’t limited to his treatment of beautiful white female slaves. He also has a monopoly on the lucrative beaver-fur trade west of Fort Pitt, and will do anything to maintain it, including arming the hostile Indian tribes to prevent white settlement beyond the Alleghenies. 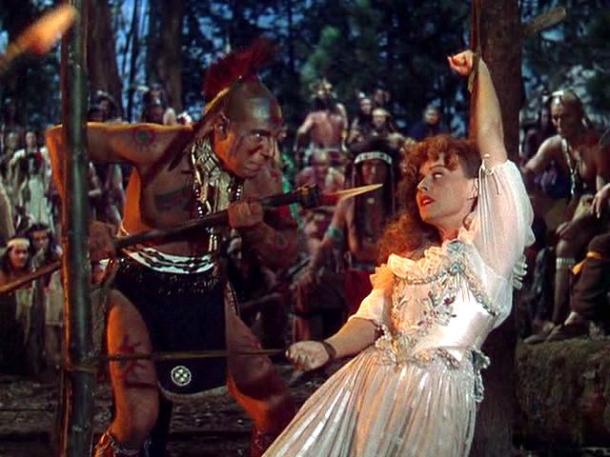 The chief of one of those hostile Indian tribes is named Guyasuta, and he’s played by Boris Karloff, who’s always fun to watch. Guyasuta’s medicine man, Sioto, is played by Marc Lawrence, a regular in gangster movies. The scene in which Capt. Holden tricks Guyasuta and Sioto into releasing the captive Abby by using his “magic” compass was the high point of ridiculousness in the film, but in a movie like Unconquered, once you’re along for the ride, the more ridiculous the better. 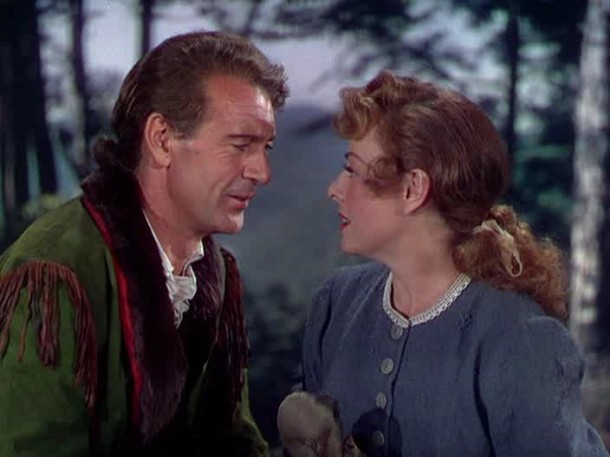 Cooper and Goddard were both a little too old for the roles they were playing in Unconquered, but they were both still extremely attractive, so it didn’t bother me that much. The action in the film is well-staged, especially the final battle for Fort Pitt, which is heavy on the pyrotechnics. Who cares if it’s all a little hokey? No one does epics like Cecil B. DeMille.

Incidentally, Unconquered was the highest grossing film of 1947, with total ticket sales of more than $6 million. So at least it made its money back.