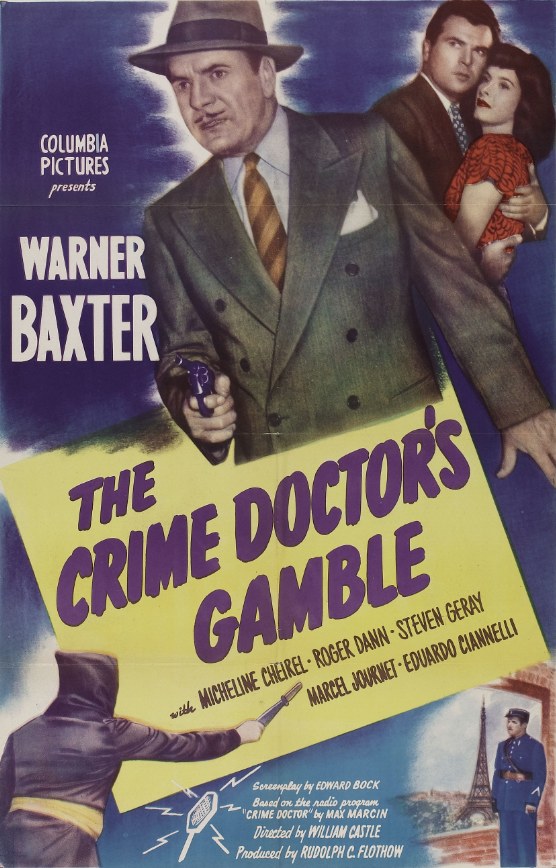 William Castle’s 66-minute mystery The Crime Doctor’s Gamble was the ninth film in the series of programmers from Columbia Pictures.

Based on Max Marcin’s radio series Crime Doctor (1940-1947), the films starred Warner Baxter as Dr. Robert Ordway, a former amnesiac and reformed criminal who now works as a psychiatrist and solves mysteries in his spare time.

Every entry had a little something special to distinguish it from all the other entries. The gimmick of The Crime Doctor’s Gamble is that it takes place in Paris, which is a step up from the hillbilly setting of the last entry in the series, The Millerson Case (1947), which was my least favorite of the Crime Doctor features so far.

Dr. Ordway is in Paris for two weeks, and has three lectures to give. He’s also visiting his old friend Inspector Jacques Morrell (Marcel Journet), but he doesn’t intend to become involved with any police matters during his time in Paris.

After a champagne-soaked night on the town, Inspector Morrell and Dr. Ordway go to a little hole in the wall club with a rooster on the door, where they watch a couple of very acrobatic dancers — a man and a woman whose act includes such spectacles as the woman being swung around by her hair.

The dancers are followed on stage by a man dressed all in black who wears an executioner’s hood and throws knives at a woman wearing a white porcelain mask. Inspector Morrell muses how ease it would be for a trained knife thrower to commit murder and Dr. Ordway asks him if they’re on a busman’s holiday.

Morrell denies it, but the next morning, back at the Préfecture de Police, Morrell invites Dr. Ordway to talk with murder suspect Henri Jardin (Roger Dann), whose father threatened to cut him out of his will after his marriage to Mignon Duval (Micheline Cheirel), the daughter of the knife thrower they saw the night before.

Jardin remembers going into a rage the night his father was stabbed to death, but doesn’t remember what happened after their argument.

Morrell has a personal interest in Henri. The two men spent time together in a concentration camp during the war. After the war, Henri spent six months in a psychoneurotic institution, but Morrell doubts his guilt.

The mystery in The Crime Doctor’s Gamble is well paced and fairly involving. There’s a good collection of suspects — the Jardins’ butler, Theodore (Jean del Val), who overheard an argument the night of the murder, but thought nothing of it; the Jardins’ attorney, Jules Daudet (Steven Geray) who has never practiced criminal law, but who feels it is his duty to defend Henri for his father’s murder; Anton Geroux (Maurice Marsac), an expert painter of reproductions, or forgeries, depending on who’s doing the buying; the knife thrower, Maurice Duval (Eduardo Ciannelli), who says nothing good would have come of his daughter’s marriage to Jardin, and then says that even though Jardin was stabbed, that’s not how a knife thrower would kill with a knife, and drives his point home by throwing a knife into the door next to Ordway’s head; and, of course, Mignon and Henri … could one of them be guilty?

Despite its soupçon of Parisian flavor, The Crime Doctor’s Gamble is obviously all filmed on the Columbia sound stages. The signs in the film are in French, but all the actors speak English, even when they are not speaking to Dr. Ordway.

If you can overlook the cheapness of the production, however, The Crime Doctor’s Gamble is a good mystery. It’s also the type of series programmer that was on the verge of extinction with the coming popularity of television.