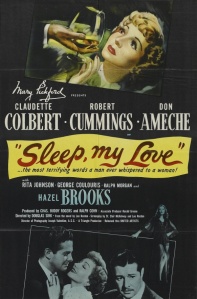 Sleep, My Love is a slick, classy thriller from the slickest, classiest director of all time, Douglas Sirk.

Granted, his greatest work was a few years ahead of him, but even when he was making run-of-the-mill potboilers like Sleep, My Love and Lured (1947), Sirk applied not only his considerable skill as a filmmaker to the material, but also his fetishistic attention to details, and his love of the sumptuous and the glamorous.

The film starts with a bang. Alison Courtland (Claudette Colbert) wakes up from a nightmare on a train, screaming. She doesn’t have any memory of how she got there. The last thing she remembers is going to sleep next to her husband in their palatial home on Sutton Place and East 57th Street.

Oh, and there’s a small pistol in her bag that she doesn’t remember having, either.

Sirk introduces all the players in his mystery early in the film — Alison’s husband, Richard Courtland (Don Ameche), her friend Barby (Rita Johnson), Barby’s brother Bruce (Robert Cummings), Detective Sgt. Strake (Raymond Burr), a mysterious man with horn-rimmed glasses named Charles Vernay (George Coulouris), and the leggy, beautiful Daphne (Hazel Brooks) — but it’s not immediately clear how they all relate to one another.

Much of the pleasure in watching Sleep, My Love comes from seeing how Sirk moves all of his chess pieces around the board. It’s clear from the outset that someone is gaslighting Alison, but who is doing it? And why are they doing it?

This isn’t the kind of mystery in which the solution comes as a complete surprise and is explained by a brilliant detective who gathers all the suspects together in a drawing room; rather, it evolves and reveals itself naturally over the course of the film. It won’t take an astute viewer long to figure out what’s going on, but Sirk isn’t trying to pull the wool over anyone’s eyes. He’s simply making a thrilling film that’s beautiful to look at, and succeeding with aplomb.