The Naked City was — sadly — the second and final collaboration between producer Mark Hellinger and director Jules Dassin. Their first collaboration was the hard-hitting prison drama Brute Force (1947), and we can only imagine what their third collaboration might have been had Hellinger not died on December 21, 1947, at the age of 44.

Hellinger was a hard-living, hard-drinking newspaper columnist. At the height of his popularity, he reportedly had 18 million readers. Like his friend Walter Winchell, Hellinger had an instinctive knack for writing what people wanted to read, and his insight into the criminal demimonde was unparalleled.

Unparalleled except, perhaps, for his love of New York City and all its inhabitants, from Lower East Side deliverymen to Park Avenue titans of industry. In his review of The Naked City in the March 5, 1948, issue of the NY Times, Bosley Crowther wrote that the film was “a virtual Hellinger column on film. It is a rambling, romantic picture-story based on a composite New York episode, the detailed detection of a bath-tub murder by the local Homicide Squad. And it is also a fancifully selective observation of life in New York’s streets, police stations, apartments, tenements, playgrounds, docks, bridges and flashy resorts.”

By “fancifully selective,” of course, Crowther meant that the film was Hellinger’s vision, and Hellinger was more drawn to mugs, thugs, and crooks than he was to schoolteachers or veterinarians. On the other hand, The Naked City is a police procedural (arguably the very first of its genre), and cops spend more time rousting crooks than they do schoolmarms.

The film is so thoroughly Hellinger’s vision that he narrates the film himself. After a guided nighttime tour of the city that never sleeps, full of his trademark witticisms and wry observations, he tells the viewer that his film will attempt to show “…the buildings in their naked stone, the people without makeup.”

The opening sequence introduces us to most of the film’s major players. (Whether or not the first-time viewer will catch everything, however, is another matter.) The two mugs murdering a beautiful young woman at 52 West 83rd Street, the charming Frank Niles (Howard Duff) and his fiancée Ruth Morrison (Dorothy Hart) out at a nightclub, young NYPD detective Jimmy Halloran (Don Taylor) and his wife Jane (Anne Sargent) and their young children at home in Jackson Heights, Queens, and the crotchety old Detective Lieutenant Dan Muldoon (Barry Fitzgerald), whom we see in his undershirt and suspenders, preparing breakfast. 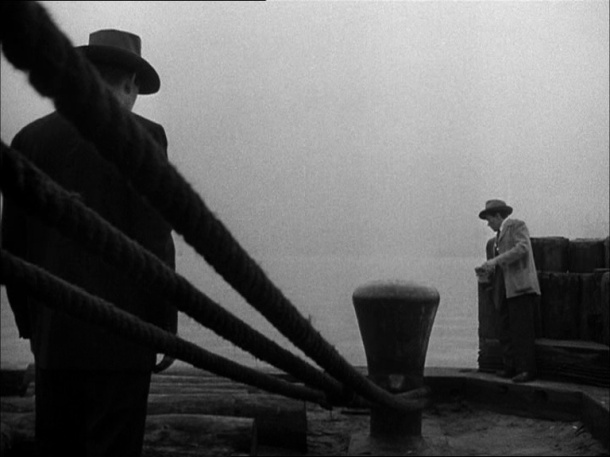 Most of Hellinger’s narration is engaging and fun to listen to. Some of it is even necessary, especially considering that The Naked City was released before Dragnet existed, even on the radio, and the finer points of police procedure might have been unknown to the average viewer. But there are aspects of his narration that don’t play so well. For instance, the images of the city and its inhabitants are powerful on their own. The overlay of Hellinger’s voice-over “thoughts” and “dialogue” for a variety of average New Yorkers captured on film just comes off as hokey.

The film’s biggest weakness, however, is its two leads. Some people find Barry Fitzgerald charming, but I find his whole grumpy leprechaun shtick as Det. Lt. Muldoon — essentially the same role he played as a priest in Going My Way (1944) — annoying. But at least he has a personality, unlike Don Taylor, who plays Muldoon’s young partner and protégé Det. Halloran. Taylor has a “golly gee shucks” attitude and not much else. He also doesn’t seem to know what to do with his face when he’s on camera but doesn’t have any lines.

Taylor and Fitzgerald and their dialogue undercut much of the vérité quality of the film, but certainly don’t ruin anything. As a cinematic experience, I don’t think The Naked City is as satisfying as Brute Force, but it’s still a tremendously entertaining, well-made picture. When Dassin and Hellinger allow the action to speak for itself, as they do in the final, bravura chase along the Williamsburg Bridge, the film is untouchable. 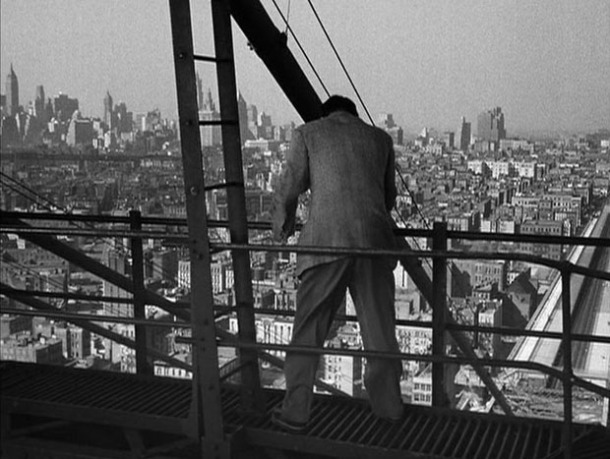