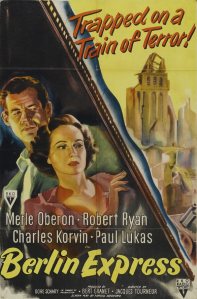 It’s filmed in the semi-documentary style that was popular in the late ’40s. Europeans speak to each other in their own languages, with no subtitles (there is a voiceover narrator to explain to the viewer what’s transpiring), and much of Berlin Express was filmed on location in Paris, Frankfurt, and Berlin. (According to IMDb.com, it was the first Hollywood production in Europe after World War II.)

Berlin Express has stylistic elements of the German “Trümmerfilm” (“rubble film”), like Die Mörder sind unter uns (The Murderers Are Among Us) (1946). The German rubble films used the war-ravaged backdrops that were plentiful in German cities heavily bombed during the war. Berlin Express doesn’t have the same gravitas or overwhelming sense of tragedy as the rubble films, but the location footage gives it a sense of authenticity not found in most run-of-the-mill thrillers.

Compared with Jacques Tourneur’s previous film, the film noir masterpiece Out of the Past (1947), Berlin Express is a lesser effort, but Tourneur is a pro, and every one of his films that I’ve seen has been a work of solid craftsmanship.

The MacGuffin in Berlin Express is a note that falls into the hands of the Deuxième Bureau that reads: “21:45 / D / 9850 / Sulzbach.” The first part seems to refer to a time of day (9:45 PM), but there are Sulzbachs in every occupied zone of Germany. What’s happening? And where will it happen? 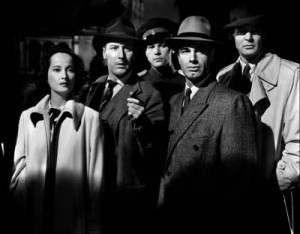 Enter a multinational motley crew of characters traveling aboard the Berlin Express. In compartment A is Robert J. Lindley (Robert Ryan), a United States Government Agricultural Expert. In compartment B is Lucienne Mirbeau (Merle Oberon), a secretary from France. In compartment C is Herr Otto Franzen (Fritz Kortner), once a German industrialist, now a dealer in scrap iron. Compartment D is unoccupied, but is being held for a “person of importance.” Compartment E is shared by two men, a former British soldier named James Sterling (Robert Coote), and a military aide for the Russian Occupation Authority, Lt. Maxim Kiroshilov (Roman Toporow). In compartment F is Henri Perrot (Charles Korvin), once a member of the French Underground, now a man of commerce. And finally, in compartment G, is Hans Schmidt (Peter von Zerneck), whose occupation is a mystery to the viewer (the whistle of the train covers what the narrator is saying, which is a cute touch).

Of course, this is an espionage thriller, so it should go without saying that not everyone is what they appear to be, and there will be at least one big reveal or switcheroo before the credits roll.

Berlin Express was made during that curious little space in time when World War II was over but the Cold War had not yet kicked into high gear. Its villains may not seem very plausible or consequential to modern viewers, but for my money, a good thriller is a good thriller. The voiceover narration is a little heavy-handed, but for the most part Berlin Express keeps things tight, fast-paced, and properly thrilling.