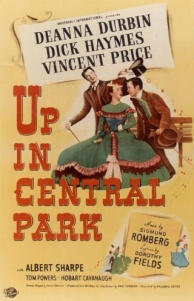 If you’re a regular reader of this blog, you know that I have a special place in my heart for Deanna Durbin.

I think Durbin is one of the most charming, talented, and attractive performers to ever appear on screen. If some of the material she appeared in was beneath her, it’s hard to tell, since she brought the same vivacity, humor, and clear-as-a-bell singing voice to every one of her roles.

Durbin — a.k.a. “Winnipeg’s Sweetheart” — went from nearly single-handedly saving Universal Pictures from bankruptcy at the age of 14 with her first feature, Three Smart Girls (1936), to permanently retiring from acting in 1948 after appearing in her last film, For the Love of Mary.

Up in Central Park was Durbin’s penultimate picture. She was nearly 27 years old, and was tired of working within a stultifying studio system and playing the same type of character she’d been playing since she was 14. After appearing in For the Love of Mary, Durbin married producer Charles David and settled in a small village in rural France. She never appeared in another film.

Up in Central Park was based on the successful Broadway musical of the same name that opened in 1945. It takes place in 19th-century New York and stars another of my all-time favorite actors — Vincent Price — as the notoriously corrupt Boss Tweed.

Wide-eyed Irish immigrant Rosie Moore (Durbin) and her father, Timothy Moore (Albert Sharpe), come to New York with dreams of a better life and are quickly ensnared by the agents of Boss Tweed, who set up Mr. Moore with a plum position as Central Park zookeeper, as well as a little house in the park to call their own.

When things seem too good to be true, they usually are. But Rosie loves her new life, so when a crusading reporter for The New York Times named John Matthews (played by crooner Dick Haymes) tries to convince her that Boss Tweed and his Tammany Hall cronies are no good, she refuses to believe him.

Up in Central Park is an entertaining little musical, but my favorite thing about it was watching the louche Price woo the naive Durbin, as well as chew the scenery on his own. For instance, when Tweed gives his puppet mayor Oakley (Hobart Cavanaugh) his cigar to dispose of and Oakley can’t find a spittoon, Tweed says — in a withering, condescending tone — “We use ashtrays here, Mayor. This isn’t the city hall.”