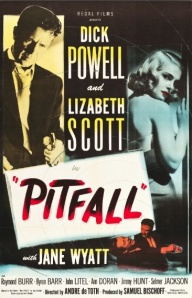 One man’s domestic bliss is another man’s prison.

John Forbes (Dick Powell) has what some men only dream of — a home; a steady job with the Olympic Mutual Insurance Company; an attractive, intelligent, and loving wife (Jane Wyatt); and a son (Jimmy Hunt) who thinks his dad is the greatest guy in the world.

And yet, he’s dissatisfied. It’s a formless sort of dissatisfaction. He grumbles about how fast his son Tommy outgrows his shoes. He tells his wife Sue that the world won’t end if he doesn’t show up at his desk every morning at 9 o’clock. He asks Sue what became of those two young kids they were … the two young kids who were going to build a boat and sail around the world.

“You and fifty million others,” she responds.

“I don’t want to be like fifty million others,” he says.

“But you’re John Forbes, average American, backbone of the country,” she says with a smile.

“I don’t want to be an average American, backbone of the country. I want somebody else to be the backbone and hold me up.”

Later that day — a day shaping up to be like any other — he goes to the apartment of Miss Mona Stevens (Lizabeth Scott), a beautiful but world-weary blonde who received gifts from a man convicted of embezzling.

It’s just part of his job. He doesn’t care one way or the other that one of the gifts he’s recovering is an engagement ring. But Mona sees right through him, and tells him, “You’re a little man with a briefcase. You go to work every morning and you do as you’re told.”

Her words get to him, and he softens towards her. They share a few afternoon drinks in a dark cocktail lounge. They go boating. And he never once mentions his wife or son. 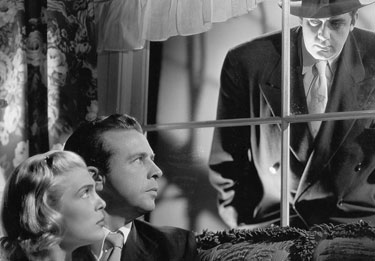 One thing I loved about Pitfall is that its characters are real adult people leading real adult lives. They’re not overblown film-noir caricatures, and their actions all have realistic consequences.

Mona is not a femme fatale who sees in John Forbes an easy mark. Aside from being unusually attractive, she’s an average woman who hates that she was involved with a man who was not only stupid enough to embezzle money to spend on her, but stupid enough to get caught. And she gets involved with John Forbes not because she has a dastardly scheme, but because he’s kind to her and she thinks he’s a decent guy. (Mona Stevens has a lot more in common with Ann Sheridan’s character in Nora Prentiss than she does with Barbara Stanwyck’s character in Double Indemnity.)

But Pitfall is not just a tale of marital infidelity and post-war suburban malaise, it’s a noirish thriller, which means there are some nasty surprises lurking.

One of them takes the form of the angry loser who embezzled for love of Mona — Bill Smiley (Byron Barr), whose prison term is nearing an end. The other takes the hulking form of a creepy private detective who is obsessed with Mona — J.B. “Mac” MacDonald (Raymond Burr).

Pitfall has all the ingredients of a great film noir, but director André de Toth mixes them together in interesting ways, and avoids over-the-top contrivances. Cinematographer Harry J. Wild’s solid but unpretentious shots of Los Angeles anchor the film, the actors all deliver really good performances, and Karl Kamb’s screenplay (based on Jay Dratler’s novel The Pitfall) is full of wit and intelligence.