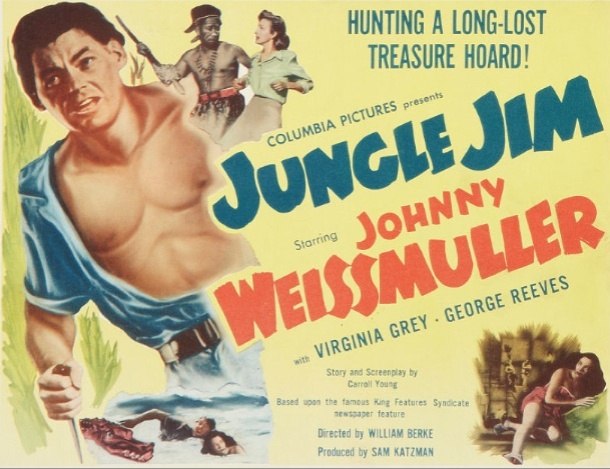 It’s the end of an era, and the start of a new one. Tarzan and the Mermaids (1948) was Johnny Weissmuller’s last time playing Tarzan, and this was his first time playing Alex Raymond’s comic-strip hero Jungle Jim.

Raymond was one of the greatest writer-artists to ever work in the medium of the funny pages, and in addition to Jungle Jim he also created Flash Gordon, Secret Agent X-9, and Rip Kirby.

Unlike other jungle heroes like Tarzan, Ka-Zar, Ka’a’nga, and Sheena, Jungle Jim operated in Southeastern Asia, not Africa, and he wore a full set of clothes.

For the purposes of a Saturday-afternoon flick, however, it’s clear that director William Berke and his production team didn’t spend much time differentiating their highly fictionalized jungle world from the highly fictionalized version of Africa that appeared in most jungle B-movies.

In fact, I’m unclear after one viewing whether this film was meant to take place in Africa or Southeastern Asia. There were references to the Masai, but the “natives” being referred to were not black Africans, but rather the type of “natives” common to films produced by “Jungle Sam” Katzman; in other words, they’re white actors who look like Brooklyn teamsters wearing turbans.

The biggest difference between Jungle Jim and the Tarzan films comes when we see Weissmuller walk out of the jungle in the first shot of the film, fully clothed and wearing a Panama hat, which is an odd sight after so many years of mostly only seeing him in loincloths of various sizes.

But never fear. Most of the things that made Weissmuller an action star are still on display. It takes exactly 2 minutes and 4 seconds from the moment the film begins before Weissmuller takes off his shoes and leaps into the water to attempt to save a terrified native from a man-eating leopard. Even though Weissmuller is older and heavier as Jungle Jim than he was in a lot of his Tarzan films, he’s still an Olympic champion swimmer, and no other B-movie actor could knife through the water like he could. (Well, maybe Buster Crabbe could.) 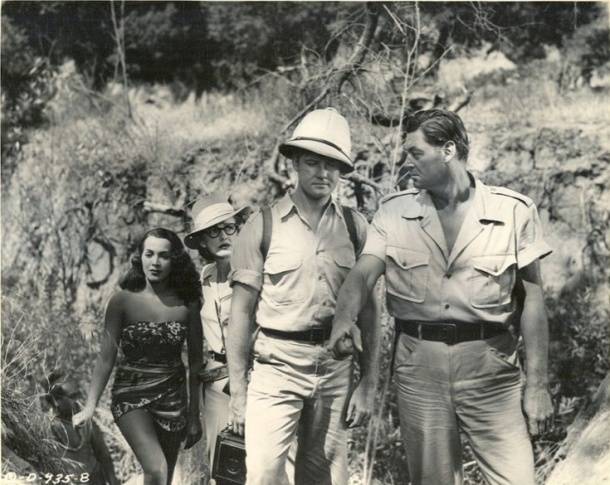 The plot of Jungle Jim is the typical jungle-adventure-film malarkey. A scientist named Dr. Hilary Parker (Virginia Grey) is searching for the lost temple of Zimbalu, which has great archaeological value. Zimbalu may contain gold, but — more importantly — it might be the source of a substance that could be used to cure infantile paralysis if placed in the right hands. (Paging Dr. Jonas Salk!)

Curing polio is Dr. Parker’s goal, but it’s not the goal of safari member Bruce Edwards (played by George Reeves, who would go on to play Superman on TV in the ’50s). Edwards is only in it for the gold, and doesn’t care who he has to stab in the back to get it.

There’s also a beautiful “native” girl named Zia (Lita Baron), who doesn’t know why Dr. Parker dresses and acts like a man, and is jealous of the attention Jungle Jim pays to Dr. Parker.

Like most low-budget jungle adventures, Jungle Jim employs lots of stock footage. An entire sequence is edited to make it appear as if Dr. Parker’s dog Skipper is interacting with a little monkey. There’s also a crocodile attack, a monkey stealing honey, and a crow smoking a pipe. The emphasis in Jungle Jim is on action above all else. An elephant stampede is immediately followed by a rock slide, which is followed by the shapely Zia dancing spastically around a campfire.

Jungle Jim is dumb, but plenty of fun if you like B-movies set in the jungle. If you like beautiful women, there’s plenty to enjoy, too. Grey and Baron are both stunning. Dr. Parker is supposed to be mannish, but those glasses don’t cut it.