They’re both good films, and they presaged greater things on the horizon for Stewart, who was already a huge star, but was now on his way to becoming a bona fide western star, too. Broken Arrow and Winchester ’73 were also a sign of things to come, since the ’50s was the decade that the Hollywood western matured, opening itself to new possibilities and more complex storytelling, like The Gunfighter, released around the same time.

Broken Arrow and Winchester ’73 would make an entertaining double bill, but unless you’re one of those people who can’t stand to watch movies in black & white, I guarantee that you will find Winchester ’73 the more exciting and engaging film.

Broken Arrow is well-made and well-acted, but it’s more significant for its portrayal of American Indians than it is for being a cracking piece of entertainment, like Winchester ’73 is. 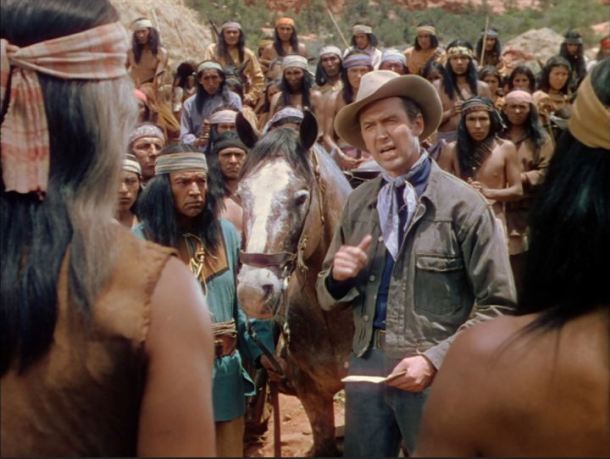 Not only does Broken Arrow present a sympathetic view of the Apache and their leader, Cochise, but it acknowledges that the beginning of the war between the Apache and the US Army involved broken truces and wholesale slaughter on the part of the cavalry against the Apaches. The film does a good job of depicting the Arizona territory in the midst of war; both sides hate each other with a passion, and enough atrocities have been committed on both sides for peace to be a far-fetched hope.

Enter Tom Jeffords (James Stewart), a former cavalry scout who learns firsthand that the Apaches are far from the inhuman savages he always believed them to be. He desires to broker a peace deal between Cochise (Jeff Chandler) and the United States, so he learns everything he can about Apache customs, beliefs, and language, and sets off to meet Cochise. 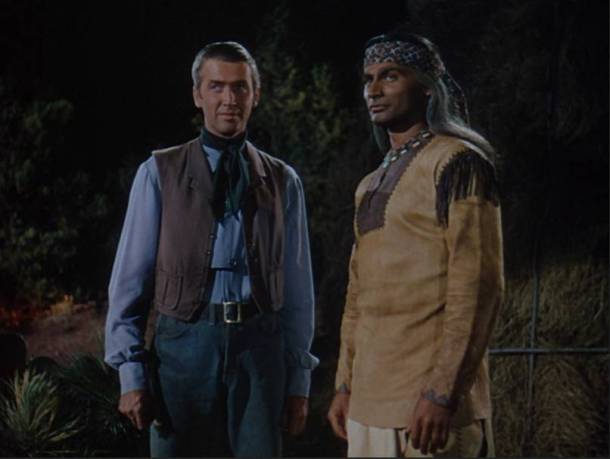 Broken Arrow is based on the historical novel Blood Brother by Elliott Arnold. The screenplay was written by blacklisted writer Albert Maltz. (The writer listed in the credits of the film is Michael Blankfort, who acted as a front for Maltz.)

The main problem with the movie is that while there are a bunch of Native American actors employed as extras, most of the key players among the Apache are portrayed by white actors wearing makeup.

I have to give credit to Jeff Chandler, who delivers a great performance as Cochise. I listen to a lot of old radio shows, and at first it was weird to hear a voice I recognized so well coming out of the mouth of a supposed Apache. (Chandler played the science teacher, Mr. Boynton, on Our Miss Brooks, but I know him best as the radio version of private detective Michael Shayne, “that reckless, red-headed Irishman.”) But once I settled in, I enjoyed Chandler’s portrayal, which is nuanced and mostly free of stereotypical vocal inflections.

Unfortunately, I can’t say the same for Debra Paget as “Sonseeahray,” Tom Jeffords’s historically nonexistent love interest. The 16-year-old Paget is cute as a button, but she’s about as convincing an American Indian as Disney’s Pocahontas.

The most significant Apache character in the film played by an actual Native American is Geronimo, who is played by Jay Silverheels (best known as the Lone Ranger’s best friend Tonto on the long-running TV series). Silverheels has one really good dramatic scene as Geronimo and then leaves the Apache tribe to continue waging war against the United States on his own.

Delmer Daves would go on to make one of my favorite westerns of the ’50s, the original 3:10 to Yuma (1957). Broken Arrow is also good, but I wouldn’t quite call it a classic. It’s incredibly progressive in a lot of ways, and a refreshing change from westerns in which American Indian tribes were faceless hordes, so if you can get past the cognitive dissonance of seeing Apache characters played by white actors, there’s a lot to recommend Broken Arrow.