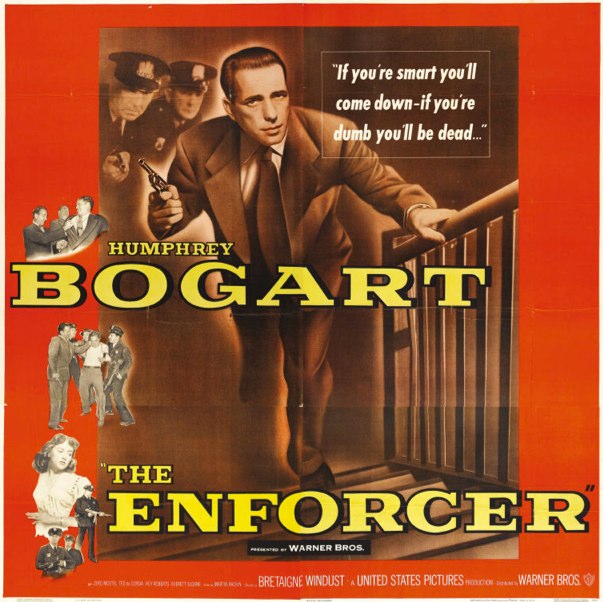 I wasn’t expecting much from this fictionalized account of the exploits of Murder, Inc., but I ended up being completely blown away. Although the director listed in the credits is the lavishly named Bretaigne Windust, the bulk of the film was actually directed by Raoul Walsh after Windust was hospitalized with a serious illness.

Walsh is a director I love. He made lean, tough movies that are also incredibly entertaining. He did some of his best work with Humphrey Bogart, like The Roaring Twenties (1939), They Drive by Night (1940), and High Sierra (1941).

The Enforcer was the last time Bogart and Walsh worked together, and while it’s basically a low-budget B movie with an A-list star, Walsh’s crisp, fast-paced direction and facility with hard-boiled conventions elevate the picture.

Even though Bogart is the only big name in the credits, this movie has an outstanding line-up of male character actors. The sheer number of ugly mugs in this movie is overwhelming. Ted de Corsia, Zero Mostel, Everett Sloane, and Bob Steele were never going to win any beauty contests, but they are all incredibly convincing as vicious killers.

Also, the black & white cinematography by Robert Burks is an object lesson in how to make simple sets look like works of art. A lot of people will tell you that The Enforcer is not really a film noir because it’s a straightforward D.A. & cops vs. gangsters story, but for me, noir is primarily a style, and this is a movie that oozes style.