Producer David O. Selznick was never able to equal the success of Gone With the Wind (which received the Oscar for best picture in 1939), but it wasn’t for lack of trying.

His next film, Rebecca (1940), also won the Academy Award for best picture, and his films Since You Went Away (1944) and Spellbound (1945) were both nominated. With the advent of the auteur theory, Rebecca and Spellbound are remembered primarily as Alfred Hitchcock’s films, but Selznick’s power and influence in Hollywood during the ’30s and ’40s can’t be underestimated.

Selznick spent two years making Duel in the Sun, at an unprecedented cost of $6 million. He spent another $2 million on promotion, which was equally unheard-of at the time. (Some of the more novel advertising methods were 5,000 parachutes dropped at the Kentucky Derby and body stickers handed out at beaches that spelled out the title of the film on skin after a day of sunbathing.)

The trailer for the film proclaimed that it was “the picture of a thousand memorable moments,” and that’s true. The problem is that one memorable moment after another doesn’t necessarily add up to a single memorable film. The cinematography by Hal Rosson, Lee Garmes, and Ray Rennahan is occasionally breathtaking, and there are a few shots that are among the best I’ve ever seen on film, but there’s nothing to anchor them.

Like Gone With the Wind, Duel in the Sun was credited to a single director, but there were more directors who worked on the film who never received credit. King Vidor is the man who got his name in the credits, but Otto Brower, William Dieterle, Sidney Franklin, William Cameron Menzies, Josef von Sternberg, and even Selznick himself sat in the director’s chair at one point or another during production.

Anyway, if you can make it through that, you can make it through anything, even an insane story about a “renegade Creole squaw-man” named Scott Chavez (Herbert Marshall) who’s hanged for murdering his lusty Indian wife and her lover. Before his execution, Mr. Chavez arranges for his half-breed daughter, Pearl (Jennifer Jones), to live with his second cousin and old flame Laura Belle (Lillian Gish).

The kind-hearted Laura Belle welcomes Pearl with open arms, but her husband, the wheelchair-bound Senator Jackson McCanles (Lionel Barrymore), is less charitable. “I didn’t spend thirty years on this place to turn it into no Injun reservation,” he growls.

Much of the film is a push-pull between the two McCanles sons, the gentlemanly Jesse (Joseph Cotten) and the brutish Lewt (Gregory Peck, in a rare role as a villain). Pearl is never really accepted into the family, and lives in servants’ quarters. Shortly after she arrives to stay, Lewt swaggers into her room one night and forces himself on her. She kisses him back savagely at the last second, so it’s not quite rape, but the implication is still there. 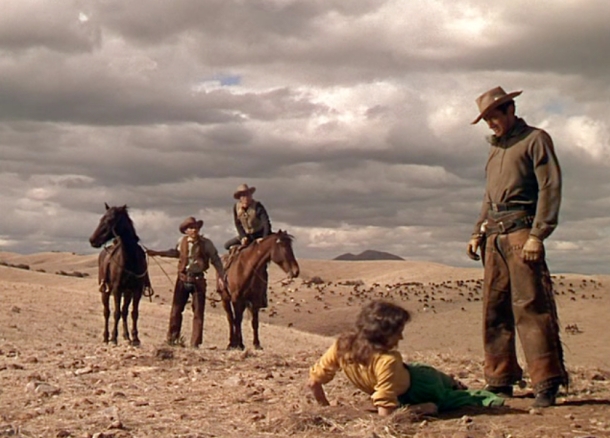 There are a lot of jump cuts in Duel in the Sun. Some are necessary — like when Cotten slaps Peck across the face and then the scene cuts to a closer shot in which Peck’s cheek is scratched and blood is pouring out of his mouth — but most seem like a byproduct of sloppy filmmaking, or a big-budget epic sprawling out of control.

Lewt promises to marry Pearl, but quickly backs out. When a kindly rancher named Sam Pierce (Charles Bickford) proposes to her, however, Lewt murders him. Afterward, he tells Pearl, “Anybody who was my girl is still my girl. That’s the kind of guy I am. You know … loyal.”

Duel in the Sun came to be pejoratively known as Lust in the Dust, which is a more apt title. Jennifer Jones appears in all manner of undress and compromising positions, and looks great doing it. It’s sometimes called a “Freudian” western, but I didn’t see much that was Freudian about it, except for the stunning final 10 minutes. The finale is the most overwrought and ridiculous expression of the intertwined relationship between Eros and Thanatos that I’ve ever seen.

Duel in the Sun was never a hit with critics, but it was the second biggest box office success of 1947. It ran into more censorship trouble than any film since Howard Hughes’s “roll-in-the-hay” western The Outlaw (1943), which starred Jane Russell and her enormous breasts, and at least some of the notoriety of Duel in the Sun came from the very public knowledge that Jennifer Jones and David O. Selznick were both cheating on their spouses with each other.

In 1948, Selznick retired from producing films. Duel in the Sun might not be the apotheosis of his 20 year-long career in terms of quality, but it’s probably the wildest, weirdest, sexiest, and campiest movie that the chain-smoking, amphetamine-popping Lothario ever produced. And it sure is pretty to look at. 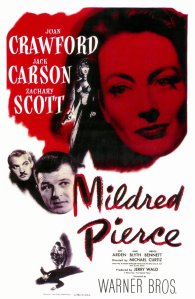 If you’ve only seen the film adaptation of James M. Cain’s 1941 novel Mildred Pierce, you’re forgiven for never wondering whether the striking murder set piece that opens the film and informs the entire picture was an invention of the producer and the screenwriters that never occurred in the novel.

It was. But it’s a brilliant invention. Even though long stretches of Mildred Pierce (told in flashback) are essentially melodrama, the sequence that opens the film is one of the greatest examples of film noir I’ve ever seen. It is nighttime. Heavy shadows fall over caddish playboy Monte Beragon (Zachary Scott), resplendent in a tuxedo, as he is gunned down in a Malibu beach house. Not every shot hits him. A few smash into the mirror behind him. But enough hit him to kill him, and he falls to the floor. Mildred Pierce (Joan Crawford) flees from the house, walks down the boardwalk, and looks as though she is contemplating suicide by jumping into the Pacific Ocean, but is stopped by a policeman. She talks her way out of the situation and later entices the beefy and amorous Wally Fay (Jack Carson) back to the house on the beach and locks him in, with the intention of pinning the murder on him. The scenes in which Wally realizes Mildred has left him alone in a locked house with a corpse and a revolver and he attempts to escape are stunning, and are one of the greatest noir sequences in film history.

Unlike Billy Wilder’s Double Indemnity (1944), another noir classic adapted from a novel by Cain, Michael Curtiz’s Mildred Pierce takes a lot of liberties with its source material. This is partly due to necessity. I loved Cain’s novel, and found it every bit as good as his 1934 crime classic The Postman Always Twice and more believable than his 1937 novel Serenade, which is about a male opera singer who loses his voice after he gives in to homosexual temptation. Cain’s Mildred Pierce contains no murders, just plenty of bad behavior, and the most despicable character waltzes off at the end with no punishment in sight. Apparently the moral tone of the novel was troubling to the Breen Office, so producer Jerry Wald devised a murder plot with a culprit who could be punished, which sufficiently palliated the concerns of producer and studio head Jack L. Warner, and he purchased the rights to the novel in 1944. The script for the film went through eight different versions before Ranald MacDougall’s version was accepted. William Faulkner and Catherine Turney both made uncredited contributions. (And we can all thank our lucky stars that Faulkner’s scene in which Mildred’s maid, played by Butterfly McQueen, consoled Mildred while singing a gospel song was either never filmed or was left on the cutting room floor.)

Mildred Pierce is a fantastic film. Crawford’s longtime nemesis Bette Davis and fellow fading star Rosalind Russell were both considered for the lead role, but both turned it down. It’s impossible for me to imagine anyone but Crawford playing Mildred Pierce. She brings not only her finely controlled histrionics to the role, but her own life history as a woman who crawled up from nothing.

When the picture opened, it was a huge hit, both with critics and audiences. It was nominated for best picture, best actress, best supporting actress (for Eve Arden, who plays Mildred’s wisecracking best friend), best writing, and best black and white cinematography. Joan Crawford won the Academy Award for best actress, and accepted the statuette at home, where she was sick in bed. (Her adopted daughter Christina claims she was faking, but this is hardly the worst accusation she has lobbed at her mother.)