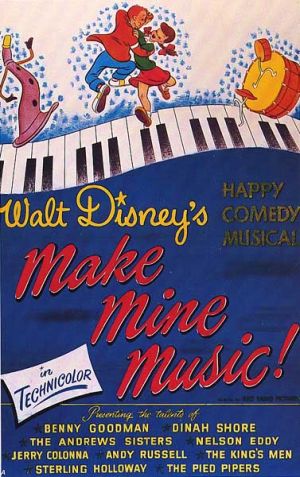 During World War II, however, the U.S. Army contracted Disney to make training and instruction films like Victory Through Air Power (1943), as well as propaganda shorts like Education for Death: The Making of the Nazi (1943), which is still an effective and chilling piece, and Der Fuehrer’s Face (1943), in which Donald Duck has a nightmare and imagines himself a factory worker for the Third Reich. (Have you ever wanted to see Donald Duck read Mein Kampf and give the Sieg Heil salute while quacking “Heil Hitler!” over and over? Of course you have. Check it out if you haven’t already seen it.) These films didn’t generate any income for the studio, so in the post-war years Disney’s feature-length animated films were inexpensive repackagings of short subjects; Make Mine Music (1946), Fun and Fancy Free (1947), and Melody Time (1948).

Like any compilation, Make Mine Music is a mixed bag. It begins with “a rustic ballad,” as the title card tells us. The King’s Men sing “The Martins and the Coys,” a comedic take on the famous Hatfield and McCoy feud of the late 19th century. Sadly, hillbilly humor is something we’ve lost in this country. As cable TV has spread to the farthest reaches of the nation and more people have moved from remote rural areas to suburbs, barefooted hicks who tote shotguns, sleep with their arm around a pig, drink “mountain dew” (a.k.a. moonshine), and never wear a shirt under their overalls have gone the way of the dodo. In 1946, however, there were still plenty of those “reckless mountain boys” running around, and this segment lampoons them in grand style. The Martins and the Coys blast one another to pieces with shotguns until their clans are each left with just one representative. One a young man, the other a young woman. The punchline? They fall in love, get married, and then the bickering and the feuding start all over again, while their deceased ancestors watch with approval from their perches on clouds up in hillbilly heaven.

The second feature is “a tone poem.” The Ken Darby Chorus sing “Blue Bayou” while what appears to be an egret lazily flies around a blue bayou full of dark, dripping colors. Eventually the egret meets a second egret and they slowly disappear into the sky together. This short is audiovisual heroin, and I felt as if I was being shot up against my will.

Luckily, the third feature, “a jazz interlude” featuring Benny Goodman and his Orchestra called “All the Cats Join In,” really knocks it out of the park. Stylized images are created in a sketch book by an oversized pencil and then come to life. First a cat is drawn, then erased, then replaced by an Archie Andrews lookalike. There are even a few risqué images, with a bobby soxer jumping in the shower to get ready for a date, then running around barely covered by a towel, then jumping into her clothes and exposing her frilly underthings while bent over and rummaging around in her closet. All the while her younger sister mimics her every move. Then it’s into the jalopy with the rest of the gang and off to the malt shop. The music in this one is genuinely good, and the animation style looks about 15 years ahead of its time.

At this point, the structure of Make Mine Music becomes clear, as this fun and jazzy number is followed by another mawkish piece of visual barbiturate — “a ballad in blue” — featuring Andy Russell singing “Without You.” Rivulets of water running down a windowpane create one maudlin image after another, none of them memorable, but all designed to evoke a sense of pretty desolation — trees without leaves against a sunset, etc. Eventually we come back in through the window and the piece ends with the image of a dark blue sky surrounded by black with a single star in the sky, mirroring the lyrics of the song. This short is not recommended for the clinically depressed or anyone who’s just been dumped.

True to the established pattern, the next short is tons o’ fun. It’s “a musical recitation” by Jerry Colonna of “Casey at the Bat.” It opens with a series of turn-of-the-century stills and enlightened lyrics like, “The ladies don’t understand baseball a bit, they don’t know a strike from a foul or a hit,” followed by typical goofy “humorous” Disney animation. It’s all silly fun, and the final strikeout sequence is especially over the top.

Unsurprisingly, this is followed by a “ballade ballet” with animated versions of dancers Tania Riabouchinskaya (listed in the credits as just “Riabouchinska”) and David Lichine, accompanied by Dinah Shore singing “Two Silhouettes.” The white silhouetes are clearly based on real figures, and are gag-inducing, but can’t hold a candle in the gorge-rising department to the chubby white cherub silhouettes who fly in at the very end to drape the dancers with something or other.

Next up is “a fairy tale with music,” which is a version of Prokofiev’s “Peter and the Wolf” narrated by Sterling Holloway. If you took a field trip to the symphony when you were a child, chances are “Peter and the Wolf” was on the program, since it’s a great way to introduce young people to a variety of instruments and the concept of musical motifs. Like “Casey at the Bat,” this segment is serviceable, but not wildly memorable.

Following this is the Goodman Quartet performing “After You’ve Gone.” Little anthropomorphic instruments dance around. It’s short and sweet.

The high point of Make Mine Music is “a love story” sung by the Andrews Sisters, “Johnnie Fedora and Alice Bluebonnet.” This one is just adorable. Anthropomorphic hats have the potential to be really creepy, but they’re both pretty cute — especially Johnnie, whose expressive eyes are formed from the divets in the front of the fedora above the hat band. Long story short, Johnnie Fedora and Alice Bluebonnet sit next to each other in a department store window, fall in love, are separated, and eventually find each other again.

Make Mine Music was the first movie my mother remembers seeing. When I was a little kid, I asked her about the first movie she’d ever seen, and the only thing she specifically remembered was “Johnnie Fedora and Alice Bluebonnet.” She even sang the first few bars of the song, and got the melody just right, although not with the Andrews Sisters’ adenoidal twang.

The final short is an “opera pathetique” performed by Nelson Eddy, who does all the voices for the “tragic story” of “The Whale Who Wanted to Sing at the Met.” An impresario from the Met named “Teti Tati” takes off after Willie the whale after reading about him in the newspaper, because he believes that an opera singer has been swallowed by the whale, like Jonah. When Teti Tati discovers that Willie can sing in three voices, he believes that the whale has swallowed three different opera singers. (We get to see a whole lot of Willie’s three vibrating uvulas.) There follows a fantastic dream sequence in which Willie imagines himself in a variety of roles, his bulk spilling out over the stage. He showers himself with “tears” from his blowhole while singing Pagliacci. He appears in flames as Mephistopheles. But unfortunately, it’s all a fantasy, and eventually the impresario succeeds in harpooning Willie. Unlike the duck in “Peter and the Wolf,” however, Willie doesn’t come back. Sure, the conclusion shows us that he’s in heaven singing in “a hundred voices,” but what consolation is that to a five-year-old? Or to a thirty-five-year-old, for that matter?

If you like this movie enough to rent or purchase it on DVD, you’ll find that the first short, “The Martins and the Coys,” has been completely cut out, and the King’s Men have been deleted from the opening credits. Why? Because as a corporate entity, Disney constantly rewrites its own artistic history. When Melody Time was released for the home video market in 1998, a cigarette dangling from Pecos Bill’s mouth was digitally removed. Also, lyrics in the opening song of Aladdin (1992) were altered under pressure from the American-Arab Anti-Discrimination Committee.

This is nothing new. When Fantasia was re-released in the late ’40s, some incredibly racist caricatures were excised. Were they offensive? Of course. Should Disney be allowed to get away with whitewashing (no pun intended) their own work? I don’t think so.

Why was “The Martins and the Coys” removed, anyway? A common explanation given is that it contains gunplay, but so does “Johnnie Fedora.” Was it because of stereotypes of rural Americans? What about the Italian stereotypes in “The Whale Who Wanted to Sing at the Met”? Or the chauvinistic lyrics in “Casey at the Bat”?

Will some day the wonderful “All the Cats Join In” be removed from prints of this film under pressure from the fat-acceptance crowd, since in one scene a bobby soxer is drawn a little heavy in the hips, leading a boy to shake his head until the pencil and eraser come back in to “fix” her?

At least when Disney released Der Fuehrer’s Face on DVD as part of the Walt Disney Treasures — On the Front Lines collection, they didn’t mess with it. All you have to do is suffer through Leonard Maltin explaining that during wartime, stereotypes were sometimes used and abused. (And you do have to suffer through it every time you watch it. The DVD is programmed so you can’t fast forward past it.) Disclaimers like that are fine with me. Rewriting history is not.