Robert Stevenson’s Dishonored Lady is a classic piece of slickly produced fluff from Hollywood’s Golden Age. It has a little something for everyone; romance, sex, courtroom drama, murder, and psychotherapy.

The stunningly beautiful Austrian actress Hedy Lamarr plays Madeleine Damien, the art editor of Boulevard, a chic Manhattan fashion magazine. Exhausted and unhappy with her life of constant parties, dates in nightclubs, drinking, and meaningless affaires de coeur, she attempts suicide in the most sensible fashion imaginable, by driving her car straight into a tree. Luckily for her, it’s a tree on the front yard of the home of psychiatrist Richard Caleb (Morris Carnovsky), and she’s not seriously injured. Dr. Caleb declares that she has no bones broken, but that she needs the courage to face herself, which she’s unwilling to do. Dr. Caleb drives her to the train station and says, “Miss Damien, you’re an intelligent woman, not an idiot. Can you promise me one thing? When you get ready to throw yourself off Brooklyn Bridge Bridge, will you come and see me first?” He gives her his card and she smiles a little. Maybe there’s hope for her after all.

On Monday morning, however, little seems to have changed. Madeleine arrives at work accompanied by that frenetic orchestral music that’s always used in movies from the ’40s to accompany Manhattan street scenes. She appears to be the only woman on the editorial staff of Boulevard, but she’s no shrinking violet. She refuses to be intimidated after she kills the art layout of one of their most prominent advertiser’s spreads, calling it not art, but “a press agent’s dream.” That night, however, she meets the prominent advertiser, Felix Courtland (John Loder), and accepts a ride home from the tall, gray-haired, mustachioed, dapper, handsome, and very wealthy gentleman. After backpedaling on her decision on the art layout, one of her bitter co-workers, Jack Garet (William Lundigan), tells her exactly what he thinks of her and the way she lives her life. 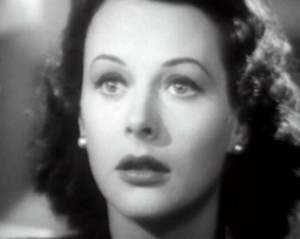 Distraught, she sees Dr. Caleb, and through good old-fashioned talk therapy, realizes how much she hates her life. She was always trying to emulate her father, a successful painter who loved and left more women than he could count. Madeleine adored her father, and thought he was the happiest man in the world. Until he killed himself, that is. Dr. Caleb convinces her to find her true self. She quits her job at Boulevard, gives up her apartment, and moves into a cheap, one-room flat under the name “Madeleine Dixon,” where she pursues her painting.

It just so happens that one of her neighbors is a big handsome lug named David Cousins (Dennis O’Keefe), a pathologist working on a report called “The Effect of Anti-Reticular Serum on Cell Tissue.” He needs some medical illustrations of blood cells done, and Madeleine is just the person. Madeleine and Dr. Cousins fall in love, but she can’t bring herself to admit to him who she really is, and all the details of her past life, even after he proposes marriage.

Her past life comes back to haunt her in the person of Felix Courtland, who finds out where Madeleine is living, and comes a-courting. With David out of town, she unwisely accepts his offer of a night on the town, and becomes embroiled in a murder investigation in which she is the prime suspect.

Will David be able to accept Madeleine after he learns the truth about her and realizes that she’s been lying to him all along? Will Madeleine be able to forgive herself? Or is she heading for a one-way trip to the gas chamber?

Dishonored Lady, which was re-released under the title Sins of Madeleine, is based on the 1930 play Dishonored Lady by Edward Sheldon and Margaret Ayer Barnes. It’s competently made entertainment elevated by Hedy Lamarr’s performance. She’s beautiful to look at, and she strikes a nice balance between wide-eyed vapidity and muted sadness.