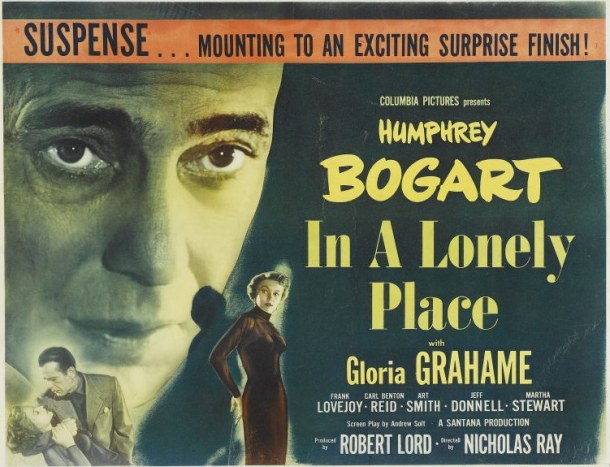 In a Lonely Place (1950)
Directed by Nicholas Ray
Columbia Pictures

SPOILER ALERT. This review will discuss plot points of this film — and the novel it is based on — that you may not want to know if you haven’t already seen the film and read the novel.

This might come as a surprise to people used to films that slavishly adhere to the smallest details of the novels and comic books they’re adapted from (lest the filmmakers incur the wrath of throngs of nerds on the internet), but movies based on books used to be wildly different from their source material.

The phrase “the book was better” became a cliché for a lot of reasons, but one reason is that during the era of the Hays Code, novels could be much more explicit about sexuality, violence, race, gender, and other “grown-up” issues than Hollywood films could be.

There was probably no way Dorothy B. Hughes’s 1947 novel In a Lonely Place — which is about a man who stalks, rapes, and murders a series of women in postwar Los Angeles — was ever going to make it to the screen with its original plot intact. What’s interesting about Nicholas Ray’s film adaptation, however, is that it fundamentally changes the story while retaining the novel’s exploration of toxic masculinity. 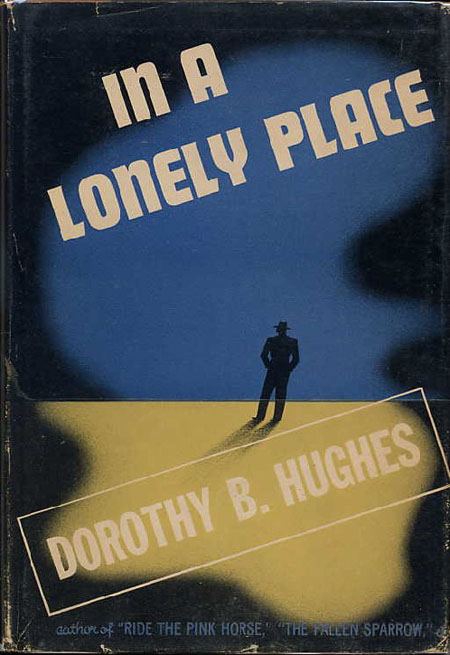 Hughes’s novel is a third-person narrative that never leaves the perspective of Dixon Steele, a World War II veteran who is pretending to write a novel while receiving financial support from a rich uncle.

Dixon — “Dix” to his friends — sponges off a wealthy friend from college, Mel Terriss, who never appears in the novel and is supposedly out of the country. Dix lives in Mel’s apartment, wears his clothes, and charges purchases to his expense account.

One of Dix’s friends from his days in the service, Brub Nicolai, is now an LAPD detective investigating the murders that Dix is committing. Under the guise of “research,” Dix insinuates himself into Brub’s life and into Brub’s investigation. Dix was a pilot in the war, and he became addicted to the thrill of danger when flying missions. When he rides along with the police and returns to the scenes of his crimes, he learns what they know and what they don’t know, and he experiences rushes of adrenaline by pushing his luck. 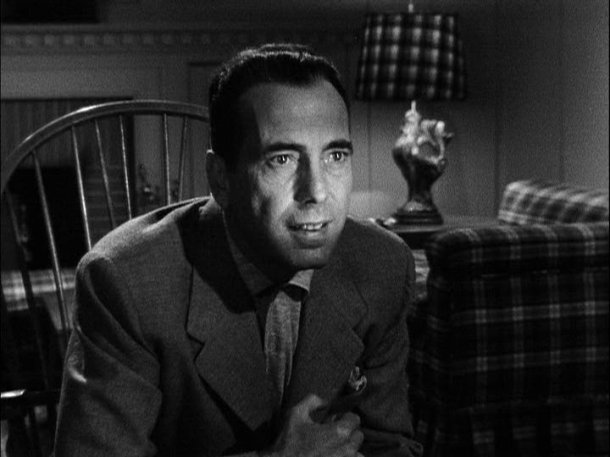 Andrew Solt’s screenplay, from an adaptation by Edmund H. North, retains most of the characters’ original names, but nearly everything else is different in some way. Instead of pretending to write a mystery novel as a cover, in the film version Dixon Steele is a successful screenwriter; or at least he used to be. Instead of being outwardly “normal” and utterly average-looking, the film’s Dix is distinctive-looking, well-known around Los Angeles, and has a police record for violence. Instead of a string of murders, Dixon is suspected of only one; the murder of a checkroom girl he took home one night to help him with a screenplay.

If the producers had been casting for a straight adaptation of the book, I think the perfect choice for Dixon Steele would have been Robert Montgomery, who starred in another adaptation of a novel by Dorothy B. Hughes, Ride the Pink Horse (1947). Montgomery was the kind of guy who would be hard to pick out of a police line-up, but he had intense and haunted eyes. He also served in combat in World War II, just like Dixon Steele.

Bogart, on the other hand, is always “Bogie” no matter who he is playing. I don’t mean that he was ever typecast, just that his unique image and his star power were always bigger than the character, at least in the post-Casablanca era. This works for the film version of In a Lonely Place, since Dix is recognized all over Hollywood, mostly by people who dislike him. 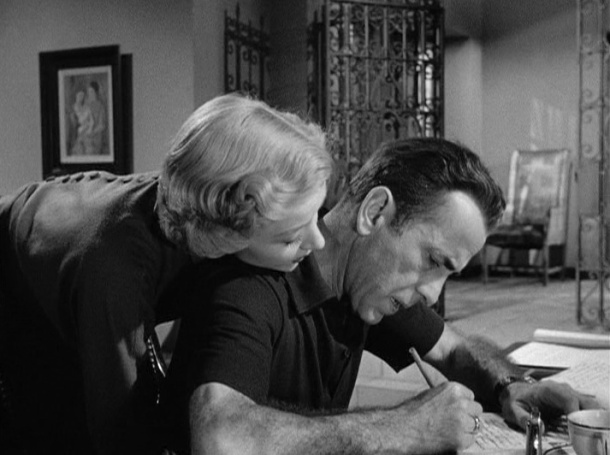 In a Lonely Place is a masterful film from Nicholas Ray, a director who had already made a handful of impressive films in a relatively short career. The changes made to Hughes’s novel all work in the context of the film, since it’s not a film about a murderer, it’s a film about an angry and deeply unhappy man who is unable to control his rage.

In a Lonely Place works on two levels. If you go into it without knowing the ending, you’ll probably spend most of the film trying to guess whether or not Dix is guilty of murder. Bogart’s performance is perfect in this regard. His line “I’ve killed dozens of people … in pictures” rivals Bela Lugosi’s famous line from Dracula (1931), “I never drink … wine.”

Solt’s screenplay originally ended with Dixon — who is innocent of the murder he’s suspected of — strangling his girlfriend, Laurel Gray (Gloria Grahame). This is a trite conclusion that implies that police railroading “made him do it,” and it’s good that Ray shot a different ending.

What we’re left with is something much more profound. Unlike most Hollywood films, the love of a good woman doesn’t reform Dixon Steele. His rage and his refusal to confront his own propensity for violence drives her away. He is unwilling to confront his own demons, and it damns him to a lifetime alone. 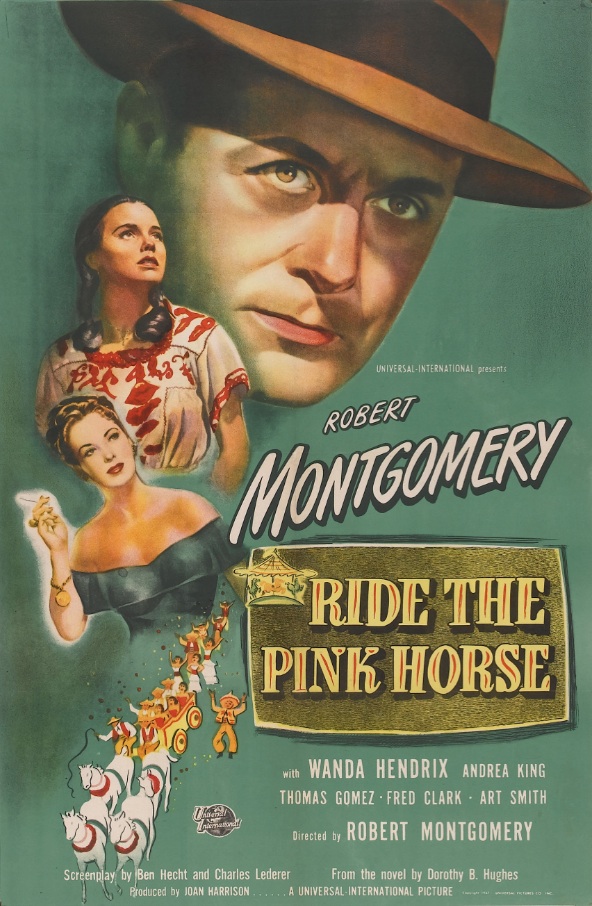 Robert Montgomery directed and starred in two movies released in 1947. The first, Lady in the Lake, was an interesting stylistic experiment — an adaptation of Raymond Chandler’s novel that was filmed entirely from private eye Philip Marlowe’s point of view. The second, Ride the Pink Horse, is more traditionally lensed. It’s based on a novel by Dorothy B. Hughes, with a screenplay by Charles Lederer and Ben Hecht. It’s also the better of the two films, so naturally it’s the one that isn’t available on DVD.

Besides being a more satisfying and involving film, Ride the Pink Horse also lets Montgomery flex his acting chops. In Lady in the Lake, since we only see what he’s seeing, all we hear is his voice, and his performance is somewhat listless.

The character Montgomery plays in Ride the Pink Horse — Lucky Gagin — is a noir archetype; the returning veteran of World War II. But unlike baroque, oneiric noirs like Somewhere in the Night (1946), in which a veteran suffers amnesia, brainwashing, or any number of high-concept emotional injuries, Montgomery’s character in Ride the Pink Horse is believable as a returning combat veteran. Lucky Gagin is a bitter, tight-lipped man whom violence hangs over like a dark cloud. As soon as he steps off a Greyhound bus in the little town of San Pablo, New Mexico, we can read in his face miles of hard road, lost friends, and random death.

Lucky Gagin is obviously a less intelligent person than the man who plays him, and I wasn’t always convinced that Gagin was as dumb as some of his words and actions, but Montgomery’s performance is mostly believable. His pain-wracked sneer is especially easy to buy, which is good, since Gagin spends half the film clinging to life, bleeding out from a knife wound. 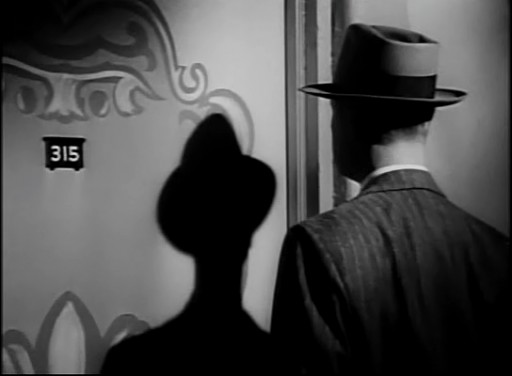 Gagin is in New Mexico to blackmail racketeer and war profiteer Frank Hugo (Frank Clark) with a canceled check that proves Hugo’s involvement in criminal enterprise. Hugo ridicules Gagin for asking for a paltry amount. Nevertheless, there’s the sense hanging over the film that whether Gagin asks for one dollar or a million, he’ll never get it.

In one of those little touches that I love, Hugo wears a hearing aid, and he often has to move the receiver clipped to his shirt into a better position to hear what’s going on. It’s never played for laughs, but it humanizes him, which makes his power and malevolence all the more believable.

Like a lot of thrillers, Ride the Pink Horse is replete with characters whose motivations are vague and mysterious. The most mysterious of all is the Mexican-American Indian girl Pila (Wanda Hendrix), who develops an unnatural attachment to Gagin as soon as he steps off the bus. She foresees his death, and gives him a little doll to carry that she says will protect him. She also follows him around for the entire picture, despite the fact that he’s constantly mean to her. Long braids and brownface notwithstanding, Hendrix isn’t very believable as an American aboriginal, but she’s nice to look at, which makes up for a lot. 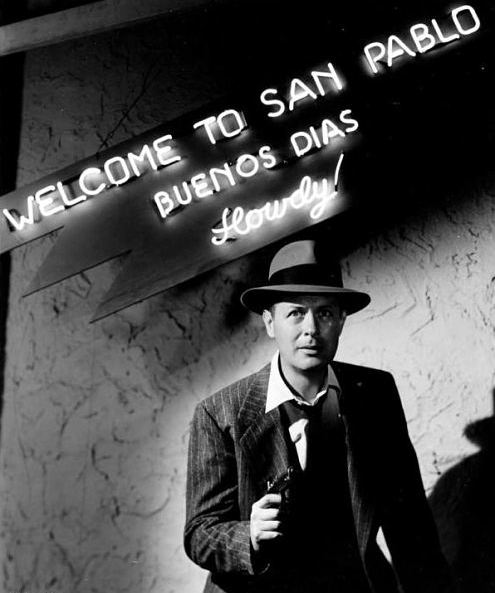 The other angels who come into Gagin’s life — and who might be able to help him if he could only get over his distrust of everyone — are an elderly G-man named Bill Retz (Art Smith), who wants Gagin to help him bring in Hugo using legal means, and a chubby, good-natured Mexican named Pancho (Thomas Gomez), who runs a carousel, and who gives Gagin a place to sleep.

It’s Pancho’s carousel that gives the picture its title, but if there’s a deeper meaning to the pink merry-go-round horse, I couldn’t suss it out. Does it symbolize death? Life? Everything? Nothing? Your guess is as good as mine.

Ride the Pink Horse is a crisp, well-made thriller. It’s not quite an all-time classic, but it’s worth a look, especially if you’re a noir aficionado, and it’s well deserving of a proper DVD release.