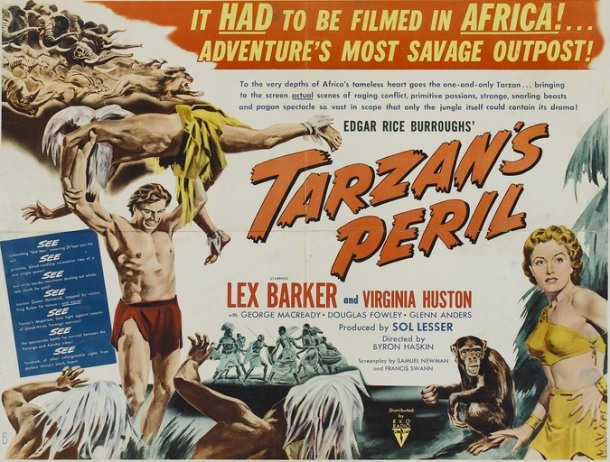 The lavish spectacle King Solomon’s Mines (1950) rewrote the rules of the “jungle adventure” film, since it was shot on location in Sub-Saharan Africa and instantly made all the B movies shot on soundstages and backlots look ridiculous. First and foremost, it showed that there was a lot less jungle in Africa than kids raised on Tarzan movies assumed there was. The distant, rolling plains we saw in King Solomon’s Mines bore little resemblance to the dense jungles where Tarzan swung on vines.

So producer Sol Lesser and RKO Radio Pictures picked up the gauntlet and decided to shoot their next Tarzan picture not only in color, but on location in Kenya.

Unfortunately, something went wrong with the color footage, so Tarzan’s Peril was released in black & white. A fair amount of the location footage found its way into the final product, but it’s not integrated very well into the main narrative. We never see Lex Barker strutting in his loincloth through the grasslands of Kenya, for instance. He mostly sticks to the soundstages and backlots, clowning around with Cheetah the chimpanzee and throwing knives at not-very-terrifying giant snake puppets.

As I said in my review of Lex Barker’s previous Tarzan picture, Tarzan and the Slave Girl (1950), Barker’s movies are probably only ever going to be watched by hardcore Tarzan fans. With nearly a century of Tarzan flicks to choose from, newcomers are advised to start with the Johnny Weissmuller movies, particularly the first two, Tarzan the Ape Man (1932) and Tarzan and His Mate (1934). If you have kids and don’t want to expose them to the dated and racist depictions of Africans in the early Weissmuller films, you’ll probably want to show them either Disney’s Tarzan (1999) or Greystoke: The Legend of Tarzan (1984) (which, incidentally, was the first Tarzan movie I ever saw).

However, if you’re not a hardcore Tarzan fan, there is one reason to check out Tarzan’s Peril. It features Dorothy Dandridge as “Melmendi, Queen of the Ashuba.” Dandridge was the first African-American to be nominated for an Academy Award for best actress, and along with Lena Horne, she was one of the only black “leading ladies” in Hollywood in the ’40s and ’50s. Of course, even for a beautiful and light-skinned actress like Dandridge, good roles for black women were still hard to come by in the ’50s. And the roles she was offered, like this one, are fairly limited. 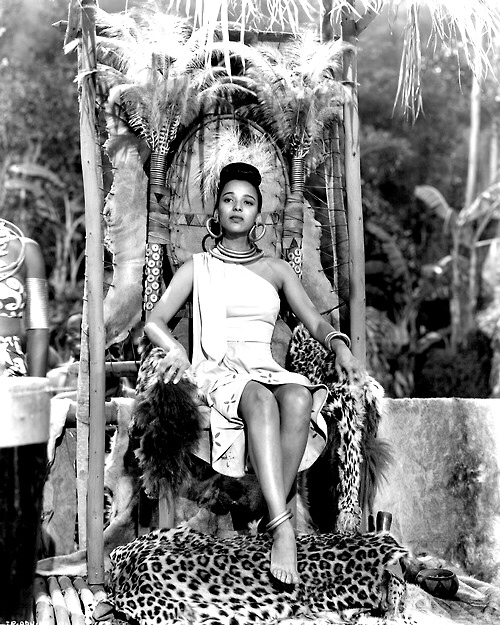 The problem is not just that Tarzan’s Peril is a low-budget picture (I love B movies, and this is a perfectly decent one with plenty of action), it’s that Dandridge is given frustratingly little to do. In fact, after watching Tarzan’s Peril I wished that Jane hadn’t even been featured as a character. She’s played by Virginia Huston, and except for a bit of mutual splashing around in the water, there’s no erotic chemistry between her and Barker. Mostly she comes off as an idealized version of a prim 1950s housewife, chastising Tarzan for eating food out of a pot on the stove and demanding he sit down to dinner.

Tarzan’s Peril is OK, but not great. On the plus side, it’s got plenty of action, some of the best location footage in an RKO Tarzan movie to date, and a trio of memorable villains.