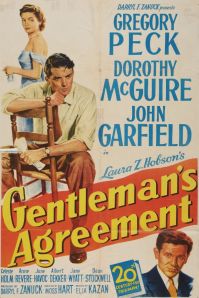 It was also incredibly popular, and was the eighth highest grossing film of the year, earning more than $4 million at the box office.

This was a remarkable feat for a sober black and white drama about anti-Semitism, especially considering that most of the ten highest grossing films of 1947 were either comedies or Technicolor spectacles.

Before embarking on this project, I’d never had much desire to see Gentleman’s Agreement, despite my love of Kazan’s other films. It has a reputation for being heavy-handed, and I dislike movies with good intentions that spoon-feed the audience a simplistic message.

So I was really happy to discover that Gentleman’s Agreement is a much more subtle and thought-provoking film than its reputation suggests. It’s a little dry in stretches, but it wasn’t nearly as preachy as I was expecting. 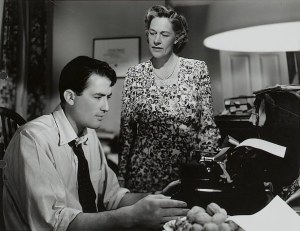 In fact, it’s still a unique movie because it addresses not active, virulent anti-Semitism but the silent majority that allows prejudice to flourish. In other words, if there are ten people at a table and one person tells a nasty joke about Jews and the other nine people either chuckle politely or feel offended but don’t say anything, the problem is not the one anti-Semite, but the other nine people.

Most movies made after Gentleman’s Agreement still focus on active, violent hatred, which lets the audience off the hook to some degree. Someone can watch Mississippi Burning (1988) and come away with the feeling that they’re not a racist, because they’d never burn a cross in a black family’s yard or participate in a lynching.

Gentleman’s Agreement, on the other hand, never really lets the audience off the hook, and now that I’ve seen it, I suspect that part of its reputation for preachiness comes from the discomfort it causes.

For instance, there’s a great scene in which writer Phil Green (Gregory Peck), who is pretending to be Jewish in order to write an exposé on anti-Semitism, tries to get a hotel manager to tell him if the hotel is restricted. The manager refuses to answer the question, but still steers Green out of the hotel, saying things like “Maybe you would be more comfortable in another establishment.” The viewer expects Green to get somewhere and it’s incredibly frustrating when he doesn’t. Eventually he leaves and all the people in the lobby watch him go. Probably many of them feel bad about what’s happening, but no one speaks up. It’s a maddening, intensely uncomfortable scene, and begs the question, “What would you do if no one else was speaking up?” 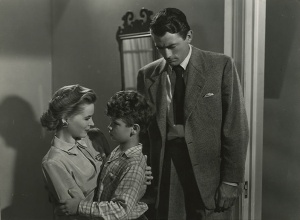 Another scene that really stuck with me was the one in which Green’s son Tommy (Dean Stockwell) comes home crying after a group of boys call him a “stinking kike” and “dirty yid.” Green’s fiancée Kathy (Dorothy McGuire) is upset, as anyone would be, but she comforts Tommy by hugging him and telling him that it’s all a mistake, and he isn’t really Jewish.

This causes Green to fly into a rage, and he lectures Kathy that her attitude is what allows prejudice to flourish unchecked.

I think that Gregory Peck’s humorless performance and holier-than-thou attitude is what turns off some viewers, but I couldn’t find fault in the logic of anything he says in the film.

His relationship with his secretary Elaine (June Havoc) is particularly interesting, since she’s Jewish but pretends not to be. Early in the film, when she still believes Green is Jewish, she expresses dismay that the magazine they work for is courting Jewish applicants. She tells Green, “Just let them get one wrong one in here and it’ll come out of us. It’s no fun being the fall guy for the kikey ones.”

Green’s childhood friend Dave Goldman (John Garfield) tells him that he’s having such strong reactions to anti-Semitism because he’s experiencing it all at once. Dave grew up experiencing subtle prejudice, so he’s learned to filter a lot of it out. There’s something else, however, that I think is unspoken in the film, which is that Green is experiencing the passion of the newly converted.

He may not have converted to Judaism, but he’s committed to his subterfuge, and takes all the slings and arrows of anti-Semitism intensely personally.

Apparently many Hollywood studio heads, most of whom were Jewish, didn’t want Darryl F. Zanuck (who wasn’t Jewish) to make Gentleman’s Agreement. They feared that it would stir up trouble, and that directly confronting anti-Semitism would only make things worse.

One of the big themes of Gentleman’s Agreement is how wrong-headed this notion is, and that failing to confront things is never the right move.

It’s a really good movie, and not just because its philosophy is “politically correct.” The actors all play their parts perfectly, and it’s a really well-made film about people, and how people relate to each other. Most of the “big ideas” in the film are expressed the way they are in real life — by people who have opinions.

Robert Siodmak’s The Spiral Staircase was made in 1945, and released into some theaters in December. The earliest confirmed day of release I could find, however, was February 6, 1946, in New York City, so I’m reviewing it here.

Based on Ethel Lina White’s 1933 novel Some Must Watch, The Spiral Staircase is a slick, good-looking thriller with some striking visual choices. White’s novel took place in contemporary England, but the film is set in early 20th century Massachusetts. Some sources I’ve found claim it takes place circa 1916, but the silent film an audience in a movie house is watching in the first scene of the film is D.W. Griffith’s 1912 short The Sands of Dee, and one of the characters has just returned from Paris, about which he waxes rhapsodic, speaking wistfully of all the beautiful women. So it seems to me that the action of the film must take place before the First World War.

The Spiral Staircase doesn’t take long to deliver its terrifying goods. In one of the rooms above the silent movie house, we see a young woman (Myrna Dell) getting undressed. She walks with a slight limp. When the camera moves into her closet as she hangs up her dress, there is a pause, then the camera moves into the thicket of hanging clothes. They part slightly, and suddenly we see an enormous, maniacal eye fill the screen. We then see the girl reflected in the eye, her lower half blurred (why this is will be explained later).

Alfred Hitchcock used a closeup of Anthony Perkin’s eye to great effect in Psycho (1960). And one of the earliest indelible images in the history of cinema was an eyeball being slit open by a straight razor in Luis Buñuel’s short film Un chien andalou (1929). But a close shot of an eye used in the same way as a violin stab on the soundtrack, or a shadow quickly passing across the frame, to make the audience jump out of their seats, is relatively rare. I thought Bob Clark’s Black Christmas (1974) was the first film to do this — when the killer is shockingly revealed as an eyeball peering out from between an open door and a door jamb — but apparently it wasn’t.

Among the patrons of the movie house, none of whom is questioned by the incompetent local constable (James Bell) after the murder, is a mute woman named Helen Capel (Dorothy McGuire). Her friend, the handsome young Dr. Parry (Kent Smith), gives her a ride home, and tells her that he believes her muteness can be overcome. She silently demurs, and goes home to the creepy old mansion where she is employed as a servant to the bedridden but mentally sharp Mrs. Warren (Ethel Barrymore). Also present in the house are the other domestics, Mr. and Mrs. Oates (Rhys Williams and Elsa Lanchester, who looks a lot frumpier than when she played The Bride of Frankenstein in 1935), Mrs. Warren’s two stepsons, Prof. Albert Warren (George Brent) and ne’er-do-well Steve Warren (Gordon Oliver), the professor’s pretty assistant Blanche (Rhonda Fleming), and Mrs. Warren’s crotchety old nurse (Sarah Allgood).

Once the action settles down and focuses on the Warren estate, The Spiral Staircase becomes a more predictable game of whodunnit, as well as a frustrating game of “when will she find the strength to scream for help, already?”

The film is never boring, however, due in no small part to the brilliant cinematography of Nicholas Musuraca. The Spiral Staircase is all shadows and gaslight, which — along with one of the longest thunderstorms on film — hearkens back to spooky haunted house pictures like James Whale’s The Old Dark House (1932).

The Spiral Staircase is not quite a masterpiece, and it never aspires to be more than a pulse-quickening thriller, but it is exceptionally well-made entertainment.