In 1947, March was “make jokes about Nora Prentiss” month on the Jack Benny show. A week didn’t go by with at least one line like, “She makes Nora Prentiss look talkative.”

I suppose the promotional tagline for the film — “Would you keep your mouth shut if you were Nora Prentiss?” — was irresistible for comedians, especially since it’s selling the picture based on its final 10 minutes, which strain credulity a bit.

If you can swallow a few plot contrivances, however, Nora Prentiss is a fantastic film. The performances are great, Vincent Sherman’s direction is assured, Franz Waxman’s score is rich and expressive, and James Wong Howe’s black and white cinematography is crisp and beautiful, as it always was.

The title, poster, and advertising campaign for Nora Prentiss all seem to be modeled on the earlier Warner Bros. “women’s noir” Mildred Pierce (1945), but they’re very different films. Nora Prentiss, which is based on Paul Webster’s short story, “The Man Who Died Twice,” is more about its male protagonist, Dr. Richard Talbot (Kent Smith), than it is about Nora.

The film begins, as so many noirs do, at the end. A man sits in the shadows of a prison cell and refuses to say how he knew Dr. Talbot, or why he was blackmailing him.

Dr. Talbot is a 43-year-old physician with a wife (Rosemary DeCamp) and two teenaged children (Robert Arthur and Wanda Hendrix). He lives in a beautiful house in San Francisco and shares a thriving practice with his partner, Dr. Joel Merriam (Bruce Bennett). 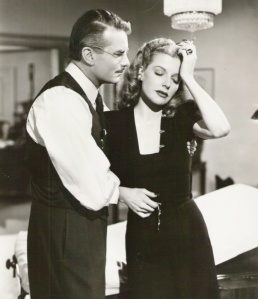 One night, Talbot comes to the aid of a beautiful nightclub singer after she’s knocked down by a car and suffers minor leg injuries. The singer, Nora Prentiss (Ann Sheridan), flirts with him a little as he tends to her, her nylon rolled down on one leg.

The strait-laced Talbot is completely smitten with Nora, but when she finds out he’s married, she resists his clumsy advances. Talbot says he doesn’t see a reason why they can’t be friends, but an afternoon at his cabin in the mountains never seems platonic, no matter what either of them says.

Nora is drawn to Talbot, but she never seems less than clear-headed about the affair. After a short, dreamy period of time with Talbot, she realizes that she doesn’t want to be “the other woman,” and attempts to break it off. He is less clear-headed, and will do anything to be with her, including — but not limited to — promising her he will divorce his wife, using a cadaver to fake his own death, and following her to New York, traveling under an assumed name.

If the logic police tend to kick down your doors of perception anytime the party in your head gets too weird, you’ll probably find yourself picking apart the plot of Nora Prentiss starting around the halfway mark.

But if you can relax, sit bank, and enjoy the ride, Nora Prentiss is an absorbing film about a man who loses everything for the love of a woman, eventually devolving into a paranoid, hard-drinking wreck who never leaves his hotel room for fear he will be recognized.

Kent Smith is very good as Talbot, but the film works as well as it does because of Ann Sheridan’s performance as Nora. Unlike noirs in which a wicked femme fatale with no discernible inner life seduces and ensnares a sad sack Everyman, Sheridan’s Nora is a three-dimensional character. She’s beautiful, intelligent, and sensible enough to pull away from Talbot when things start to go south. This has the effect of making Talbot’s obsession sadder and more believable than it would be if she were just a harpy with a beautiful face.