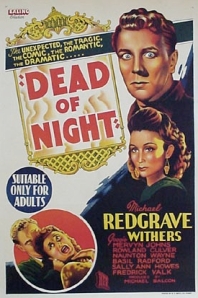 Dead of Night is a British anthology of horror stories with many layers and a cyclical story structure. The five segments are based on stories by H.G. Wells, E.F. Benson, John Baines, and Angus MacPhail. Each is great, but the way the stories are told and the way they are linked together is the most interesting thing about the film.

When Dead of Night begins, an architect named Walter Craig (Mervyn Johns) is driven to an English country estate, where he has been hired for a reconstruction project. Once he arrives, and is introduced to the group of people in the living room, he experiences déjà vu. He claims to have dreamed the room and the people in it many times. He is able to predict certain things before they happen in the narrative. A psychiatrist named Dr. Van Straaten (Frederick Valk) refuses to believe any of it, but Craig claims that he is being treated by the doctor, and works hard to dispel the doctor’s doubts. In between the stories that people tell, Craig presages disaster. Horrific events will come to pass, he keeps telling his fellow house guests.

Antony Baird tells the first tale. His character is a race car driver named Hugh Grainger who survives a smash-up on the track, but soon after has disturbing visions of a hearse driver who appears in different guises, but always at a quarter after four, and always speaking the words, “Just room for one inside, sir.” This story provides the template that was followed by every Final Destination film, and it does so in less than seven minutes.

The second story is about a young woman named Sally O’Hara (Sally Ann Howes) who attends a Christmas party. While playing hide-and-seek with the other young people, she is found by a young man who hides with her, and claims that there was a murder committed in the house in 1860 by a mad young woman. Going off on her own, she discovers a passage into a child’s bedroom, where a little boy sits, weeping. He tells her about his older sister. She puts him to bed and sings to him. When she rejoins the party, she learns that the name the little boy gave her was the name of the boy who was murdered by his sister.

In the third story, a woman named Joan Cortland (Googie Withers) recalls buying a birthday present for her fiancé, Peter Cortland (Ralph Michael), a large mirror. He starts seeing strange things in the mirror, such as a room completely different from the one in which he is standing. Increasingly disturbed by her husband’s claims and his strange behavior, Mrs. Cortland tracks down the history of the mirror, and learns that its former owner was a wealthy gentleman who groundlessly accused his wife of infidelity. He murdered his wife, and then sat down in front of the mirror and cut his own throat. Will history repeat itself?

In the fourth story, the owner of the house, and the host of the party, Eliot Foley (Roland Culver), tells a comical ghost story about his two good friends, George Parratt (Basil Radford) and Larry Potter (Naunton Wayne), who were both avid golfers. Bitter rivals on the links, they were the best of friends at all other times, until they both fell in love with the same woman, Mary Lee (Peggy Bryan). They decide to settle things with an unfriendly game of golf. When the game is finished, one of them quite unexpectedly walks into a lake and drowns himself. The winner marries Mary, but is haunted by the voice of his late friend, destroying his golf game for good. (Radford and Wayne played comically sport-obsessed British gentleman in a number of films, including Alfred Hitchcock’s 1938 film The Lady Vanishes. Their alliterative pair of names changed from picture to picture, but the schtick was the same.)

In the final story, Dr. Van Straaten tells his own tale. He was once called to examine a ventriloquist named Maxwell Frere (Michael Redgrave) who was accused of the attempted murder of an American ventriloquist, Sylvester Kee (Hartley Power). Frere’s dummy, Hugo, seemed to have a mind of its own, and threatened to leave Frere for a new owner, Kee. Dummies in horror movies had been done before, (e.g., The Unholy Three), but Dead of Night created a template that many films have used since.

Dead of Night was released on September 4, 1945 in London, and a little less than a year later in the United States, on June 28, 1946, in an edited version. Apparently the U.S. distributors felt that the film’s running time (103 minutes) was too long, so they cut out the golfing story and the Christmas ghost story, leaving only three stories. I can’t imagine seeing this film without them. The structure of the film is deliberate, and all the segments are tied together in a brilliant and surreal climax.