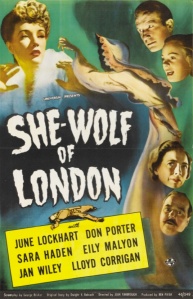 Jean Yarbrough’s She-Wolf of London is a passable way to while away an hour after the A feature has run its course, but that’s about it. By the mid-’40s, Universal’s horror department was looking pretty moribund. The last truly outstanding horror film Universal Pictures released was probably The Wolf Man (1941). After that, there were several Mummy, Dracula, and Invisible Man sequels and spin-offs, as well as a couple of everything-but-the-kitchen-sink monster mashes, House of Frankenstein (1944) and House of Dracula (1945). Most of them were fine, campy entertainment, but none of them approached the truly outstanding horror pictures that Universal produced in the ’30s.

This picture is similar in many ways to Devil Bat’s Daughter (1946), which I watched a few weeks ago. (Incidentally, Jean Yarbrough, who directed She-Wolf of London, also directed the original The Devil Bat in 1940.) Like Devil Bat’s Daughter, She-Wolf of London is a horror film with every last drop of the supernatural squeezed out of it. Sure, there are a few teases here and there, and the foggy atmosphere is thick, but as soon as a young girl in a film who’s set to inherit a fortune starts to think she’s crazy, five’ll get you 10 she’s being manipulated by someone.

She-Wolf of London takes place in turn-of-the-century London. The Allenby Curse has almost been forgotten, but this is a Universal horror picture, so it’s all set to rear its ugly head again. (The curse has something to do with members of the Allenby family assuming the form of wolves, but the film is vague about the details.) Phyllis Allenby (played by June Lockhart, who is best known to legions of baby boomers as the mom on two classic TV series, Lassie and Lost in Space) is a young woman who just wants to marry her sweetheart, Barry Lanfield (Don Porter). When a series of brutal murders committed by a woman wearing a cloak and hood occur in a nearby park, Phyllis fears she is killing people at night and forgetting everything when she wakes up in the morning. All the evidence of cinematic lycanthropy is there — the muddy footprints leading back to the bed, the blood on the hands — but, as I said, she’s an heiress on the verge of inheriting a vast fortune, so you can bet she’s being gaslighted.

Even for what it is, She-Wolf of London is stunningly predictable, right down to its easy-to-spot red herrings. It’s notable only for taking a relatively serious approach to its material long after most of the studio’s horror films were pure camp. But that, in itself, is another problem. As an exploration of the psychosexual motivations that might drive a murderess, the picture falls completely flat. Cat People (1942) this film is not.