I vitelloni, Federico Fellini’s semi-autobiographical film about a group of ne’er-do-well young men living in a small seaside town, was the only film nominated at the 30th Academy Awards that had originally been released several years earlier. I’m not sure why it was nominated, exactly, since it premiered in 1953, was released in the United States in 1956, and Fellini’s then current film, Nights of Cabiria (1957), was also nominated (and won) the Academy Award for Best Foreign Film.

Fellini was definitely having a “moment” at this point. His film La Strada (1954) had won the Academy Award for Best Foreign Film the year before at the 29th Academy Awards.

It’s easy to see why Fellini was hot shit in the mid-1950s. La Strada is a beautiful grand tragedy, and I vitelloni is equally beautiful while being much more fun and light-hearted.

The group of five protagonists are, like the protagonist of Fight Club, “30-year-old boys.” They have vague dreams and talk about leaving their small town but never do. They drink, harass women, and avoid responsibility. One of them sings opera, one of them writes plays, and one of them is forced to work and doesn’t exactly excel at it. Most of them experiment with growing facial hair like college students. The film spends more time with certain of them than others, like Fausto (played by Franco Fabrizi), the unofficial leader of the group who marries the girl he got pregnant but constantly tries to seduce other women, several times crossing the line into sexual assault.

The bad sides of these men are constantly on display, which is frustrating, but it’s tempered by how funny their irresponsible idiocy often is. Fellini perfectly captures the rhythms of a seaside town where it’s cold half the year and things only happen a couple of times every year when there’s a festival. These grand bacchanals end in still-drunk hangovers the next morning as the sun rises. The rest of the time the main characters prowl the streets, fight with their parents, and get into trouble entirely of their own making.

I had insomnia and watched this between 3 and 5 in the morning. I put it on because I thought it might help me drift off, but instead it drew me into its world and kept me awake. There’s no manufactured tension or hidden secrets waiting to be revealed. I vitelloni is involving in the best possible way. It presents a completely real world populated with completely real characters, all with an overwhelming aura of melancholy.

Roma, Città Aperta is one of the most famous examples of Italian neorealist cinema, and is better known than Paisà, but I think that Paisà stands head and shoulders above Roma, Città Aperta as an artistic achievement. It’s a sprawling, chaotic picture of life in Italy during the last days of World War II. The title of the film comes from the word that American soldiers called Italians — “paisan,” or “buddy” — and over the course of six vignettes the film explores a variety of Italian characters’ attempts to communicate with and understand their occupiers.

Rod Geiger, the American G.I. who carried Roma, Città Aperta back to the United States, worked closely with Rossellini on Paisà, and is listed in the credits as a producer. Most of the Americans in the film were played by off-Broadway actors cast by Geiger’s father, who ran a theater in New York. Depictions of foreigners and foreign cultures in movies are tricky to get right. Usually there are at least a few things that just don’t ring true, but there were times while I was watching Paisà that I forgot that I was watching a “foreign” film featuring American characters. The American actors play their parts in a naturalistic, unaffected fashion, and their dialogue often seem ad-libbed. There are even aspects of the film that ring more true than anything coming out of Hollywood at the time, like an extremely drunk African-American soldier (played by Dots Johnson) who is full of anger and resentment.

Many writers contributed to the film, including Klaus Mann (the son of Thomas Mann), who wrote a treatment. A few of the six episodes that comprise the film function as parables, and have endings that border on being trite, but the overall effect of Paisà is an overwhelming panorama of violence, yearning, friendship, misunderstanding, and horror.

The film is a journey from the south of Italy to the north, and the segments take place in Sicily, Naples, Rome, Florence, a monastery in the Apennine mountains, and in a partison hideout in Porto Tolle. Unlike the American characters, the Italians mostly play themselves. The Sicilians are all played by Sicilian non-actors. The partisans in Porto Tolle are played by real partisans. A street urchin in Naples named Pasquale is played by a real street urchin named Alfonsino Pasca. The monks in the Apennines were really monks, but they were dubbed by different actors, since their accents would have made it clear that they were from the south of Naples, not to the north.

Most of the segments of Paisà end tragically, with characters the audience has grown to care about killed in combat. The deaths are senseless and sudden, and the feeling that no one is safe makes Paisà one of the most affecting and least cliched war films I’ve ever seen. 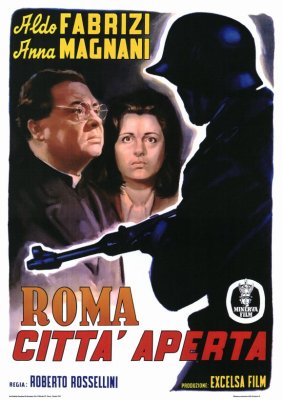 Roberto Rossellini’s Roma, Città Aperta (Rome, Open City) premiered in Italy on September 27, 1945, and premiered in New York City on February 25, 1946, at the World Theatre on 49th Street, a 300-seat theater where it would continue to play for nearly two years. It was shown at Cannes in September 1946 and won the festival’s grand prize. It also received the New York Film Critics Circle award for best foreign film of 1946. It’s cited as one of the earliest masterpieces of the Italian neorealism movement, and has been generally accepted as a great film since its release. The problem with instant masterpieces is that sometimes they coast for decades on reputations that might not be fully deserved.

Does Roma, Città Aperta fall into this category? Yes and no. The cartoonish villains and black and white morality sometimes skirt the edge of the ridiculous, and the Italian population is painted as victims of the Nazis to such a large degree that a person who saw this film in a vacuum would be forgiven for thinking that Italy was an occupied Allied power. Also, the exteriors are shot in a verité style that sometimes clashes with the more traditional interior shots. For example, a sun-drenched, slightly overexposed street scene with genuinely angry-looking extras might be followed by a carefully lighted interior scene featuring a stereotypically mincing Nazi officer and his right-hand dyke. For the most part, however, Roma, Città Aperta holds up as a suspenseful, well-crafted wartime espionage yarn that inspires and uplifts, even though … spoiler alert … all the good guys die.

Roma, Città Aperta arrived at just the right time for a positive reception. While Mussolini’s Italy was an Axis power, the country had been completely dependent on Germany since the end of 1941. Rome was occupied by the German army, with help from the Mussolini’s fascist blackshirts, but Italy has never been the most organized or politically unified country, and plenty of Rome’s citizens were understandably restive during this time. Roma, Città Aperta is a story of resistance that takes toward the end of the German occupation of Rome. Rossellini began working on the script with Federico Fellini and Sergio Amidei in August 1944, two months after the Allies had forced the Germans out of Rome, and he began shooting the picture about five months later. The picture’s politics (staunch Communist and anti-Fascist) were also perfectly suited to receive a warm reception from audiences immediately following World War II. If it had been shown in America and Britain just a few years later, the picture’s cheerleading for Communist principles would doubtlessly have gone over less well.

The new DVD from the Criterion Collection I watched looks great. It’s the full version, too, with the blowtorch torture sequence in its entirety, and while the subtitles are merely adequate, they do appear for each line of dialogue (a complaint about one available DVD version I’ve seen is that whole sections of conversation weren’t translated). Even the snatches of conversation in German are subtitled, which seemed unnecessary, since the main baddie, Maj. Bergmann, speaks Italian most of the time. (He’s played by the Austrian actor Harry Feist, who lived in Italy most of his adult life.) Visually, the film captured my interest immediately. The sequence in which resistance member Giorgio Manfredi (Marcello Pagliero) eludes the Gestapo by fleeing along the rooftops is thrilling. The human drama took a little longer to jell for me, partly because there are a lot of characters, and since this is a neorealist picture, they don’t appear at the beginning with title cards explaining their relationships. Aldo Fabrizi gets top billing. He plays the priest, Don Pietro Pellegrini, who ties all the characters together. He transmits messages, cash, and weapons for the resistance. Giorgio’s friend Francesco (Francesco Grandjacquet) is a fellow member of the resistance, but seems less dedicated to the cause than Giorgio. Giorgio’s girlfriend, Marina (Maria Michi), works at a nightclub and doesn’t seem to understand the gravity of Giorgio’s situation. Francesco’s fiancée Pina (Anna Magnani) shelters Giorgio and cares for her young son Marcello (Vito Annicchiarico), who gets involved with his own resistance against the Nazis, a sort of children’s crusade that involves blowing shit up really good.

As I said, it’s the cartoonish villains that seem most silly six decades later. Maj. Bergmann is as prissy and effeminate as he is cruel, which would be easier to ignore if he weren’t paired with an evil lesbian named Ingrid (Giovanna Galletti). The scenes in which Ingrid cajoles the easily manipulated Marina are like something out of a ’60s James Bond film.

There’s an oft-repeated story that Roma, Città Aperta was an ad hoc production, and that it was shot on scraps of discarded film, which gave it its distinctive choppy look. According to David Forgacs’s recent book on the film for the British Film Institute, however, when the Cineteca Nazionale restored the film in 1995, they found that the original negative consisted of just three types of film; one for the exteriors and two different, more sensitive, types of film for the interiors. The inconsistencies and changes in brightness are now blamed on poor processing. It’s an alluring legend, though; Rossellini and his crew shooting in a beautiful, ancient city still damaged by war, picking film up out of the gutters, but it’s just that … a legend. There’s another great story about the film, also of questionable veracity. According to Fellini’s essay “Sweet Beginnings,” the American producer of the film, Rod Geiger, was a half-drunk American private stationed in Rome who bungled his way on to the set and misrepresented himself as a producer with connections. With a copy of the film in his barracks bag, Geiger somehow managed a theatrical distribution deal when he got back to the states, even though, according to Fellini, Geiger was “a nobody and didn’t have a dime.” Geiger disputed Fellini’s account, however, and the essay was the subject of a defamation lawsuit that led to the film being banned due to legal reasons in some countries.

Roma, Città Aperta is a very good film, but I think its reputation as a masterpiece is partly due to when and how it was released. In my opinion, Luchino Visconti’s 1943 film Ossessione is just as good, if not better, but it wasn’t shown in the United States until the ’70s, partly because it was produced during the war, but mostly because it was an unauthorized adaptation of James M. Cain’s 1934 novel The Postman Always Rings Twice and legal trouble affected its distribution. It’s a must-see for students of cinema, especially ones interested in both film noir and neorealism.