H.C. Potter’s The Farmer’s Daughter has a title that makes it sound as if it might be an extended dirty joke that also involves a traveling salesman, but it’s not. It’s a funny, romantic, and inspiring film about a young woman whose life takes a very different direction than the one she expected it to take when she left home for the big city.

Katrin Holstrom (Loretta Young) lives on a farm in “Redwing County” with her Swedish father and mother (Harry Shannon and Anna Q. Nilsson) and her three brothers, Peter (James Arness), Olaf (Lex Barker), and Sven (Keith Andes). She goes to Capital City (a thinly veiled Chicago) to pursue a nursing degree, but an unscrupulous “friend” of her family named Adolph (Rhys Williams) weasels all of her money out of her and she’s left penniless.

She takes a job as a maid in the palatial home of Agatha Morley (Ethel Barrymore), a grand dame and behind-the-scenes political figure whose son, Glenn Morley (Joseph Cotten), is a congressman. When asked about her qualifications, Katrin tells Ethel that at home, she makes six beds every morning, does the washing and ironing for her three brothers, herself, and mama and papa, cleans all seven rooms and does dishes, helps mama with the canning — preserves, meat, eggs, dill pickles, smoked ham, and bacon — waits on tables (40 hands at harvest time), and makes glögg at Christmas. And that’s just what she does indoors. Outdoors, she plows with a horse and tractor, hoes potatoes, shucks wheat, milks cows, beds horses, butchers pigs, kills and dresses chickens, and cuts wood for both mill and stove.

She doesn’t mention that she also give back-cracking, limb-twisting, lung-emptying Swedish massages, which she does for Glenn while he’s recovering after falling through the ice while skating with her. 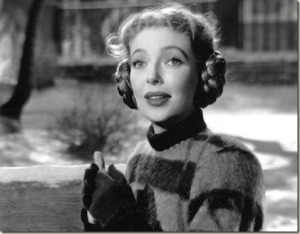 Katrin is also a whip-smart young woman who speaks her mind as easily as she breathes. During a party for political bigwigs at the Morley home, where Katrin is serving drinks, a congressman named Wilbur Johnson (Thurston Hall) says it’s too bad Katrin has only just moved to town, because a vote from a pretty girl like her would have made his victory complete. She responds, “Oh, I’m sorry, sir, if I could have voted, I wouldn’t have voted for you.” He’s taken aback, but her Swedish-accented, lilting, matter-of-fact delivery leaves him speechless.

After the party, Glenn asks Katrin why she doesn’t like congressman Johnson, and she says it’s because he opposes a higher minimum wage. She agrees with Johnson that people should be responsible for themselves, but she believes in a living wage. When Glenn asks her what she means, she responds, “A living wage depends on whether you’re getting it or giving it.”

After Katrin stands up at a political rally and poses a series of hard questions to the Morleys’ candidate, Anders J. Finley (Art Baker), including a number of very specific questions about his record that show she’s done her homework, the opposition party asks her if she’d like to run against Finley for a seat in Congress.

Katrin’s no-nonsense, can-do, take-charge attitude takes her as far in politics as it did back on the farm, but her opposition to the Morleys’ candidate threatens the budding romance between her and Glenn. It also drives her back to her family farm in despair after a vicious smear campaign is launched against her.

As with most political movies, the film is careful not to offend anyone by getting too deeply into hot-button issues. It’s also not very nuanced. By the end of the film, Finley has gone from being a condescending chauvinist to a figure of pure evil who is in league with both gangsters and home-grown fascists.

But The Farmer’s Daughter still manages to be a very funny and occasionally sharp political satire. The script by Allen Rivkin and Laura Kerr is wonderful, and the actors all play their parts to perfection. Ethel Barrymore conveys much without even speaking, and Charles Bickford is especially good as the Morley’s crusty old butler, Joseph Clancy.

Loretta Young was the surprise winner of the Oscar for best actress at the 20th Academy Awards for her role in this film. (Rosalind Russell had been heavily favored for her performance in Mourning Becomes Electra.) I can’t compare Young’s performance to any of the other women who were nominated, because I haven’t seen their films yet, but I think her win was well-deserved. Katrin Holstrom, with her blond hair tied up in coiled buns and her Swedish accent, could have easily been a caricature, but Young imbues her with so much liveliness and depth that I fell in love with her, and was rooting for her all the way.

The Farmer’s Daughter has a light touch, and is very funny, but it’s still an inspiring film. Remember that when it was made, women had only had the right to vote at the national level for slightly more than 25 years, and only 41 women had served in the United States Congress.