Based on the novel by Theodore Strauss, Moonrise stars Dane Clark as a man named Danny Hawkins who is haunted by his father’s execution for murder. Danny has grown up in the shadow of his father’s crime, both figuratively and literally (this is a noir, after all).

In nightmarish flashback scenes, we see the young version of Danny being mercilessly taunted by his schoolmates.

In the first few minutes of the film, the grown-up version of Danny finally lashes back at the worst of the bullies, Jerry Sykes (Lloyd Bridges), who is the son of the wealthiest man in town. Danny beats Jerry Sykes to death on the outskirts of a carnival, and leaves his body to be discovered by the authorities.

For the rest of the film, Danny is tormented by guilt but is too terrified to turn himself in. And soon after the murder, he strikes up a desperate romance with Jerry Sykes’s girl, Gilly Johnson (Gail Russell), a schoolteacher and the prettiest girl in town.

Moonrise was an attempt by Republic Pictures to break out of their Poverty Row rut and release an A picture. (The budget was $849,452, whereas the Western B pictures the studio pumped out on a regular basis usually cost around $50,000.)

It was still a modestly budgeted film by Hollywood standards, and Borzage shot the entire film on only two sound stages. Although Moonrise wasn’t a hit, I think the claustrophobic “staginess” works in the film’s favor when watched today. Lionel Banks’s art direction and John L. Russell’s cinematography give the film a dreamlike quality. Especially in the early going of the film, there are instances of dream logic — such as a terrible car accident that seems to have no consequences in the next scene — but that only contributes to the film’s hypnotic power.

Dane Clark’s performance as Danny is similar to the romantic, sad-eyed fugitive he played in Deep Valley (1947). Gail Russell is gorgeous, although her role as Gilly mostly requires her to be wide-eyed and worried.

There’s some really terrific work by the supporting cast. Lloyd Bridges only has a minute or two on screen, but his nastiness and sense of entitlement is palpable. Ethel Barrymore is wonderful, as always, as Danny’s grandmother. Allyn Joslyn grounds the film with his role as philosophical sheriff Clem Otis. And African-American actor Rex Ingram gives an amazing performance as Mose, Danny’s friend who lives deep in the swamp, raises and trains dogs, and avoids people as much as possible. The character of Mose has aspects of the “magical Negro,” but Ingram is a good enough actor — and the part is written well enough — that he mostly escapes cliché.

Moonrise is a hard film to categorize. It’s stylistically a film noir, but thematically it ranges from Southern Gothic to European art film. It’s worth seeing if you have any affinity for any of those genres, or even if you’re just someone who can appreciate a beautifully made black and white movie. 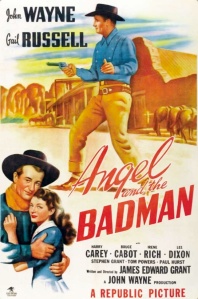 James Edward Grant’s Angel and the Badman is a fish-out-of-water story about a gunfighter named Quirt Evans (John Wayne) who renounces violence after he is injured and nursed back to health by a pretty Quaker girl named Penelope Worth (Gail Russell) and taken in by her community. Like most Hollywood movies of this sort, Angel and the Badman has its cake and eats it too — it preaches nonviolence, but is still jam-packed with gunfights and fistfights.

The action is fast and furious from the very opening moments of the film, which begins with a close-up of a gun being drawn, the shooter fanning the hammer, firing from right to left, emptying the cylinder, and then running to his horse.

Angel and the Badman was John Wayne’s first time as a producer, and it feels like a labor of love. Unfortunately, the direction, cinematography, and pacing of the film aren’t up to the standard of Wayne’s other pictures I’ve seen from the ’40s. The music is especially bad, and is rarely appropriate for the scene it’s accompanying. At its heart, Angel and the Badman is a B picture with an A-list star.

The film ends with a line that could be interpreted as pro gun control — “Only a man who carries a gun ever needs one.” This is a rarity for a western, especially one starring John Wayne, but if you’re a traditional sort, don’t worry; all the bad guys die of lead poisoning before the film is through.