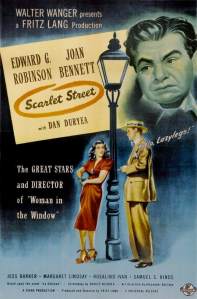 Fritz Lang’s Scarlet Street immediately draws comparisons to Lang’s 1944 film The Woman in the Window. Released just a year apart, both films star Edward G. Robinson, Joan Bennett, and Dan Duryea. Both films feature Bennett as a femme fatale, Robinson as a milquetoast man approaching old age who is desperate for some kind of excitement, and Duryea as a hustler and a punk who’s only out for himself. The two films share motifs; murder with sharp objects, city streets at night, painted portraits, and foolish old men ensnared by mysterious young women.

In terms of tone and plot, however, the two films are quite different. The Woman in the Window is a well-crafted tale of mystery and suspense in which a murder occurs early on, and the protagonist spends the rest of the film dealing with the consequences. It’s a good picture, but its impact is undercut by a cop-out ending (possibly necessitated by the Hays Code) that castrates the grim dénouement and breaks the most basic rule of maintaining audience engagement with a narrative. Scarlet Street, on the other hand, is grim and fatalistic, and its single, horrific murder doesn’t occur until near the end of the picture. Robinson’s character in Scarlet Street isn’t drawn into a suspenseful adventure in which he has to hide evidence and protect a woman’s honor, he’s drawn into a doomed romance with a heartless and conniving young woman, and he only realizes the trap he’s walked into until long after its jaws have clamped shut around him.

Scarlet Street opens on a scene of a party. It’s the kind of party we don’t see very often in the movies anymore. There are no women, and all of the men are dressed in tuxedos. Christopher Cross (Robinson) is receiving a gold pocket watch for his 25 years of service as a cashier in a bank. When Cross’s employer, J.J. Hogarth (Russell Hicks), stands up, he is clearly the man in charge; tall, commanding, and about to leave the party for a date with a blonde. Cross sits on the opposite side of the table and appears diminutive and meek. When Cross reads the engraved message on the watch, “To my friend, Christopher Cross, in token of twenty-five years of faithful service, from J.J. Hogarth, 1909-1934,” he seems genuinely touched by the line, “To my friend,” and pauses briefly after reading the words to smile. He is clearly a man with few friends.

He is also a man locked in a loveless marriage. We later learn that he married his landlady just a few years earlier, after her police detective husband died while trying to save a woman from drowning. Her late husband’s ridiculously large portrait hangs above the mantle in their living room, and Adele Cross (Rosalind Ivan) never misses an opportunity to unfavorably compare Chris with her “heroic” first husband.

On his way home from the party, Cross meanders through the rain-slicked streets of Greenwich Village. He sees a young man beating up a young woman under elevated train tracks, and he impetuously runs to her aid. His rescue attempt can barely be called heroic (he covers his eyes as he jabs her assailant with his umbrella), but it is still an act of courage, which makes what comes next so tragic.

Scarlet Street is based on the novel La Chienne (The Bitch), by Georges de La Fouchardière, which was adapted as a play by André Mouëzy-Éon, and as a film in 1931 by Jean Renoir. The French title pretty much sums up Kitty March (Bennett). She and her “boyfriend” Johnny Prince (Duryea) only care about money and the objects money can buy. As soon as Chris tells Kitty that he paints, she gets the idea in her head that he’s famous and rich, and that she’ll be able to squeeze him for all he’s worth. Of course, he only paints on Sundays as a hobby, but he initially lets her believe that he’s a painter, just as he lets himself believe her claim that she works as an actress.

This being a film from the ’40s, the words “pimp” and “prostitute” are never spoken, but if the viewer infers that Kitty is a prostitute and Johnny is her pimp, absolutely nothing in the film contradicts the idea. (And this was indeed their relationship in La Chienne.) It is clear that Kitty has no regular job, but she regularly ponies up money to give to Johnny. Johnny also has no visible means of support except the money she gives him. He hustles a little here and there, but it seems as if his main source of income is Kitty. At one point in the film she even states that she’s given him a total of $900 over a course of time, and that she’s still waiting for him to buy her a ring with that money. That’s an incredible amount of money for a woman with no job or inheritance to produce in 1945, unless she was tricking. Also, the fact that she’s giving him money that she then asks him to possibly spend on her implies a pimp-prostitute relationship.

The one-way exchanges of money and Johnny’s casual mention of various men from whom Kitty could get $50 for the night isn’t the only thing that marks Johnny as a pimp and Kitty as his whore. The casual way he slaps her around several times over the course of the film implies this, as well as the fact that he constantly refers to her as “Lazylegs.” Later in the film we even learn that Johnny was beating her up in the street at the beginning of the film because she showed up at the end of the night with less money than he expected.

The callousness of Johnny and Kitty and their pimp-prostitute relationship isn’t the only taboo this film breaks. Scarlet Street may very well be the first film made after Hollywood began enforcing the Hays Code that shows a character committing a murder that goes unpunished. Scarlet Street was distributed by Universal Pictures, but it was independently produced by Fritz Lang Productions, which may have given Lang more leeway in the way he presented his conclusion. On the other hand, the end of the film isn’t really about “getting away with murder,” since the hell the murderer is trapped in is worse than any earthly prison. It’s a bleak, existential ending, and one of the most tragic I have ever seen.