For me, Lewis Allen’s Desert Fury is currently running neck and neck with Felix Feist’s The Devil Thumbs a Ride for the honor of “wackiest movie of 1947.”

But maybe I’m comparing apples to oranges. While The Devil Thumbs a Ride was a zany thrill ride with oddball characters and a lot of unexpected humor, Desert Fury is a ridiculously campy melodrama in which most of the humor seems unintentional.

Also, it has gay undertones that are strong enough to power a small city for a year.

The poster on the right implies that Burt Lancaster and John Hodiak spend the movie fighting for Lizabeth Scott’s love, but that’s not the case. More accurate is the tagline: “Two men wanted her love … The third wanted her life!”

Scott plays a beautiful 19-year-old girl who lives in a “cactus graveyard” in the middle of nowhere — Chuckawalla, Nevada. She lives with her mother, Fritzi, who’s played by Mary Astor (an actress from Hollywood’s Golden Age who was just 16 years older than Lizabeth Scott). Fritzi always calls Paula “baby.” Not in a sweet, maternal way, but the way a barfly might say, “Hey, baby! C’mere!”

Fritzi wants Paula to go back to school, but Paula wants to help her mother run the Purple Sage Casino. (Paula’s father was a bootlegger who was killed when Paula was very young.)

Burt Lancaster plays Tom Hanson, a former bronco buster who barnstormed around the country, but washed out of the rodeo and now works as a sheriff’s deputy in Chuckawalla. Fritzi wants Tom to marry Paula and make an honest woman out of her. He’d like nothing more than to marry Paula, but he doesn’t push, because he knows that her love for him is strictly platonic.

Into their lives comes runty, mustachioed gangster Eddie Bendix (John Hodiak) and his gunsel Johnny (Wendell Corey), and Paula — quite inexplicably — falls head over heels in love with Eddie.

Johnny is more than just Eddie’s “muscle.” He’s his longtime companion, his best friend, and — just possibly — his lover.

Is he or isn’t he? Let’s look at the evidence. Eddie and Johnny form a tight unit, and seem to both know what really happened to Eddie’s first wife, who died in a car accident. Johnny hates Paula, and seems insanely jealous of her relationship with Eddie.

And how does Eddie explain to Paula how he first hooked up with Johnny?

“I was your age, maybe a year older. I was in the automat off Times Square about two o’clock in the morning on a Saturday. I was broke, he had a couple of dollars, we got to talking. He ended up paying for my ham and eggs,” he says, a note of shameful resignation creeping into his voice.

“I went home with him that night. I was locked out. Didn’t have a place to stay. His old lady ran a boarding house in the Bronx. There were a couple of vacant rooms. We were together from then on.” 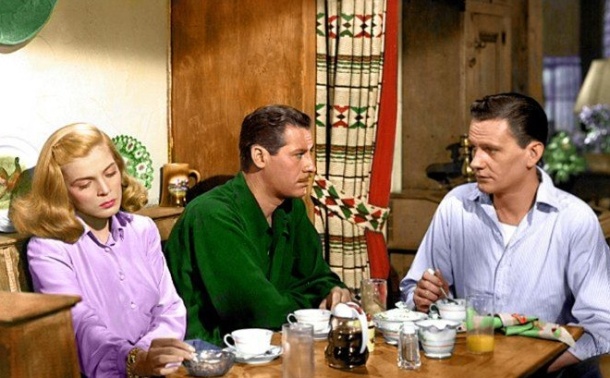 The relationship between Eddie and Johnny isn’t the only hint of a gay union. Paula and Fritzi are so close in age, and Fritzi’s attitude toward her daughter lacking so much maternal warmth, that they seem more like a lesbian couple than anything else. Fritzi seems like the older, more dominant one, and Paula seems like the younger, more restive one, who might also be interested in men. (In further defense of this reading, Lizabeth Scott and Burt Lancaster might walk off into the sunset at the end of the picture, but their lips never meet. The final — and most passionate — kiss of the film is the one Fritzi plants on Paula’s lips.)

There’s a lot of talent in front of and behind the camera, but that only counts for so much. For instance, compare Miklós Rózsa’s brilliant score for Brute Force (1947) with his score for Desert Fury. His score for Desert Fury is powerful, but without the dramatic underpinning of a great film, it just writhes and flails all over the place, seemingly in search of a better movie, or at least a more lively one.

The script by Robert Rossen (with uncredited assistance from A.I. Bezzerides), which is based on Ramona Stewart’s novel Desert Town, has a lot of snappy dialogue, but the story just doesn’t move with much intensity. Also, the Technicolor cinematography really undercuts some of the noir elements of the story and the situation.

Desert Fury is campy, and worth seeing if you’re into camp, but that’s about it. Also, if you’re a connoisseur of face-slapping, there’s plenty of that going around, too. 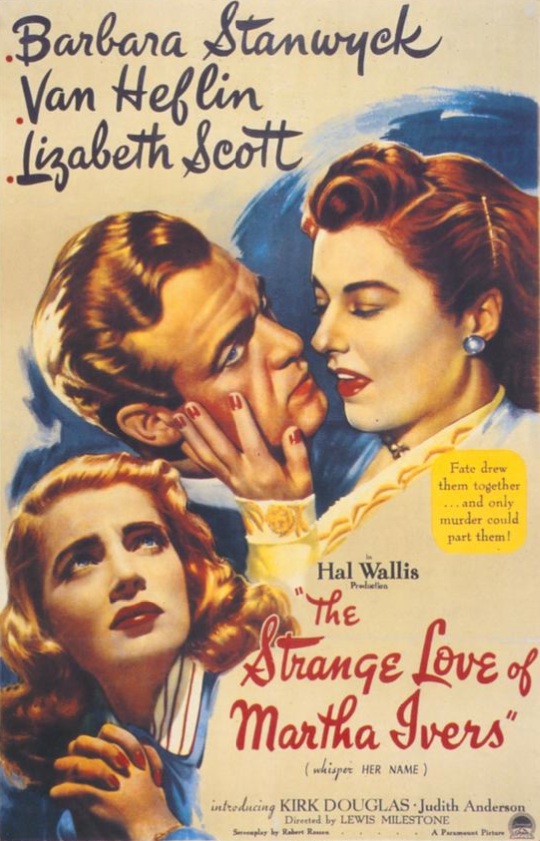 The Strange Love of Martha Ivers is based on a short story called “Love Lies Bleeding” by playwright John Patrick, who published it under the name “Jack” Patrick. I don’t know why the name was changed when it was made into a movie; possibly it was deemed too gruesome. It’s a great title, but I’m glad that it was changed to a more generic one. I had no idea what I was in for.

Their plans hit a snag when they’re found by the police. Sam gets away, but Martha is taken home, and we see exactly what she’s trying to get away from. Her aunt, Mrs. Ivers (Judith Anderson), is a villain straight out of a fairy tale. Mrs. Ivers is fawned over by the sycophantic Mr. O’Neil (Roman Bohnen), Martha’s tutor. O’Neil keeps dropping none too subtle hints that his bookish son Walter (Mickey Kuhn) is perfect Harvard material, if only they had the money to send him one day.

The tongue-lashing and threats Martha receive from her aunt when she’s brought home by the police are bad enough, but later that night, when the little cat that Martha keeps hidden in her room gets out, Mrs. Ivers really goes over the top in the cartoonish villainy department and attempts to beat it to death with her cane. To protect her pet, Martha pushes her aunt down the stairs. She tumbles down the staircase and breaks her neck. Walter O’Neil witnesses Mrs. Ivers’s death. His father didn’t, but he suspects what really happened. However, when the children are questioned by the police, he backs up the story Walter and Martha concoct about a mysterious intruder.

There’s just one more wrinkle. That night, Sam Masterson had snuck into Martha’s bedroom, and was somewhere in the house. Did he see what really happened? We won’t know for awhile, because Sam runs off, and isn’t seen again.

The story jumps forward 18 years to 1946. Walter O’Neil (immediately recognizable by his priggish demeanor and his wire-rimmed spectacles) is now played by Kirk Douglas. When we first see him, he’s three sheets to the wind, but through his slurred exposition we learn that he’s now the district attorney of Iverstown, and is married to Martha, who is now played by Barbara Stanwyck. Walter clearly loves Martha, but she despises him.

After the death of Mrs. Ivers, Martha’s tutor, Mr. O’Neil, took control of her family fortune, and blackmailed her into marrying his son. Walter lived up to his potential and went to Harvard with the help of Ivers money, but he is tortured by the secret he and Martha share. Not only did he help cover up Martha’s role in her aunt’s death, but years later, he prosecuted the drifter the police picked up for the murder of Mrs. Ivers, and sent the man to the death house. Martha isn’t just an innocent victim in the affair, however, and as the film goes on, she becomes more and more villainous.

Then again, so does Walter. Douglas gives a really fine performance in this film — the first of many in his long career — as a vindictive man who is morally weak but who possesses enormous political and legal power. Stanwyck, also, is fantastic as always. I think the first movie I saw her in was Billy Wilder’s Double Indemnity (1944), and I thought she was really funny-looking. I couldn’t see what Fred MacMurray saw in her, or why he would go to such ridiculous and homicidal lengths to be with her. But after seeing her in this film and the excellent melodrama My Reputation (filmed in 1944 but released theatrically in 1946), I’m starting to see it. While not a great beauty, Stanwyck has a gritty, vibrant quality that demands attention. She is always fascinating to watch.

The present-day plot gets rolling when Sam Masterson (now played by Van Heflin) rolls back into town. Now a good-natured drifter and gambler, he doesn’t even intend to visit Iverstown, but when he carelessly drives his car into a sign while giving a hitchhiker (Blake Edwards) a lift, he’s forced to.

While paying a visit to the house he grew up in, Sam meets a beautiful young woman named Antonia “Toni” Marachek (Lizabeth Scott), who has just been released from jail. The two itinerants are immediately drawn to each other, but their budding romance is going to be put through its paces as soon as Walter and Martha discover that Sam is back.

Believing that Sam has purposefully returned to blackmail them, Walter sets his thugs on both Sam and Toni, jailing Toni for violating her probation and taking Sam for a ride and leaving him beaten on the side of the road outside of town. If you’ve ever seen a film noir before, you’ll know that guys like Sam don’t like to be pushed around, and when they are, it only strengthens their resolve not to turn tail and run. But you’ll also know that dangerous women attract them like honey attracts flies, and when Martha tries to get her hooks back into Sam, things won’t be easy for any of the four leading characters.

The Strange Love of Martha Ivers is on the long side (just shy of two hours), and the plot has a lot of moving parts, but the script by Robert Rossen and an uncredited Robert Riskin is excellent, and never bogs down. Lewis Milestone’s direction is sharp. Really, this is just a great film. Everyone who likes classic cinema should see it, not just fans of noir.

On a note completed unrelated to the film, I find it interesting that three of the four principal actors worked under pseudonyms. Kirk Douglas was born “Issur Danielovitch Demsky,” Barbara Stanwyck was born “Ruby Catherine Stevens,” and Lizabeth Scott was born “Emma Matzo.”

Incidentally, Scott was born into the Matzo family in 1922 in Scranton, Pennsylvania (the state where this film takes place). With her angular features and husky voice, Lizabeth Scott reminds me a lot of Lauren Bacall, but she’s even sexier, which I didn’t think was possible until I saw this movie.