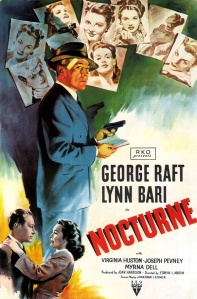 Edwin L. Marin’s Nocturne is close to being a great film noir, but not that close. It’s an entertaining mystery thriller with plenty of clipped, hard-boiled dialogue that’s fun to listen to, if not particularly credible.

George Raft plays Lt. Joe Warne of the Los Angeles police, and it’s a role that seems designed to play to the public’s perception of Raft as a gangster and a thug. Warne conducts his murder investigation with the subtlety of a steamroller, pushing a mustachioed Lothario into the pool when he gets in his way and ripping up the roll of a player piano in a diner when the owner won’t cooperate with him.

And when was the last time you saw a hard-boiled detective who lived at home with his mother? It’s the kind of oddball detail that feels as if it would be more at home in a gangster movie starring James Cagney.

Raft’s first big role was as Paul Muni’s sidekick in Howard Hawks’s Scarface (1932). After that he starred in a string of gangster pictures, and was one of the most popular actors in crime melodramas, along with Cagney and Edward G. Robinson. His boyhood friendship with gangster Owney Madden and association with men like Bugsy Siegel and Meyer Lansky aided the public’s perception of him as a hard man who didn’t just “talk the talk.”

By the ’40s, however, his star was beginning to fade. Turning down the lead roles in High Sierra (1941), The Maltese Falcon (1941), and Double Indemnity (1944) didn’t help matters. (Raft was reportedly functionally illiterate, which may have made choosing scripts difficult.) It’s safe to say that by 1946, he was getting the scripts that Humphrey Bogart used to line his birdcage.

Raft wasn’t a very expressive actor, and he had the range of a T-bone steak, but his tight-lipped acting style was perfect for B movies like Nocturne.

A flamboyant pianist and composer named Keith Vincent (Edward Ashley) is murdered, presumably by one of the nine brunettes he was running around with. He has glamour shots of all of them lining one wall of his living room, and it’s clear they were all interchangeable for him, since he called them all “Dolores.” (This may seem like a clever device to hide the identity of the murderess from the viewer, but it’s not.)

Lt. Warne investigates with ham-handed glee, and his investigative technique is as sloppy as the filmmaking. For instance, in one scene his chief (Robert Malcolm) bawls him out for bothering a character named “Mrs. Billings,” but apparently her scenes were left on the cutting room floor. This is fine, but why leave references to her in the film? Similarly confusing is the fact that Warne’s chief gives him two days to investigate Vincent’s murder on his own, but we only find this out after the two-day period is over. And it’s only after this two-day investigative blitz that Warne goes back to Vincent’s house and notices that one of the pictures is missing, since the pattern is disrupted, and there’s an enormous nail hole in the wall. Looking at the stamp on the back of one of the other pictures leads him to a sleazy photographer named Charles Shawn (John Banner). Wouldn’t a detective worth his salt have noticed all this immediately? 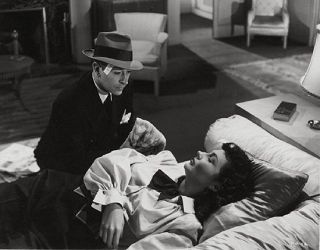 The most enjoyable thing about this film is the atmosphere. Lt. Warne spends a lot of time in smoky nightclubs, including the unique Keyboard Club, in which a hulking man-child named Erik Torp (Bern Hoffman) pushes a pianist named Ned “Fingers” Ford (Joseph Pevney) and his upright around on a rolling platform so they can take requests, table by table. When they get to Warne’s table, he hands Vincent’s unfinished piece “Nocturne” to Fingers to play. When he reaches the end of the handwritten sheet music, Fingers asks, “What did your friend do, run out of notes?” Warne responds, “More or less.”

Plenty of sex and sleaze run right below the surface of the picture, but it’s all pretty lighthearted. There’s a funny scene in a dance studio in which Warne can’t learn even the most basic steps (it’s mostly funny because Raft was a professional dancer), and his romance with his prime suspect, Frances Ransom (Lynn Bari), doesn’t carry much sense of danger or menace.

Nocturne is a really fun picture, despite its shortcomings. It has some of the snappiest, most hard-boiled, least naturalistic dialogue I’ve heard since I watched The Dark Corner (1946). Fans of B noirs are encouraged to seek out this picture.