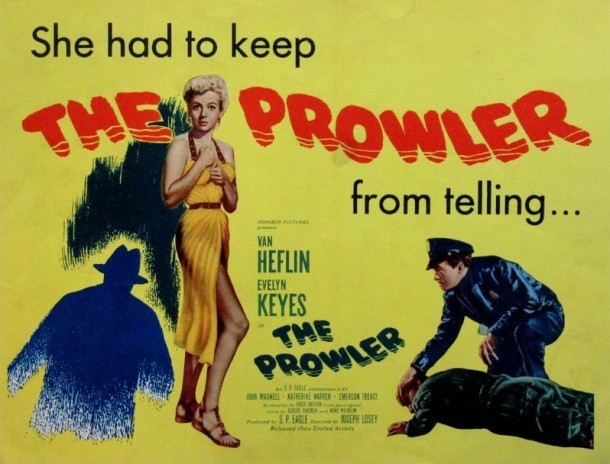 The Prowler is a queasy movie about voyeurism, stalking, and sexual power dynamics, and it’s just as relevant today as it was when it was released.

Evelyn Keyes — a very good actress who appeared in a lot of “small” films but is mostly remembered for playing Suellen O’Hara in Gone With the Wind — turns in a star performance as Susan Gilvray, a lonely and frustrated married woman who spends her nights alone in a great big house in Los Angeles. In a brief POV shot before the opening credits, we see her in her bathroom, wearing a towel. She looks out the window, directly at the camera, and screams.

The interesting thing about The Prowler is that while that Peeping Tom looms large over everything that happens next, we never see him, and the viewer can never entirely be sure that he wasn’t a figment of Susan’s imagination.

But whether or not he exists is beside the point, because Susan soon opens her door to a more insidious threat. One of the two patrolmen who responds to the report of a prowler is Webb Garwood (Van Heflin), a slimy, bitter, superficially charming man who hates being a cop and is always looking for an “angle” so he can move up in the world.

As LAPD superfan James Ellroy is quick to point out in the supplemental features of the Blu-ray, Webb Garwood is never specifically identified as a member of the LAPD, and his badge and certain identifying features of his uniform are different from the ones worn by LAPD officers. However, Garwood’s black uniform and the fact that The Prowler clearly takes place in Los Angeles seem to mark him as an LAPD officer, despite the filmmakers’ decision to err on the side of political caution.

But just like the mysterious and unseen creeper who sets things in motion, it doesn’t really matter whether Webb Garwood is a member of the LAPD or not. He’s a rotten symbol of something much bigger. He represents the worst possibilities of unscrupulous people who have the power of the state behind them. He can sexually manipulate women, commit murder, and perjure himself, but because of his badge, juries and the general public will give him the benefit of the doubt. 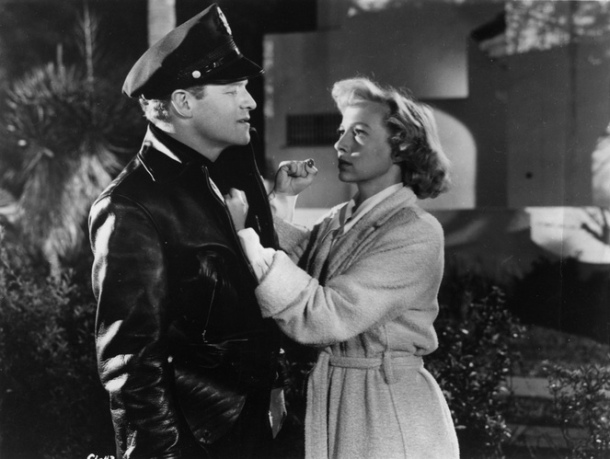 The screenplay for The Prowler — based on the story “The Cost of Living” by Robert Thoeren and Hans Wilhelm — was written by Dalton Trumbo, who was no stranger to the cruel power of the state. Trumbo had been blacklisted, but it didn’t stop him from working throughout the ’50s. It just meant he got paid much less than he deserved. (His front for The Prowler was Hugo Butler.) Trumbo is one of the greatest screenwriters in Hollywood history, and The Prowler is Trumbo at his down-and-dirty best.

I’ve seen The Prowler several times, and it gets a little better with each viewing. Evelyn Keyes and Van Heflin embody their characters. Arthur C. Miller’s black & white cinematography is haunting, and makes Susan’s hacienda look like the loneliest place on earth. Losey’s direction is crisp. Lyn Murray’s music is powerful without being overbearing. Dalton Trumbo’s script is timeless.

The Prowler is classic Los Angeles noir, and one of the best “bad cop” movies of all time.