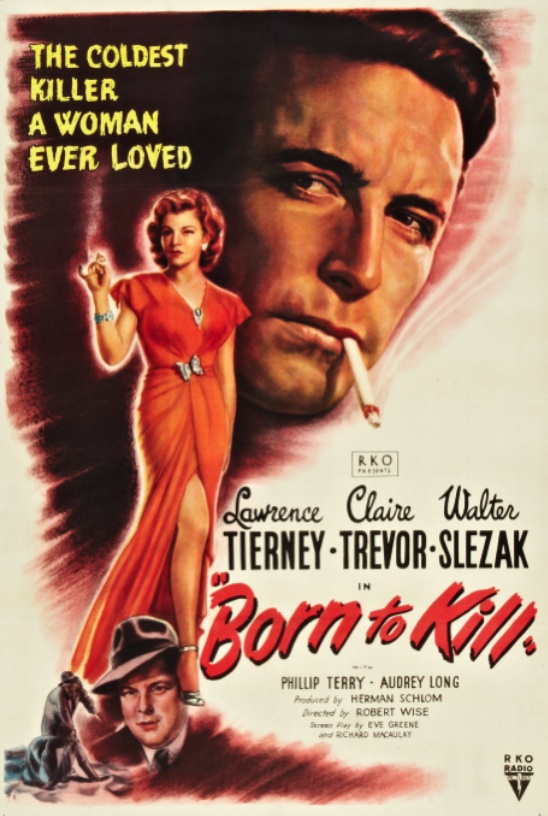 Robert Wise’s Born to Kill has never been one of my favorite noirs. It regularly tops “best of” lists, and many film noir enthusiasts whom I respect love it, so I was hoping a fresh viewing would reveal something new to me.

Alas, for me it was still the same old flick. It’s an enjoyable picture, but it’s wildly melodramatic, there are subplots that never really go anywhere, and its over-the-top characters are mostly two-dimensional. The key to a great noir, like Billy Wilder’s Double Indemnity (1944), is the sense that it could happen to you, or to someone you know. No matter how outlandish the schemes in a film are, if they’re carried out by believable characters then I’m usually able to go along for the ride without asking too many questions.

Born to Kill tells the tale of a pair of sociopathic social climbers, the recently divorced Helen Brent (Claire Trevor) and the recently paroled Sam Wild (Lawrence Tierney). Their paths cross in Reno, the biggest little city in the world. Helen is there for a quickie divorce and Sam is there with his reedy little sidekick, Mart Waterman (Elisha Cook Jr.). Helen is staying at a boarding house run by the slovenly Mrs. Kraft (Esther Howard), who, when we first see her, is getting lit up on beer in the middle of the afternoon with the adenoidal tart Laury Palmer (Isabel Jewell).

After Laury goes on a date with dapper Danny Jaden (Tony Barrett) just to make the big lug she’s dating jealous, she invites Danny inside for a nightcap. When Danny goes to the kitchen, he finds Laury’s big lug waiting for him. It’s Sam Wild, of course, and his brutal killing of both Danny and Laury is the film’s high point. (Or the lurid low point, if you’re a prissy scold.) The sound of crickets in the background, the neatly manicured suburban lawns surrounding Mrs. Kraft’s boarding house, the dog barking in the background, and the uptempo swing music playing on the radio in the kitchen all lend a sense of immediacy and familiarity to the murder.

After the murder, Sam blows town. He and Helen meet again on the train to San Francisco. When they disembark, Sam suggests splitting a cab, but Helen tells him she’s going in a different direction. He responds, “That’s where you’re wrong. We’re going in the same direction, you and I.”

Sam insinuates himself into Helen’s life. They are clearly drawn to each other, but she tells him that nothing in the world will stop her from marrying her fiancé, Fred Grover (Phillip Terry). So Sam moves in on her sister, wealthy heiress Georgia Staples (Audrey Long), or, to be more precise, her foster sister, as Helen bitterly reveals to Sam. Not only is Georgia a beautiful blonde, but — as Sam tells Mart — “Marrying into this crowd will make it so’s I can spit in anyone’s eye.”

Meanwhile, back in Reno, Mrs. Kraft retains the services of a sleazy, corpulent private investigator named Matthew Albert Arnett (Walter Slezak). Mrs. Kraft is played by Esther Howard, and her bizarre, bug-eyed performance in this film is nearly identical to the “Filthy Flora” character she played in Dick Tracy vs. Cueball (1946).

This is the second or third time I’ve seen Born to Kill. While I’ve griped about the ridiculously melodramatic plot, maybe I just want it to be something it’s not. I could certainly see myself watching it again in the future and loving its over-the-top characters, unrealistic scenarios, grotesque supporting players, and generally high level of camp.

I think my biggest problem with Born to Kill is the relationship between Sam and Helen. Claire Trevor is a wonderful performer, but I was never able to accept that she’d love Sam enough to give up everything for him. Helen’s histrionics in her scenes in tastefully appointed drawing rooms with Fred, Georgia, and Sam seem more scripted than natural, and Claire Trevor’s performance as Helen seems too intelligent and composed for the debased character she’s playing.

But maybe that’s the point. Lawrence Tierney is a powerful presence, but he isn’t a particularly gifted actor, especially when either subtlety or range is called for. Not only does Sam Wild commit murder whenever the notion strikes him, he can bend others to his will, getting his friend Mart to kill for him and getting Helen to provide him with an alibi for murder at the drop of a hat. He’s a brutal alpha male, and loving him may go against all reason and sense, but that never stopped anybody before.

Born to Kill is directed by Robert Wise with vigor. The cinematography, by Robert de Grasse, is great, especially in the nighttime exteriors. Paul Sawtell’s music is exciting. I found the plot ridiculous, but that shouldn’t stop any noir fans who haven’t seen Born to Kill from seeking it out. 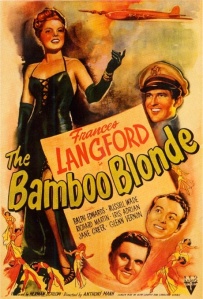 Anthony Mann’s The Bamboo Blonde is a cute little World War II-era programmer based on Wayne Whittaker’s story “Chicago Lulu.” It’s a romantic comedy, but there are nearly enough songs to qualify it as a musical. There are also nearly enough bombing raids over Japan to qualify it as a war movie, but the tone is so light that all the death and destruction on the ground is just there to provide a context for the saucy pinup girl painted on the nose of the bomber. It’s a fun romp — hell and gone from the westerns and noirs on which Mann’s reputation currently rests, but a thoroughly enjoyable way to kill 67 minutes during the dog days of summer.

The film begins with a magazine reporter named Montgomery (Walter Reed) interviewing Eddie Clark (“Truth or Consequences” host/creator Ralph Edwards), the mile-a-minute talker who runs Bamboo Blonde enterprises, an enormous conglomerate that operates a recording studio, furniture manufacturer, hosiery company, cosmetics line, and more. The reporter wants to know how the company got started, and when Eddie finally tires of trying to push Bamboo Blonde brand candy bars on the poor guy, he settles in to tell the story. It all started, Eddie explains, “Around the time Japan was finding out the B-29 wasn’t another American vitamin.”

The picture then begins in earnest, and we see the Ransoms, a wealthy family from Bucks County, Pennsylvania, tearfully send their son, Patrick Ransom, Jr. (Russell Wade), off to war. I say “tearfully,” but I can’t remember if there were any actual tears. The send-off was so wrought with emotion, however, that the presence of waterworks is beside the point. The Ransoms are the type of blue bloods who think nothing of Junior kissing mom on the mouth to say goodbye.

After cutting — or at least loosening — the umbilical cord, young Ransom wanders into Eddie’s Club 50, heedless of the sign outside barring all servicemen from entering. A couple of MPs walk out of the back office, and a perky little blonde named Louise Anderson (Frances Langford) acts quickly, hiding Ransom behind some curtains and then walking onstage to perform the song “I’m Good for Nothing But Love.”

Ransom is the new skipper of a bomber crew, and as the new guy, his boys had sent him to the club as a practical joke, or, as Ransom explains it to Louise over dinner, “Sending me here was a tactical maneuver to ditch me.” The two hit it off right away, and go on the kind of date that was really “on the beam” for the greatest generation, and is still pretty fun today. It starts with dinner at a restaurant with red and white checked tableclothes and candles stuck in bottles that’s run by a woman named “Mom” (Dorothy Vaughan) and it ends in a photo booth. The only thing that seems weird by today’s standards is that Louise sits in the photo booth alone, and Ransom ends up with a little framed photo of her.

That little framed photo will lead to big things. After a disastrous series of runs in the Pacific, Ransom’s B-29 has the worst record in the Air Force, without a single Zero downed. To turn their luck around, one of the guys borrows Ransom’s photo of Louise and paints an Alberto Vargas-style pinup of her with a stacked body “painted from memory.” After a long argument about what exact color hair their sexy new mascot has, they settle on “bamboo blonde,” and they’re well on their way to becoming “that nightmare to the Nips,” as Eddie Clark will later describe them.

The only problem is that Ransom’s crew thinks that Louise is his girlfriend, and he hasn’t disabused them of the notion, even though he has a dark-haired fiancée back home named Eileen Sawyer (Jane Greer, who shows a little bit more of that Out of the Past malevolence than she did in Sunset Pass, which was released a week before this picture). Eileen is a real harpy, and her interest in Ransom is only rekindled because of his growing fame. Meanwhile, Louise first learns that she’s been painted on the side of a bomber while reading a copy of Look magazine that has a picture of Ingrid Bergman on the cover wearing a nun’s habit (presumably from the 1945 film The Bells of St. Mary’s). You don’t have to be a genius to foresee the romantic complications that will arise once Ransom and his boys are called back home for a USO tour with Louise to help sell war bonds.

This is all frothy nonsense, of course, but Mann keeps things moving at a nice clip. Even when working with material that was clearly beneath him, such as this picture and Strange Impersonation (1946), he was able to craft something that was darned watchable. Langford was a classically trained singer, and has a really beautiful voice, which helps. (She was a radio star, and spent a lot of time as a USO performer.) For the most part, the musical numbers are staged in a straightforward fashion, but Mann takes a left turn into the realms of the surreal when Louise sings “Right Along About Evening.” Not only is everything in the idyllic farmland backdrop labeled (e.g., “mailbox,” “dog”), but it end with her rolling up a suddenly two-dimensional Ransom and stuffing him under her pillow before she goes to sleep. Truly odd.