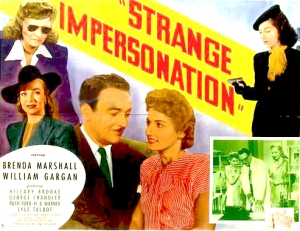 This isn’t the first time I’ve seen Strange Impersonation. Five years ago I went on a big Anthony Mann kick and watched all the movies he’d directed that I could get my hands on. I really like a lot of his work, especially the film T-Men (1947), a docudrama about Treasury agents investigating a counterfeiting ring that incorporates heavy doses of violence and a lot of subjective film noir techniques into its otherwise straightforward story. His noir revenge drama Raw Deal (1948), which, like T-Men, stars Dennis O’Keefe, is great, too. He also made a number of highly regarded westerns starring James Stewart that are worth seeing.

He made plenty of strictly for-hire programmers, too, and Strange Impersonation definitely falls into this category. Of Mann’s pictures that I’ve seen, it’s my least favorite. Not because it’s any worse than any of his other B pictures, like Railroaded! (1947), but because it breaks my first rule for maintaining audience engagement until the very end, and leaves the viewer feeling robbed.

Upon second viewing, however, and with no expectation that the film’s many plot strands would be resolved, I was able to appreciate the enjoyable lunacy of the plot and the subtexts about gender relations and women in the professional sphere. Also, for a humble programmer, Strange Impersonation looks pretty good. It has great lighting and a few really well thought-out compositions.

The film begins with a scene at the Wilmott Institute for Chemical Research in New York. Scientist Nora Goodrich (Brenda Marshall) is making a presentation to a roomful of her mostly older, male colleagues. “It’s been my aim to develop a new formula which will combine all the best features of present-day anesthetics,” Nora tells the assemblage. Pointing to a model of a human torso and head, she says, “Here is the section of the brain where the reaction will occur. It will come very quickly, within seconds of injection. The anesthesia should be complete for approximately one hour, during which time the mind may indulge in dreams or fantasies, normal or otherwise. That of course would have to be checked. For my present findings, however, the anesthetic is safe and easy to administer. So until my final report, I think that’s all.”

Remember that speech, and you may have some idea of what to expect from the film’s denouement. Upon a second viewing, Strange Impersonation plays fair, but only in the broadest sense. The journey, at least, isn’t a bad one.

Marshall gives a credible performance in the stereotypical role of the “cold fish” female scientist. She’s very attractive, but with her severe hair style and glasses, she doesn’t look like a glamour puss pretending to be a smarty-pants doctor; she comes off as relatively convincing.

The same can’t be said of all of the ridiculous lines she’s forced to spout. When her fiancé, a fellow scientist named Stephen Lindstrom (played by William Gargan with a little mustache and big, nerdy glasses) tries to kiss her in the lab, Nora blurts out, “Stephen, remember! Science!”

Nora and Stephen are engaged, but she’s putting off the wedding until after her experiment is complete. Not to worry, though. The experiment will be complete soon. Why go through all the red tape of clinical tests when you can experiment on yourself, at home, at night, with just a few pieces of laboratory equipment and your friend Arline Cole (Hillary Brooke) to help?

And that’s just what Nora plans to do, except that she hits a wrinkle on her way home. While backing out of her garage, she knocks down a young woman named Jane Karaski (Ruth Ford). As a bystander notes, Jane is “squiffed” (i.e., very drunk), so Nora offers to drive her home. Before she can engage the clutch, however, a weaselly little ambulance chaser named J.W. Rinse (George Chandler) shoves his card into Jane’s hand and promises he can get her a big settlement, even though she doesn’t appear to be injured. Jane lives in a crummy little place with a Murphy bed above a spot called Joe’s Bar and Grill. While putting Jane to bed, Nora learns that Jane is from Mississippi, and has no friends in the big city or family back home.

Nora heads back to her large, tastefully appointed apartment overlooking the city. Stephen drops in for what he hopes will be a tryst, but before too long, Arline shows up, shoos him away, and it’s time for some science with a capital S.

And guess what? Something goes wrong. As soon as Nora’s passed out, Arline starts a chemical reaction that starts a fire right next to Nora on the couch, then dumps the flaming concoction on Nora’s face.

While Nora is recovering in the hospital, Arline tricks the doctor into keeping Stephen away from her, which leads her to believe that he has abandoned her because of her ruined face. Meanwhile, Arline starts putting her hooks into Stephen. It becomes clear that she destroyed Nora’s face not because of any professional jealousy, but because she had designs on Nora’s man.

Eventually, Nora returns home, wearing a veil and sporting some pretty convincing burn make-up. One night, Jane, the girl Nora hit with her car, shows up with a little automatic, apparently egged on by Rinse’s promises of a big settlement that has yet to materialize. She wants money, and she wants it now. The two women struggle for the gun, and Jane is knocked off of Nora’s balcony and falls to her face-decimating death on the sidewalk below. The stolen ring on Jane’s finger leads people to believe it’s Nora’s corpse. Meanwhile, Nora takes advantage of the confusion to slip away to Los Angeles under the name “Jane Karaski,” where she undergoes a very long course of plastic surgery at the Los Angeles Medical Center.

While reading the latest copy of “Chemical Views” in the hospital, Nora learns that Dr. and Mrs. Lindstrom have just bought a house in White Plains. Realizing Arline’s deception, she begs to leave, but is told it will be another three months before her face is fully restored. (She’s already been there about a year.) Her doctor tells her he can tell she never looked the way she does now, and not to think that changing one’s face can change one’s life. This scene is really weird, because once the bandages come off we learn that she gave her doctor pictures of Jane Karaski, and now supposedly looks exactly like the woman she accidentally killed. However, Nora looks exactly the same as she did before, only with black hair.

Apparently the characters in the film are seeing something very different from the viewers in the audience, because once Nora returns to New York and insinuates herself into the lives of Stephen and Arline under the guise of a new laboratory technician named “Jane Karaski,” neither of them recognizes her. I guess we’re just supposed to take it on faith that Nora’s surgery has left her looking like a dead ringer for Ruth Ford, even though she still looks exactly like Brenda Marshall with a black dye job.

If you can accept all the wackiness, there’s plenty to entertain in Strange Impersonation. The final interrogation scene in the police station, for instance, is a classic of feverish noir subjectivity, with all the characters in the film appearing in superimposition to accuse and admonish Nora as she shakes her head from left to right, screaming for them to stop.

Not to worry, though! The film has a happy ending. Just not for the audience.