Pal rides again! In Fred M. Wilcox’s Courage of Lassie, the irrepressible little scamp from whose seed all dogs who ever played Lassie are descended plays an orphaned collie. The little guy is left behind in an idyllic, Technicolor wilderness after the old fisherman who owns Lassie rows off with her and what he thinks are all of her puppies.

There follows a delightful montage of the little collie frolicking in the woods for days with birds, other four-legged beasties, and even a big black bear. This being a kid’s movie, however, you can be sure that gut-wrenching tragedy is right around the corner. Sure enough, the collie puppy and his little fox friend are caught in stormy rapids, and the fox is washed away, presumably to his death. The puppy, balanced on a tangle of branches, safely makes it to shore. Seemingly unfazed by his little buddy’s demise, the puppy’s next move is to happily run off with Elizabeth Taylor’s pants, and a lifelong bond is formed.

Taylor was 14 years old when she appeared in this film. Just like Pal, she’s playing a different role than she played in the film Lassie Come Home (1943). I think Taylor was a fantastic child actor. Just like in National Velvet (1944), she takes material that could be laughable or treacly and performs it with such conviction that you can’t help but be swept along. As Kathie Merrick, she believes in her dog, whom she names “Bill,” even though her family doesn’t think he has what it takes to be a sheep-herding dog.

By the end of the film Bill will prove that he not only has “the right stuff” in the pasture, but that he can be drafted and serve under heavy fire just like any other red-blooded American boy.

Bill goes through a lot in this film. He’s shot by a couple of dopey young hunters with quick trigger fingers, he’s run over by a truck while herding sheep across the road (and carried off by the well-meaning driver who doesn’t realize Bill belongs to someone), he’s renamed “Duke” at Dr. Colman’s Dog and Cat Hospital in the big city, and he’s trained for war and shipped off to the Aleutians to fight the Japanese.

“Duke” performs bravely despite a bloody neck wound, dragging himself through the mud to deliver a message, then leading the reinforcements back to the troops. He saves the day, but suffers from shell shock. He escapes the train that is taking him home and runs off into the area of the country where he remembers being with Kathie. Unfortunately, his PTSD has taken a toll, and he lives as a feral animal, raiding hen houses and killing local livestock. Kathie saves him from a farmer’s bullet, but he’s still put on trial as a mad dog.

Things look pretty grim for Bill until Harry MacBain (Frank Morgan, who played Prof. Marvel and the Wizard in The Wizard of Oz) makes an impassioned plea for understanding. This is the most interesting part of the film, since MacBain has looked up Bill’s war record, and his speech is a thinly veiled reference to human veterans who may be acting differently after their service overseas. Violent, antisocial behavior and drastic personality changes can be a byproduct of serving in combat, he says, and we on the homefront shouldn’t be so quick to judge our returning veterans. Even if they’re not lovable border collies. 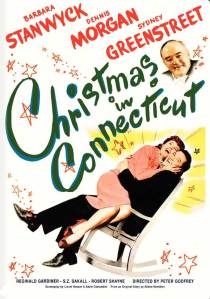 Barbara Stanwyck was a superstar of screwball comedies, and she created one of the all-time great femmes fatales in Billy Wilder’s Double Indemnity (1944). Christmas in Connecticut is one of her minor efforts, but it’s amusing enough, and if you’re specifically looking for a holiday film, you could do a lot worse.

Stanwyck plays a renowned magazine food writer named Elizabeth Lane, a woman whose public persona might remind modern viewers of Martha Stewart. She writes about her perfect life in Connecticut, describing her beautiful snow-blanketed farm, her husband, her child, and the lavish meals she prepares. She has a loyal readership of both men and women. Women aspire to be like her and men dream of having a wife like her. In reality, however, Lane lives in a cramped studio apartment in Manhattan, types her columns next to a hissing radiator, and can’t boil an egg. She’s a talented writer, but that’s it. Her recipes all come from her restaurateur friend Felix (S.Z. Sakall). Her editor, Dudley (Robert Shayne), knows her secret, but her publisher, Alexander Yardley (Sydney Greenstreet), does not, and that’s where the trouble starts. Mr. Yardley thinks it would be terrific publicity to reward a handsome but malnourished young sailor named Jefferson Jones (Dennis Morgan), who survived a German U-Boat attack on his ship, with a Christmas dinner hosted by Lane and her husband. Who does not exist. At a country home that does not exist.

In classic screwball comedy fashion, confessing right away and letting the chips fall where they may does not even qualify as Plan C, so Lane enlists the help of an accomplice, her friend John Sloan (Reginald Gardiner), a pompous ass who keeps proposing to her even though she has no interest in marrying him. She agrees to finally get hitched if only he’ll go along with her deception. The fact that he owns a farm in Connecticut is key, as well. He doesn’t have a baby, but they can always borrow one from a neighbor, right?

It should go without saying that Jones and Lane are attracted to each other, but their incipient romance is complicated by the fact that Lane is pretending to be married with a child. When the film first came out, the NY Times review said that “Peter Godfrey, the director, has a good deal to learn about the art of telling a boudoir joke in the parlor and getting away with it.” Modern viewers, however, will probably find most of the jokes fairly tame. Jones’s seeming willingness to cuckold Lane’s “husband” does reach a fever pitch toward the end, but nothing very lascivious comes of it.