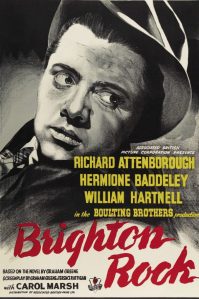 John Boulting’s Brighton Rock is an indelible portrait of evil. Richard Attenborough’s portrayal of 17-year-old gangster Pinkie Brown is one of the nastiest and coldest characterizations I’ve ever seen on film.

While Pinkie Brown’s crimes may pale in comparison with cinematic bogeymen like Hannibal Lecter — Pinkie is a garden-variety murderer, schemer, racketeer, and despoiler of women — Attenborough’s uncompromisingly nasty performance has no equal.

Brighton Rock is based on the novel by Graham Greene. It takes place during the interwar years in the seaside resort town of Brighton, home of the Brighton Racecourse, where Pinkie and his crew ply their protection racket.

Before seeing this film, my only image of Attenborough was as the middle-aged, pouchy-eyed RAF Squadron Leader of The Great Escape (1963) and as the grandfatherly CEO of Jurassic Park (1993). If I’d missed the credits, I never would have recognized him. He was 23 or 24 when he appeared in Brighton Rock, a little older than the 17-year-old hoodlum he was playing, but nevertheless he was perfectly cast.

Attenborough has the smooth, angelic face of a choirboy, but his eyes are cold and malevolent. Pinkie is a young man with no past and no future. There is no real explanation of how he came to be the way he is, and his homicidal impulses and poor planning guarantee that he is not long for this world.

The film begins with the choice Pinkie makes that will seal his downfall. It’s fitting that it’s a murder committed not out of necessity, but in retaliation for a perceived slight. Pinkie blames a newspaper writer named Fred Hale (Alan Wheatley) for the death of his gang’s leader, so when Hale is in Brighton for a day, Pinkie sets his sights on him.

After threatening Hale in a pub, Pinkie and his henchmen — the happy-go-lucky ne’er-do-well Cubitt (Nigel Stock) and the coldly efficient Dallow (William Hartnell) — pursue Hale through the throngs of summertime beachgoers in a pulse-pounding sequence. Pinkie finally corners Hale and murders him on a carnival ride.

It’s appropriate that it’s a fun-house ride to hell, with painted demons and cartoonish monsters flying toward the riders, since Pinkie is himself headed to hell, and Brighton Rock is the chronicle of his dissolution.

His murder of Hale piques the interest of Ida Arnold (Hermione Baddeley), a brassy music-hall singer who spent some time with Hale on the day of his death. However, Pinkie’s attempt to create an alibi for himself only creates a second possible witness — a shy waitress named Rose (Carol Marsh) — after Pinkie’s elderly henchman Spicer (Wylie Watson) bungles the job of trying to create a false trail for the police to follow.

Pinkie’s interest in Rose causes her to become deeply attached to Pinkie. She falls in love with him, even though she knows how wicked he is.

Pinkie’s evil is inextricably tied to his Catholicism. He’s not a psychopath who doesn’t understand the difference between right and wrong. His rejection of goodness is a conscious decision. As he tells Rose, “These atheists don’t know nothing. Of course there’s a hell, flames, damnations, torments.”

Pinkie knows he is damned. He just doesn’t care.

Rose is his diametrical opposite. Modern viewers might have trouble swallowing how deeply devoted Rose is to Pinkie, despite his clear disdain of her, but her love of Pinkie is a mirror of her devotion to God. It’s the kind of devotion that asks nothing in return.

When Pinkie tries to convince her they should enter into a suicide pact (which he calls a “suicide pax” — as a Catholic he knows that “pax” means “peace”), she weepingly protests that it’s a mortal sin. He responds, “Just one more.”

If you care for the character of Rose, Brighton Rock can be a difficult film to watch. While the ending of the film is an ironic demonstration of “the appalling strangeness of the mercy of God,” watching Pinkie systematically attempt to destroy such a simple, sweet-natured young woman is appalling.

On the other hand, it’s his unblinking awfulness that makes Brighton Rock such a powerful film. Most film villains have something that makes them likable or fun to watch — a sardonic sense of humor, a glimmer of goodness, a tragic origin story. Pinkie has none of these things. He is a nasty piece of work, through and through.