Before we dive into all the fine (and not so fine) films released in 1946, let’s take a moment to appreciate some of the best offerings of 1945. This list is limited to the films from 1945 I was able to see, and like all top 10 lists, it’s completely subjective.

Edgar G. Ulmer’s Detour is one of the most brilliant film noirs ever made. It’s phenomenal that such a finely crafted film was produced in just six days, and mostly in two locations. Shot through with a nightmarish sense of uncertainty and doom, it has an eerie and hypnotic power that can’t be fully explained.

I have to side with the Academy on this one. Billy Wilder’s The Lost Weekend is one of the most powerful tales of addiction ever put on the screen, and Ray Milland’s performance is still one of the most realistic and maddening portraits of alcoholism I’ve ever seen. Its Oscar wins (for best picture, actor, and director) were well-deserved.

Alfred Hitchcock’s Spellbound is a finely crafted and enjoyably loony psychological thriller anchored by fine performances from Ingrid Bergman and Gregory Peck, as well as George Barnes’s gorgeous cinematography and Miklós Rózsa’s memorable score. Hitchcock was reportedly less than thrilled with the final product, but I thought it was a top-notch mix of romance and suspense.

Michael Curtiz’s adaptation of James M. Cain’s novel Mildred Pierce is a fantastic mixture of film noir and melodrama. Joan Crawford brings not only her finely controlled histrionics to the role of Mildred, but her own life history as a woman who crawled up from nothing.

A moving romantic drama starring Joseph Cotten as a shell-shocked serviceman on leave and Ginger Rogers as a prisoner on a furlough. It beautifully depicts a fragile, growing romance between two likable people who each have something they try to hide from the other.

The full title of this film, directed by William A. Wellman, is Ernie Pyle’s “Story of G.I. Joe.” A well-acted, emotional war movie, it focuses on newspaperman Pyle (Burgess Meredith) as much as it does its cast of ragged but determined infantrymen, in particular Robert Mitchum as Lt. (later Capt.) Bill Walker and Freddie Steele as Sgt. Steve Warnicki.

Written, produced, and directed by Michael Powell and Emeric Pressburger, I Know Where I’m Going is a playful film with touches of magical realism. “The Archers” (Powell and Pressburger) show remarkable attention to detail in their depiction of an island in Scotland, and the lead performances by Wendy Hiller and Roger Livesey are warm and nuanced.

Director Mark Robson’s film, which was produced by legendary horror filmmaker Val Lewton, is a meditation on the abuse of power. Boris Karloff’s performance as a cold and brutal general in the Greek army who quarantines an island with the use of military force is fascinating and terrifying in equal measures.

There’s a scene in Edward Dmytryk’s Murder My Sweet (1944) in which Dick Powell’s drug-induced confusion is telegraphed to the audience by a web of gauze superimposed over the frame. Dmytryk uses no tricks like that to aid his star’s performance in his second outing with Powell, who delivers a hard-boiled and grim performance in Cornered, which is a really solid little thriller. 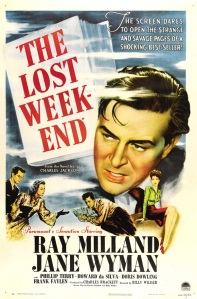 In the decades since Billy Wilder made The Lost Weekend, an entire vocabulary about alcoholism has entered the national consciousness through self-help books, 12-step programs, and daytime talk shows, such as “codependency,” “enabler,” “denial,” “intervention,” “addiction,” “recovery,” and “relapse.” None of these terms are heard in The Lost Weekend, but the film depicts the concepts they represent with grim thoroughness. (At the time of the film’s release, even the widespread understanding of the term “alcoholic” was fairly new, since Alcoholics Anonymous was founded in 1935.)

Don Birnam (Ray Milland) is a handsome, intelligent, and charming man who shares an apartment in Manhattan with his brother Wick (Phillip Terry). After receiving praise for his short stories during his time at Cornell University, Don dropped out before graduation and moved to New York to pursue his dreams of becoming a famous and respected author. Now in his 30s, Don has finished nothing and published nothing in all his time in New York. He has no money and no prospects. He survives on handouts from his brother, and he is an alcoholic.

As the film begins, he has supposedly abstained from drinking for several weeks, and is packing for a long weekend in the country with Wick. What his brother and his long-suffering girlfriend, Helen St. James (Jane Wyman), don’t know is that he has a bottle of cheap rye cleverly hidden. It’s hanging out his bedroom window on a string. Wick and Helen are optimistic about Don’s progress, but like so many people who love alcoholics, they are deluding themselves. Although perhaps only partly. When Helen says, “You’re trying not to drink, and I’m trying not to love you,” it encapsulates years of sadness and betrayal. In preparation for the getaway, Helen brings Don a care package with a new James Thurber novel, two Agatha Christie books, cigarettes, and chewing gum. Don is irritable and evasive, however. When Wick talks about looking forward to apple cider in the country, Don snaps, “Why this emphasis on liquids? Very dull liquids?” Wick eventually discovers the bottle of rye hanging out the window and pours it out. Don weasels out of the situation by claiming it was something he hid weeks ago, during a binge, and forget about. He then convinces Wick and Helen to go to the symphony without him, telling them he just needs a few hours to clear his head before they catch their train.

His denials and his lies are classic alcoholic behavior, and it comes as no surprise when, as soon as they leave, he turns over the apartment looking for money and anyplace he might have hidden liquor and forgotten about. He finds $10 intended for the cleaning lady and goes to the liquor store to buy two bottles of rye. The proprietor (Eddie Laughton) initially refuses to sell them to him, but it doesn’t take long for him to cave in.

“Your brother was in,” he says. “He said he’s not gonna pay for you anymore. That was the last time.”
“Two bottles of rye!” Don says, showing his money.
“What brand?”
“You know what brand, Mr. Brophy, the cheapest. None of that twelve-year-old aged-in-the-wood chichi. Not for me. Liquor’s all one anyway.”
“You want a bag?”
“Yes I want a bag.”
“Your brother said not to sell you anything even if you did have the money to pay for it, but I can’t stop anybody, can I? Not unless you’re a minor.”
“I’m not a minor, Mr. Brophy. And just to ease your conscience, I’m buying this to refill my cigarette lighter.”

Milland’s performance as an alcoholic is masterful. Before The Lost Weekend drunks in Hollywood movies were all bums on skid row or comical, hiccupping buffoons who saw pink elephants. No matter how drunk Birnam gets, he never slurs his words. He simply becomes more grandiose and irrational, and more desperate to keep drinking. After he hides his booze at home, he stops in at Nat’s Bar for a few shots before the weekend. After Nat (Howard Da Silva) pours him his first glass of rye, he moves to wipe up the bar.

“Don’t wipe it away, Nat,” he says. “Let me have my little vicious circle. You know, the circle is the perfect geometric figure. No end, no beginning. What time is it?”
“Quarter of four.”
“Good! We have the whole afternoon together. Will you let me know when it’s a quarter of six? It’s very important. I’m going to the country for a weekend with my brother.”

Don then delivers a monologue about his plan to smuggle rye on his weekend. He plans to hide one bottle in a copy of The Saturday Evening Post, so his brother can discover it, which will set his mind at ease. The other will be hidden in his brother’s luggage, and Don will retrieve it and hide it in an old apple tree. He doesn’t need it, he says, he just needs to know that it’s there if he needs it. When the scene ends, Don lifts a glass to his lips, and the camera shows that there are five “vicious circles” in front of him; five rings of booze on the surface of the bar.

Back at home, Wick and Helen give up on waiting for Don to arrive, and Wick leaves without him. Helen pleads with him and defends Don. “He’s a sick person,” she says. “It’s as though there were something wrong with his heart or his lungs. You wouldn’t walk out on him if he had an attack. He needs our help!” But both of them–the two people in the world who really care about Don–are at the ends of their ropes.

The rest of the film alternates between Don’s nightmarish bender that eventually finds him in the alcoholic ward of a hospital with no memory of how he got there, and flashbacks to his corrosive relationships with Helen and his brother. We see Wick make excuses for Don and even lie for him, and we see Helen fall in love with Don, lie to herself about the depth of his problem, and struggle to help him. “But there must be a reason you drink, Don,” she says. “The right doctor could find it!” “The reason is me,” he responds. “What I am. Or rather, What I’m not. What I wanted to become, and didn’t.”

Wilder does not depict Don’s descent into delirium in a purely subjective fashion, but there are a lot of brilliant little moments in the film that put us inside Don’s head. The extreme close-up on Don’s eye as it slowly opens while a phone rings in the background will strike a chord with anyone who’s ever had a crippling hangover, and Miklós Rózsa’s brilliant score, which incorporates haunting melodies played on a Theremin, mirrors Don’s altered mental states. The Theremin would become ubiquitous in science fiction films in the ’50s, but in 1945, most Americans had never heard the instrument before, and it must have sounded incredibly eerie. The rubber bat that Don imagines he sees in his apartment is less effective, however.

But The Lost Weekend is still a brilliant film, and remains one of the most honest portrayals of addiction ever put on film. When I first saw it years ago, I thought it had a happy ending. Watching it now, I’m not so sure. Don’s promise to stop drinking and finish his novel could just be one more lie; one that the audience itself wants to believe because the alternative is unbearable, that Don’s life is the vicious circle he referred to in Nat’s Bar, and that there is no hope for him. After all, Charles R. Jackson, whose semi-autobiographical novel was the basis for this film, did eventually commit suicide.