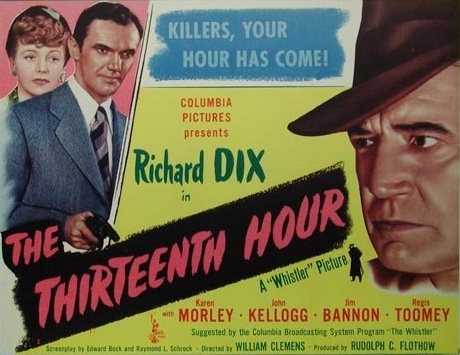 His role in William Clemens’s The Thirteenth Hour was his last. Dix’s health was in decline when he was starring in the series of B movies based on the radio show The Whistler. After appearing in The Thirteenth Hour, the seventh in the series, Dix retired from acting. He died a couple of years later, at the age of 56, on September 20, 1949, following a heart attack he’d suffered a week earlier. (There would be one last Whistler movie, The Return of the Whistler, in 1948, starring Michael Duane.)

When asked about his role in The Thirteenth Hour, Dix said, “The part is more dramatic than the ones I used to do at Goldwyn’s and Paramount. Then, I played devil-may-care, brassy boys who were strong on wisecracks, and back in some of those early films I made the jokes via printed titles.”

His mention of printed titles is a reference to his early days in Hollywood, when the movies were still silent. Dix had a 30 year-long career, and was one of the first “he-men” of the silver screen; a rugged, square-jawed presence who loomed larger than life. His Whistler films aren’t the best of his career, but they’re nothing to be ashamed of, either. Unlike most of the formulaic, single-character mystery series of the ’40s (e.g., Boston Blackie, the Falcon, the Crime Doctor, Charlie Chan), Dix played a different role in each Whistler film, from the nastiest bad guys to the most well-intentioned good guys.

In The Thirteenth Hour, he plays a regular Joe named Steve Reynolds, a truck driver who operates his own trucking firm. He’s engaged to a roadhouse waitress named Eileen (Karen Morley), who has a young son named Tommy (Mark Dennis).

After a hot-rodding drunk runs Steve off the road one night and straight into an old man’s gas station, his license is revoked for six months. The accident wasn’t Steve’s fault, but a disappearing witness and a motorcycle cop named Don Parker (Regis Toomey), who has a vendetta against Steve, conspire against him.

To make matters worse, Steve has a competitor, Jerry Mason (Jim Bannon), an underworld character who’s undercutting Steve and is determined to run him out of business.

Finally, the night comes when Steve’s mechanic and driver Charlie (John Kellogg) is too sick to work, and Steve has no choice but to deliver a shipment himself. His license hasn’t been reinstated yet, so the decision could have terrible consequences. He starts out in the wee hours of the morning and sticks to back roads, but of course, something goes wrong. When he stops to service his truck, he’s knocked out by a masked man. The mysterious figure not only absconds with Steve’s truck, but he uses it to run over and kill a cop.

Steve goes on the lam and attempts to prove his innocence with the help of Charlie, Eileen, and Tommy. (There’s one weird, funny moment when the cops bust in on Eileen and Tommy right after Steve has slipped out the back. Tommy sits in a living room chair, looking innocent, reading a book. The detective peers at him suspiciously, and the camera zooms in on the book’s title — Studies in Necrophobia.)

If you’ve awake for most of the movie, you’ll have no trouble figuring out exactly who the killer is before Steve finds out. Even so, The Thirteenth Hour is a well-made, brisk mystery that packs plenty of excitement into its barely one-hour running time. The presence of the Whistler (an uncredited Otto Forrest) is less obtrusive than in some of the series’ entries, but he still sets the stage nicely, just as he did on his weekly radio show, which told the stories of “men and women who have stepped into the shadows.”