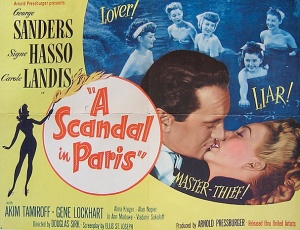 This early film by renowned director Douglas Sirk is based on the life of Eugène François Vidocq, who was the founder of the Sûreté Nationale police force, and is generally regarded as the world’s first private detective. What makes Vidocq fascinating is that he became a crime-fighter only after a fairly lengthy career as a criminal.

Sirk’s film is only very loosely based on Vidocq’s ghost-written memoirs. Vidocq was the father of modern criminology. He is credited with the introduction of modern police methodology and record-keeping, as well as things we now take for granted, such as undercover work, ballistics, and plaster casts of footprints, but you won’t see much of this in A Scandal in Paris (which was also released under the title Thieves’ Holiday). It’s a lighthearted and romantic picaresque adventure in which the focus is firmly on Vidocq’s career as a rake and a rapscallion. The closest he comes to doing any actual police work is when he goes to elaborate and clever lengths to pin his crimes on a romantic rival.

In the world of the film, Vidocq was born in 1775, and came from a poor, honest family, “a little poorer than honest,” he says in voiceover. His mother stole a loaf of bread every time she went into labor in order to give birth in the only shelter available to her — prison. Vidocq claims his mother stole 11 loaves of bread and gave birth to 11 children. He spent the first 30 years of his life engaged in all matter of villainy, and used many surnames, since his father’s name was unknown.

Except for the year of his birth, none of the specifics match the official record, but George Sanders, who plays Vidocq, is such a smooth and engaging performer that I didn’t really care. When he breaks out of prison on his birthday with a file baked into a cake brought to him by the jailer’s daughter, he does so in the best tradition of cinematic Lotharios who can’t utter a true statement to save their lives, but whom you just can’t help but like.

Douglas Sirk was born “Hans Detlef Sierck” in Germany to Danish parents. He grew up in Denmark, but moved to Germany as a teenager. By 1942, he had emigrated to the United States, and was directing the stridently anti-Nazi film Hitler’s Madman (1943), which was made for the Poverty Row studio P.R.C., but was bought and distributed by the prestigious M-G-M. He directed nearly 50 films in Danish, German, and English, but today his reputation rests mainly on the lush melodramas he made in the ’50s, such as All That Heaven Allows (1955), Written on the Wind (1956), and Imitation of Life (1959).

A Scandal in Paris hasn’t gone down in history as a masterpiece, but it’s a pretty good film; light and fluffy, but always visually arresting and with plenty of sly humor. For instance, when we’re told two years have passed while he served in the army, Sanders as Vidocq says that this period of his life was omitted “Out of concern for ‘censorship (military).'”

There are a number of interesting motifs running through the film, too. One of these is the English myth of St. George and the dragon. After Vidocq and his cellmate Emile (Akim Tamiroff) escape from prison, they pose for a painting as St. George and the dragon, respectively, before escaping on horseback, still in costume. The painting of them will later show up on a wall of the estate owned by Marquise de Pierremont (Alma Kruger) and Houdon de Pierremont (Alan Napier), the minister of police. Their daughter, Therese de Pierremont (Signe Hasso) falls in love with Vidocq’s image. When she meets him in the flesh, he rides to the rescue of a bunch of bathing beauties (see the poster above) who are terrified by a snake slithering along the banks of a river. Vidocq rides by, and like St. George, kills the serpent. He does so with a nonchalant lash of his riding quirt, not a lance, but the effect is the same. Therese swoons.

The scene is played lightly, as is everything else in the picture. Throughout, Sirk seems to be mocking traditional notions of heroism. Sanders is the perfect actor for the role. He never winks at the camera, but there always seems to be a joke that only he is in on. Lines like, “In crime, as in love, there are only those who do, and those who don’t dare,” could have been awfully clunky coming out of another actor’s mouth, but Sanders’s delivery is perfect.