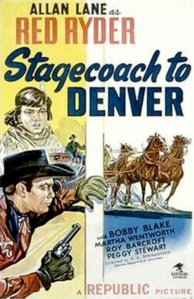 The one-hour oater takes place in a town called Elkhorn (which may or may not be in Colorado). As usual, Ryder and his aunt, the Duchess (Martha Wentworth), moved around plenty — most likely to keep the series’ titles fresh. This time around, the Duchess is running a stage line that serves all points south of Elkhorn, and her friend Big Bill Lambert (Roy Barcroft) is starting up a stage line that will serve all points north.

A little boy named Dickie (Bobby Hyatt), who has lost his parents, is getting shipped out to a relative he doesn’t know in Denver. This was the old days, when an orphan was simply told his parents “Went away on a long trip,” not that they were dead.

Dickie is caught up in the middle of nefarious doings when the sabotaged yoke of a stagecoach breaks, plunging him and the rest of the passengers into a ravine. The scheme was carried out to kill the land commissioner, who wouldn’t play ball with evil land baron Jasper Braydon (Wheaton Chambers).

Everyone on the stage dies except for Dickie, who is paralyzed from the waist down. “Doc” Kimball (Tom Chatterton) tells Ryder that he needs permission from Dickie’s nearest living relative to perform an operation that could repair his spine, but that could also kill him.

The bad guys intercept the stage carrying Dickie’s Aunt May, bind and gag her in a cabin in the woods, and replace her with a beautiful ringer (Peggy Stewart).

The fake Aunt May gives her assent, but struggles with her decision. If the boy dies, she feels it will be her fault, and she wants out of the scheme.

Meanwhile, Braydon, the evil land boss, starts forcing folks off their land in a dramatic and harrowing montage of stock footage.

Will Dickie walk again? Will he get the pony Ryder and his Indian boy sidekick Little Beaver (Bobby Blake) promised him? Will the beautiful young woman masquerading as Aunt May have a change of heart and aid the good guys? Will Emmett Lynn provide his usual brand of cornpone comic relief, this time as a character named “Coonskin”? Will Big Bill Lambert turn out to be one of the bad guys and have a furniture-destroying fistfight with Red Ryder? You’ll just have to watch it and find out.

Stagecoach to Denver is directed by dependable Republic journeyman R.G. Springsteen with his usual blend of vigor and indifference. 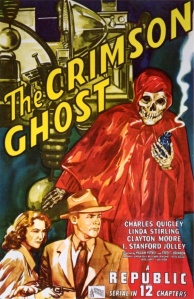 The Republic serial The Crimson Ghost, directed by William Witney and Fred C. Brannon, features one of the most iconic cliffhanger villains of all time. His grinning skull mask was appropriated by the band The Misfits, and may be how the character is best known today, since his face appears on nearly all of their T-shirts and album covers.

The Crimson Ghost’s mask is also the most memorable and sinister part of him in the serial itself. He gets involved with the action — gunplay, car chases, and fistfights — too often to be mysterious or ominous, and his hideouts are generally rustic or quaintly subterranean, but damn that mask is cool!

By 1946, most of Republic’s finest serials were behind them, but the studio still made the best cliffhangers in Hollywood, and The Crimson Ghost stands up as solid entertainment. It’s also one of the earliest examples of post-war, Atomic Age, pulp lunacy. Granted, the storytelling isn’t that different from pre-war Republic serials, but The Crimson Ghost does contain a number of science-fiction elements, and some of the fear and paranoia that came from living in a world with atomic weapons was beginning to creep in.

Charles Quigley plays scientific criminologist and “outstanding physicist” Duncan Richards and Linda Stirling plays his lovely and plucky assistant, Diana Farnsworth. In the first chapter of the serial, “Atomic Peril,” Prof. Chambers (played by Republic mainstay Kenne Duncan, his hair dyed gray and playing against type as a good guy) demonstrates his invention, the “cyclotrode.” The cyclotrode is roughly the size of a bread box, with a rotating cylindrical metal coil on top. It can “repel any atomic bomb attack” by shorting out electric systems, a stunning display of which is shown when Dr. Richards pilots a little model of a B-29 and Prof. Chambers locates it somehow with the cyclotrode and shoots it out of the sky. After the demonstration is over, one of the observing scientists says, “I haven’t felt so safe since before the bomb fell on Hiroshima.”

Prof. Chambers says that he plans to hand the cyclotrode over to the government and begin work on a larger model, but one of his fellow scientists is secretly masquerading as the Crimson Ghost (voiced by I. Stanford Jolley) and commanding a small army of henchmen in his spare time. One of the Ghost’s henchmen — disguised as a janitor — gets the drop on Prof. Chambers with the old “revolver in a feather duster” trick, but Prof. Chambers manages to destroy the prototype, and a small-scale, ridiculous little arms race is on. 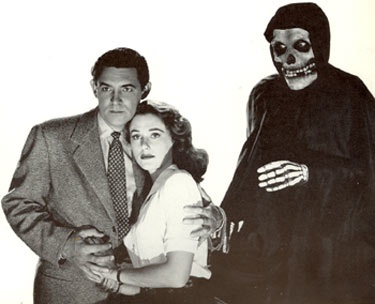 Republic Pictures always had the best fight stuntmen in the business, and the brawls in The Crimson Ghost are all really well-done. The first one is a doozy, with Quigley’s stunt double leaping over a conference table, later sliding down its length, and of course breaking lots of furniture along the way. The second fight features the most memorable stunt in the serial, when Quigley’s stunt double leaps up and kicks off of a wall to take down two assailants.

Over the course of The Crimson Ghost, Dr. Richards and Diana constantly cross paths and mix it up with the black-robed baddie and his right-hand man, the suit and fedora-wearing Ash (played by Clayton Moore, who is best known to legions of baby boomers as the Lone Ranger). Like all serials, the plot is massaged, kneaded, and stretched out to fill 12 chapters. There are plenty of fistfights and car chases — the bread and butter of chapter plays — but there are also plenty of nutty pseudoscientific contraptions like the Crimson Ghost’s “slave collars,” which are outfitted with small diaphragm radio receivers that allow the Ghost to order the wearer around like his own personal zombie; the collars also explode when removed, killing the unlucky victim.

It quickly becomes clear that the Ghost is really one of the professors with whom Dr. Richards regularly meets, so why he keeps telling them his plans is beyond me, but it makes for plenty of action when Ash and his henchmen show up every time Dr. Richards and Diana attempt to secure an “X-7 transformer tube” (which Richards explains is “a special radium vapor tube we’ve been developing for a death ray machine”) or procure the heavy water necessary to supply the cyclotrode’s tubes.

There are plenty of cool gadgets, like a transcription disc sent to Dr. Richards that carries a message from the Crimson Ghost that ends with a release of poisonous gas, radioactive tracking devices, dissolving sprays, and a cigarette case that releases a tiny puff of knockout gas.

The Crimson Ghost was one of three serials I watched repeatedly in high school (The Adventures of Captain Marvel and Spy Smasher were the other two). I loved Linda Stirling as Diana, whom Dr. Richards treats like a secretary even though she can pilot a plane, mix it up with Ash, and even throw her little body out of a speeding car and remarkably not have any scratches or bruises on her face. Watching it again made me realize that she’s a really bad actress, even by the standards of Republic Pictures, but her ineptitude as a thespian didn’t change the way I feel about her, or about The Crimson Ghost, which is a top-notch serial with plenty of rewatchability. 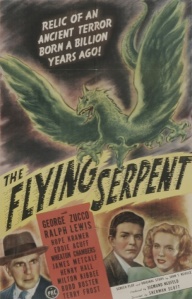 George Zucco was born in 1886 in Manchester, England. He appeared in nearly 100 movies during his 20-year career. He was a fine actor, but he appeared in a lot of bad movies. Case in point: The Flying Serpent, which was directed by prolific schlockmeister Sam Newfield under the pseudonym “Sherman Scott.”

Like White Pongo (1945) — the last steaming pile of celluloid by Newfield that I saw — The Flying Serpent begins with an onscreen prologue that raises more questions than it answers. The viewer is told that the “wiley [sic] Emperor Montezuma,” in order to outsmart Cortez, hid his treasure somewhere far to the north of San Juan, New Mexico, where the Aztec ruins are located, and implored his guards to protect it.

I’m pretty sure none of that is true. And I’m pretty sure the filmmakers are confusing San Juan County in New Mexico, where the Aztec Ruins National Monument is located, with the town of San Juan, which is in a neighboring county. I’m also pretty sure they either didn’t know or didn’t care that the name of this national monument is a misnomer, since the ruins are actually ancestral Pueblo structures, and have nothing to do with the Aztecs. But I digress.

Before you can ask how anyone sent by Montezuma to protect treasure 500 years ago could still be around to fulfill his duty, enter Quetzalcoatl, the feathered serpent. First seen in the shadows (or possibly just the murk of the lousy print used for the public domain DVD I watched), Quetzalcoatl is a puppet of indeterminate size locked safely behind iron bars in a secret mountain lair attended to by the archaeologist Dr. Andrew Forbes (Zucco). When Dr. Forbes pulls a lever, the stone roof of the cage opens, and the flying serpent takes wing. In flight, with nothing to give the puppet a sense of scale, it looks a little like the giant flying monster in the Japanese film Rodan (1956).

The only other appearance of Quetzalcoatl on film I can think of right now is Larry Cohen’s B movie classic Q (1982), in which the enormous Mesoamerican deity terrorizes Manhattan. Unlike Rodan or Q, however, the monster in The Flying Serpent turns out to be ridiculously small once it appears in the same frame as a human. When it lands on its first victim, Dr. John Lambert (James Metcalf), it looks as if he’s being attacked by a feathered Labrador Retriever with wings.

The Flying Serpent isn’t nearly as bad a film as White Pongo, but it never quite reaches the level of craziness I demand from an entertaining bad B movie. Zucco is always entertaining to watch, though, no matter how far down in the gutter he’s slumming.