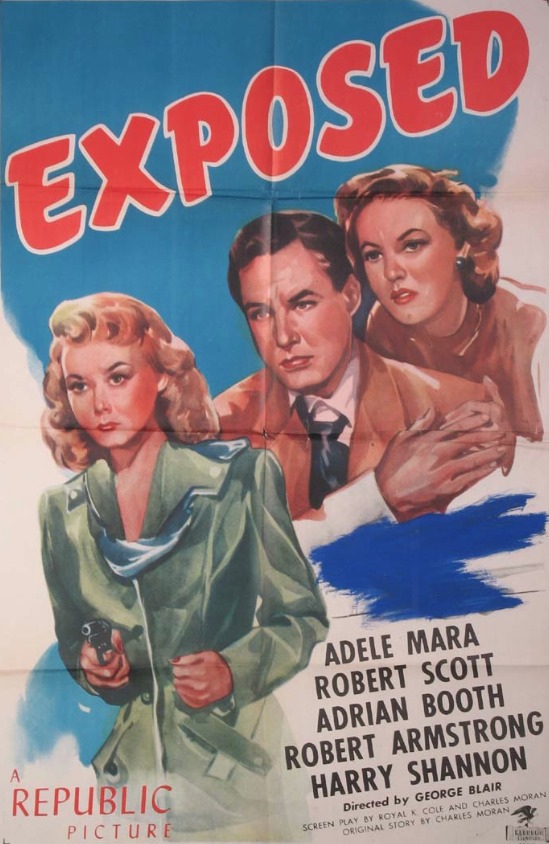 I wish that George Blair’s Exposed was a better movie, because it’s got a great setup. It’s one of those rare movies from the 1940s — like Crane Wilbur’s The Story of Molly X (1949) — that features a woman in a traditionally masculine role. In Molly X it was June Havoc as the leader of a heist crew (and later tough gal behind bars). In Exposed it’s cute-as-a-button Adela Mara as Los Angeles private eye Belinda Prentice.

Prentice is a stylishly dressed young woman who eats in the best restaurants and drives a Lincoln Continental Convertible. She has an office with marble walls and blond wood furniture. The door to her office has “B. Prentice” stenciled on pebbled glass. Her fee is $75 a day plus expenses.

When a dignified gentleman, Col. Bentry (Russell Hicks), who is looking to engage the services of a private investigator is surprised to discover that B. Prentice is a woman, she responds, “You were expecting maybe Senator Claghorn?”

Prentice is full of quips like that. When a tough little gunsel named “Chicago” (Bob Steele) sits down at her table at the Deauville Restaurant and places his fedora down with a gun under it, she says, “Take your hat off the table. I’m allergic to dandruff.”

When a waitress at a cocktail lounge warns Prentice that the man she wants to talk to is a bad egg, she responds, “Don’t worry, I’ll scramble him.”

Her dialogue may be hard-boiled, but she always comes off as cute and impish, not like a bull dagger who talks out of the side of her mouth. She achieves this by backing up all of her wiseacre comments not with her fists or a pistol, but with her assistant, a hulking ex-Marine named Iggy (William Haade).

Like I said, Exposed has a great setup. The problem is its execution.

Exposed was a B feature from Republic Pictures, but it’s top-heavy with plot, which is tough to handle with a running time of only 59 minutes. Consequently, the dialogue is nearly all exposition. The shooting schedule was obviously tight, allowing for a limited number of takes, which results in the actors all being stiff, reciting their lines without flubbing any of them, but without injecting much life into them either. (Compare, for instance Bob Steele’s performance as a gunman in this film with his similar role in Howard Hawks’s The Big Sleep.)

The plot, in a nutshell, is that Col. Bentry’s stepson, William Foresman III (Mark Roberts), has been making very large withdrawals from the family business without telling anyone. The bluenosed Col. Bentry doesn’t want to ask him anything directly because he doesn’t want to seem like he’s prying.

So he employs the services of Belinda Prentice. But by the time she arrives at the Bentry estate, Col. Bentry is dead, seemingly stabbed with a letter opener. But there’s very little blood. Could it have been a heart attack — or poison — that caused him to collapse on the letter opener? The police are called in, including Inspector Prentice (Robert Armstrong), who’s Brenda’s father.

William Foresman III seems like a nice enough young man, but that never ruled anyone out as a suspect in a murder mystery. There are also all number of creeps crawling around in the woodwork, including Prof. Ordson (Paul E. Burns), Bentry’s physician, who’s working on a chemical cure for alcoholism.

If you can overlook the stilted dialogue and the overly involved mystery, Exposed is a fun second feature. Bob Steele’s fight scene with the much-larger William Haade is pretty good, and the film’s unpretentious shooting style is a great way to see what Los Angeles looked like circa 1947. 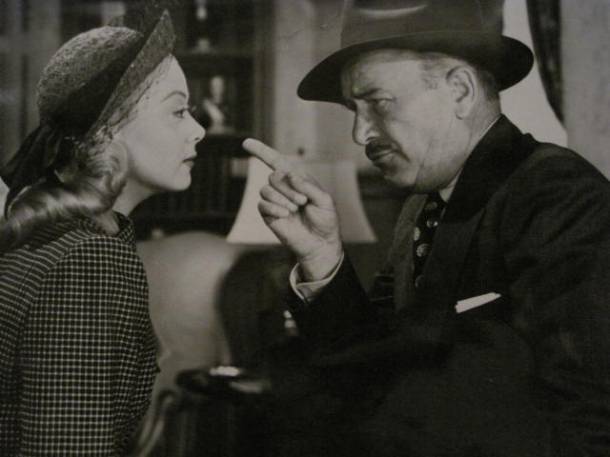 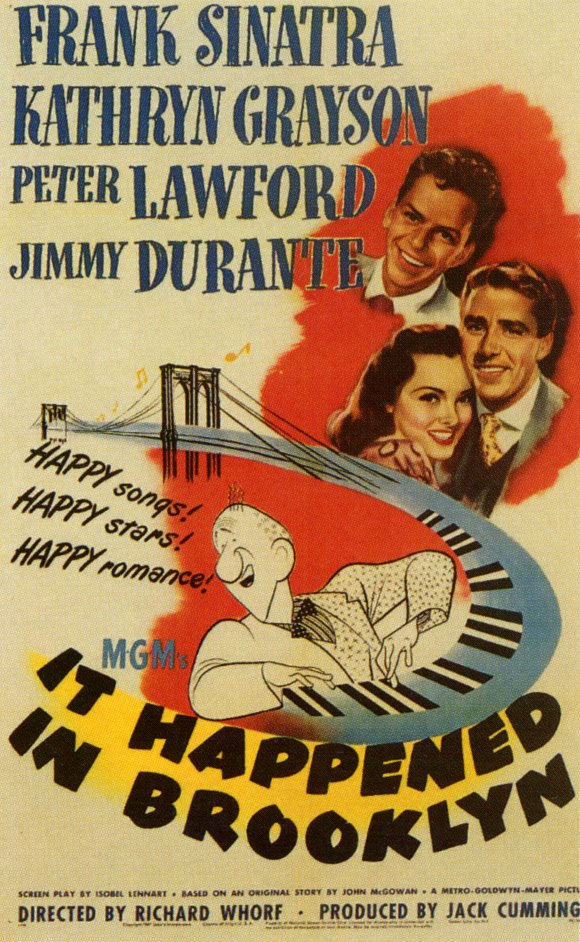 I used to be bummed out that I grew up after the era of listening booths in record stores.

After seeing Richard Whorf’s It Happened in Brooklyn, I’ve realized that as far as regrets go, that’s small potatoes. If this film is to be believed, there was once a music store in Bay Ridge where you could pick out any piece of sheet music and hand it to Frank Sinatra, the in-house “song demonstrator,” and listen to Ol’ Blue Eyes tickle the ivories while he performed it for you. Sure, you had to contend with a teeming crowd of sighing bobby-soxers, but that’s a small price to pay.

When It Happened in Brooklyn begins, Private Danny Miller (Sinatra) has been in the service for four years. World War II is drawing to a close, and he can’t wait to get home to his one true love, Brooklyn.

Danny loves Brooklyn so much that he carries a picture of the Brooklyn Bridge in his wallet. When a pretty Army nurse (Gloria Grahame) from Brooklyn refuses to believe that Danny is really from Brooklyn because he’s so restrained and cool, he pulls out the picture of the bridge and says, “Sure, that’s my pinup girl. Ain’t she a beauty?”

When Danny returns home, a traffic cop asks him why he’s so happy to be in Brooklyn when he could be across the river in New York. Danny looks incredulous and exclaims, “New York? That’s a place to look at Brooklyn from!”

Faced with the post-war housing shortage, Danny moves in with Nick Lombardi (Jimmy Durante), the janitor at New Utrecht High School, Danny’s alma mater. Nick is a kindly old geezer who idolizes the fictional teacher Mr. Chips, and doesn’t understand why all the kids in the school make fun of him. 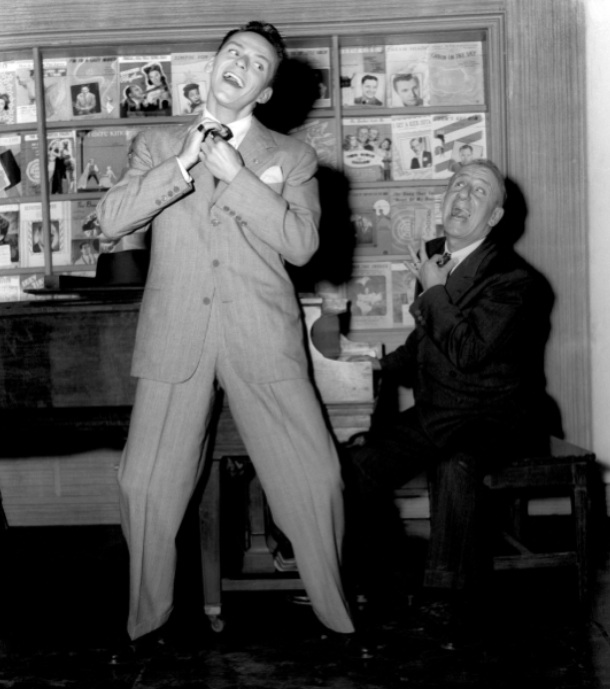 Despite this, It Happened in Brooklyn is still a blast, especially if you’re a Sinatra fan. It’s packed with great songs by Sammy Cahn and Jule Styne, including “The Brooklyn Bridge,” “Whose Baby Are You?,” “It’s the Same Old Dream,” “The Song’s Gotta Come From the Heart,” and the classic “Time After Time.” I especially enjoyed Sinatra and Durante’s humorous performance of “I Believe” with a teenaged actor named Bobby Long, who does a great tap number. Does anyone know anything about Long? Why didn’t he ever appear in another movie? Did he have an abrasive personality? Horrible skin? Did he sleep with a producer’s wife after wooing her with his sensuous tap-dancing?

Along with all the great pop numbers, there’s a little “class” squeezed in, too. The classically trained Grayson gets to belt out a couple of operatic numbers — one from Mozart’s Don Giovanni and one from Delibes’s Lakmé — and her student Leo Kardos (Billy Roy) performs a piano concert in hopes of getting a scholarship. (Kardos’s playing was actually done by André Previn, who had just joined the music department of MGM at the age of 17.)

It Happened in Brooklyn is clichéd and occasionally silly, and it doesn’t offer the over-the-top razzle-dazzle of Anchors Aweigh, but it’s still a whole lot of fun.