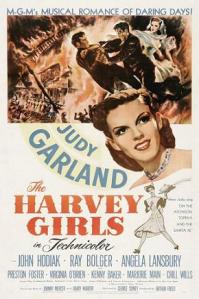 In 1876, a 41-year-old entrepreneur named Fred Harvey opened a string of restaurants along the Atchison, Topeka, and Santa Fe Railway line. The eateries catered to middle-class and wealthy travelers alike, and at the height of the franchise’s success, there were more than 80 Harvey House restaurants. Harvey died in 1901, but the Fred Harvey Company continued to build restaurants into the 1960s.

A restaurant chain might seem an unlikely subject for a big-budget, Technicolor, Hollywood musical, but clearly the young, attractive waitresses in their crisp black and white uniforms were enough of a hook. The film opens with the following portentous prologue:

“When Fred Harvey pushed his chain of restaurants farther and farther west along the lengthening tracks of the Santa Fe, he brought with him one of the first civilizing forces this land had known … the Harvey Girls. These winsome waitresses conquered the west as surely as the Davy Crocketts and the Kit Carsons — not with powder horn and rifle, but with a beefsteak and a cup of coffee. To these unsung pioneers, whose successors today still carry on in the same tradition, we sincerely dedicate this motion picture.”

If all this is to be taken seriously, then who wouldn’t want to lionize these distaff settlers? I haven’t read Samuel Hopkins Adams’s 1942 novel that this film is based on, but it must have been a good story for Hollywood to want to pick it up. Or maybe it was just that Johnny Mercer and Harry Warren realized what a catchy rhythm the phrase “on the Atchison, Topeka, and the Santa Fe” had.

After the prologue and credits, the film opens on a shot of a moving train. Susan Bradley (Garland) is standing on the deck of the caboose, singing a forgettable song about love. She is heading out west to marry a man whom she only knows from the florid love letters he has written her. When her suitor, H.H. Hartsey (Chill Wills), turns out to be a functionally illiterate cowpoke who had a friend play Cyrano for him by penning the letters himself, Susan parts with him (mostly amicably), and becomes a Harvey girl.

The dramatic conflict, such as it is, comes from the local saloon and gambling house, which also features dancing girls. The owner of the palace of sin, Ned Trent (John Hodiak), and his star attraction, Em (played by a young and foxy Angela Lansbury), fear that the opening of the Harvey House will usher in a new era of respectability and crush their business. In real life of course, Trent’s girls would have been prostitutes and Em would have been their madam, but in the world of 1940s M-G-M musicals, dancing the cancan for hooting and hollering cowboys was about as scandalous as they could get.

Garland and Lansbury both give good performances, and are backed up by a large and talented cast. Virginia O’Brien (as the Harvey girl “Alma from Ohio”) is tough and sassy, and Ray Bolger, most famous for playing the Scarecrow in The Wizard of Oz (1939), here gets to play the Cowardly Homosexual, a popular character type in Hollywood pictures for decades. While his sexual preference is never identified outright, Bolger’s character’s effeminacy and fear of any butch labor (such as shoeing horses), as well as his spirited prancing, leaping, and tap dancing make it clear that he doesn’t have any designs on the ladies.

The Harvey Girls is an entertaining mix of musical and western. But if director George Sidney aspired for it to be anything more than breezy entertainment, it doesn’t show. Judy Garland is always a delight, but Vincente Minnelli’s ability to coax a nuanced performance from her and to tell an engaging story from beginning to end in a musical is sorely missed here. The Harvey Girls is enjoyable, but it’s no Meet Me in St. Louis (1944). Also, aside from the standout song, “On the Atchison, Topeka, and the Santa Fe” (which won an Academy Award for best song), no musical number in the picture really stands out.