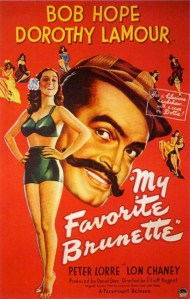 Elliott Nugent’s My Favorite Brunette begins with baby photographer Ronnie Jackson (Bob Hope) in the death house at San Quentin. Jackson is set to be executed that night, and he’s hoping for a stay from the governor. When none arrives, Jackson quips, “No word? Well, I’ll know who to vote for next time.”

Jackson takes a look into the chamber where he’s set to die. “Gas,” he scoffs. “You haven’t even put in electricity.”

Like any good film noir protagonist, Jackson gets to tell his story before he takes that last, long, lonely walk. (Of course, Jackson isn’t really a noir protagonist, since My Favorite Brunette is a spoof of hard-boiled detective movies, but he doesn’t know that.)

When Jackson’s story begins, he’s desperately trying to get an adorable little Chinese-American boy to smile for the camera, but he’s hungry for bigger problems. Jackson may be San Francisco’s premier baby photographer, but he idolizes the man who has the office across from him, two-fisted he-man Sam McCloud (an uncredited Alan Ladd, who’s clearly able to laugh at himself). Jackson longs to be a detective, too. “It only took brains, courage, and a gun,” Jackson says. “And I had the gun.”

When McCloud has to run off to Chicago for a few days, Jackson just happens to be sitting in his office when the beautiful and exotic Carlotta Montay (Dorothy Lamour) walks in. When she thinks he’s McCloud, he can’t bear to tell her the truth, and is off on his first case, tracking down Carlotta’s missing husband, the Baron Montay. (Or is he her uncle? The story keeps changing.)

I won’t summarize the plot any further, mostly because it’s beside the point, but also because it’s nearly as convoluted as an actual hard-boiled P.I. story. Also, some of Jackson’s hard-boiled narration is so close to the real thing that it’s remarkable. After he’s knocked out in his office, he says in voiceover, “When I came to, I was playing ‘post office’ with the floor. I had a lump on my head the size of my head. Inside, Toscanini was conducting the Anvil Chorus with real blacksmiths. I looked at the bottle of Old Piledriver and decided to stick to double malts.”

Sure, it’s over-the-top, but so was most of the dialogue in hard-boiled detective films. Threats like, “I’ll fill you so full of holes you’ll look like a fat clarinet,” sound funny when they’re coming out of Bob Hope’s mouth, but they’re no more ridiculous than half of the things Humphrey Bogart and Dick Powell growled at tough guys.

Besides the genuinely funny script and manic direction by Nugent, the casting is key to the success of My Favorite Brunette. Dorothy Lamour is attractive and sleepy-eyed enough to be a real femme fatale, and the hulking Lon Chaney Jr. and the sinister Peter Lorre are both on hand to play bad guys. (All that’s missing is Boris Karloff with an eye patch and a hook for a hand.)

I’m not the biggest fan of Bob Hope, but he’s excellent in this movie, and frequently had me in stitches. The comedy mostly comes from the dialogue, but there are some classic bits of physical humor, too. The scene in which Lorre tries to force a false clue on Hope while hiding in various spots in a room, but Hope just keeps missing it, might be the funniest bit in the film.

My Favorite Brunette has fallen into the public domain, and is available to watch at archive.org. You’ll have to wait until the very end for Bing Crosby’s cameo, but it’s worth it.

In 1876, a 41-year-old entrepreneur named Fred Harvey opened a string of restaurants along the Atchison, Topeka, and Santa Fe Railway line. The eateries catered to middle-class and wealthy travelers alike, and at the height of the franchise’s success, there were more than 80 Harvey House restaurants. Harvey died in 1901, but the Fred Harvey Company continued to build restaurants into the 1960s.

A restaurant chain might seem an unlikely subject for a big-budget, Technicolor, Hollywood musical, but clearly the young, attractive waitresses in their crisp black and white uniforms were enough of a hook. The film opens with the following portentous prologue:

“When Fred Harvey pushed his chain of restaurants farther and farther west along the lengthening tracks of the Santa Fe, he brought with him one of the first civilizing forces this land had known … the Harvey Girls. These winsome waitresses conquered the west as surely as the Davy Crocketts and the Kit Carsons — not with powder horn and rifle, but with a beefsteak and a cup of coffee. To these unsung pioneers, whose successors today still carry on in the same tradition, we sincerely dedicate this motion picture.”

If all this is to be taken seriously, then who wouldn’t want to lionize these distaff settlers? I haven’t read Samuel Hopkins Adams’s 1942 novel that this film is based on, but it must have been a good story for Hollywood to want to pick it up. Or maybe it was just that Johnny Mercer and Harry Warren realized what a catchy rhythm the phrase “on the Atchison, Topeka, and the Santa Fe” had.

After the prologue and credits, the film opens on a shot of a moving train. Susan Bradley (Garland) is standing on the deck of the caboose, singing a forgettable song about love. She is heading out west to marry a man whom she only knows from the florid love letters he has written her. When her suitor, H.H. Hartsey (Chill Wills), turns out to be a functionally illiterate cowpoke who had a friend play Cyrano for him by penning the letters himself, Susan parts with him (mostly amicably), and becomes a Harvey girl.

The dramatic conflict, such as it is, comes from the local saloon and gambling house, which also features dancing girls. The owner of the palace of sin, Ned Trent (John Hodiak), and his star attraction, Em (played by a young and foxy Angela Lansbury), fear that the opening of the Harvey House will usher in a new era of respectability and crush their business. In real life of course, Trent’s girls would have been prostitutes and Em would have been their madam, but in the world of 1940s M-G-M musicals, dancing the cancan for hooting and hollering cowboys was about as scandalous as they could get.

Garland and Lansbury both give good performances, and are backed up by a large and talented cast. Virginia O’Brien (as the Harvey girl “Alma from Ohio”) is tough and sassy, and Ray Bolger, most famous for playing the Scarecrow in The Wizard of Oz (1939), here gets to play the Cowardly Homosexual, a popular character type in Hollywood pictures for decades. While his sexual preference is never identified outright, Bolger’s character’s effeminacy and fear of any butch labor (such as shoeing horses), as well as his spirited prancing, leaping, and tap dancing make it clear that he doesn’t have any designs on the ladies.

The Harvey Girls is an entertaining mix of musical and western. But if director George Sidney aspired for it to be anything more than breezy entertainment, it doesn’t show. Judy Garland is always a delight, but Vincente Minnelli’s ability to coax a nuanced performance from her and to tell an engaging story from beginning to end in a musical is sorely missed here. The Harvey Girls is enjoyable, but it’s no Meet Me in St. Louis (1944). Also, aside from the standout song, “On the Atchison, Topeka, and the Santa Fe” (which won an Academy Award for best song), no musical number in the picture really stands out. 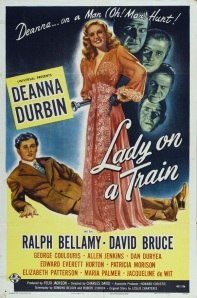 Deanna Durbin is an absolute delight in this farcical murder mystery. Durbin, a native of Winnipeg, Manitoba, was once one of the biggest stars in Hollywood, but never made a movie after 1948. (She currently lives in a small village in France, grants no interviews, and is reportedly very happy.) In Lady on a Train, she plays a young woman named Nicki Collins. When the film begins, Collins is sitting by herself in a compartment on a train entering New York on an elevated line. She has come from San Francisco to spend the holidays with her wealthy businessman father, and is currently engrossed in a mystery novel called The Case of the Headless Bride. When the train is briefly delayed, she looks out the window of her train car and witnesses a murder. Through a lighted window, she sees a young man beat an older man to death with a crowbar. She never sees the murderer’s face, however, and when she reports the murder to the police, the desk sergeant dismisses her report as the product of the overheated imagination of a girl who loves murder mysteries and can provide no real specifics of where she was when she saw the murder. Also, it’s Christmas Eve, and who want to traipse around looking for a murder that may or may not have occurred somewhere in Manhattan north of Grand Central Station?

Undeterred, Collins calls up Wayne Morgan (David Bruce), the author of the mystery novel she was reading, and insinuates herself into his life, much to Morgan’s fiancée’s chagrin. After interrupting Morgan on a date at the movies, Collins see the murder victim in a newsreel, and identifies him as Josiah Waring, a shipping magnate. She heads to the Waring estate, where she is mistaken for Circus Club singer Margo Martin, who was Waring’s girlfriend. This allows her to sit in on the reading of Waring’s will, which leaves $1 to his nephew Arnold (Dan Duryea), $1 to his nephew Jonathan (Ralph Bellamy), and the rest of his substantial fortune to Martin.

Sure enough, Collins discovers that Martin has been murdered, throwing suspicion on the Arnold nephews and putting her in a tight spot, since she’s now performing at the club as the murdered girl. 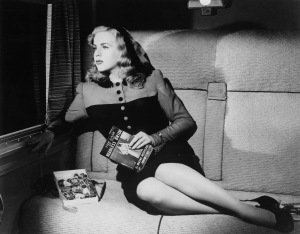 Lady on a Train is part mystery, part musical, part noir, part comedy, and part romance. The most surprising thing about this movie is that each element works perfectly, and they all complement one another. (Calling this film a noir is stretching it, but the final chase in a warehouse contains some striking chiaroscuro shot constructions, and is as tense as one could ask for.) Lady on a Train is also a delight for Durbin fetishists, since she has a different outfit and hairstyle in literally every scene. Sometimes the changes are subtle, but occasionally they’re impossible to miss, such as the scene in which she comes in out of the rain and is suddenly wearing gravity-defying, Pippi Longstocking-style braided pigtails.

Durbin made her film debut in Three Smart Girls (1936) at the age of 14. Apparently she was so popular that she singlehandedly saved Universal Pictures from financial ruin. Here, at the age of 23, she’s a joy to watch. Unlike a lot of former teen stars, she reached maturity while retaining all of her youthful charm, without ever seeming childish or forced.