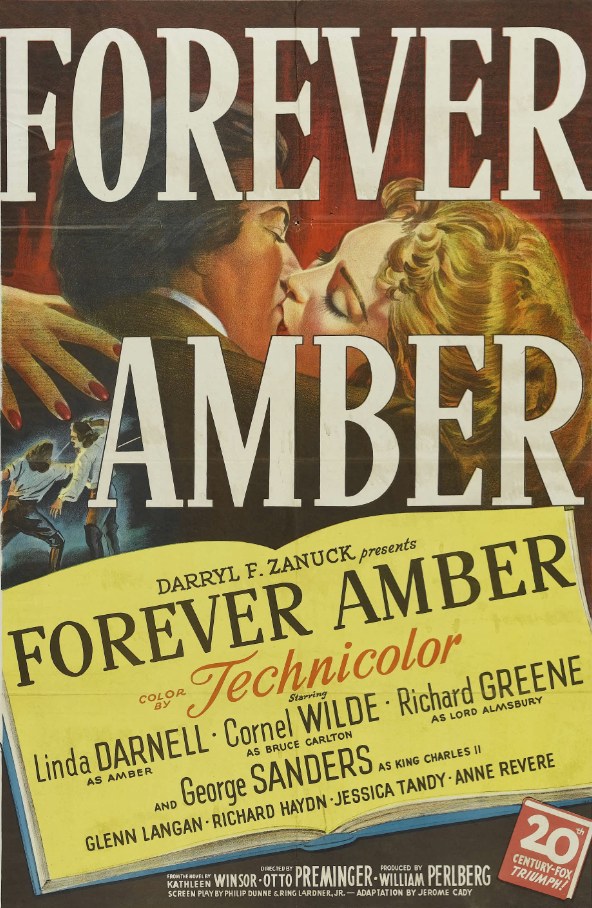 The review of Otto Preminger’s Forever Amber in the November 3, 1947, issue of Time magazine called it “every bit as good a movie as it was a novel,” but I’m not sure if they meant it as a compliment.

Kathleen Winsor’s 1944 period romance was the best-selling American novel of the ’40s. Forever Amber sold more than 100,000 copies during its first week on the shelves, and went on to sell more than three million copies. I haven’t read it, so I don’t know how much Winsor’s storytelling skills had to do with its popularity. What I do know is that it was banned in 14 states, and that the attorney general of Massachusetts — the first state to institute a ban — cited 70 references to intercourse, 39 out-of-wedlock pregnancies, and seven abortions, among other reasons for the ban.

So it seems clear that whatever other merits the novel had, its biggest selling point was S-E-X.

To be adapted as a film, a lot of the novel’s more scandalous bits had to be cut out, but it still has one big selling point: L-I-N-D-A. D-A-R-N-E-L-L.

In her journey to the screen, the vain, beautiful, promiscuous, and socially climbing Amber St. Clare lost many of her lovers and innumerable shocking details and compromising situations from the novel were excised. (The film does contain one element from the novel that was extremely rare in Hollywood films of the ’40s — Amber’s out-of-wedlock pregnancy. However, the fornicating that produces the offspring occurs so far off screen that the announcement that she’s expecting comes as a complete surprise.) No matter how tame the story might be compared with the book, though, Linda Darnell’s megawatt sex appeal and unearthly beauty lend a constant sense of illicit excitement to Forever Amber.

Unfortunately, the same can’t be said of her co-star, Cornel Wilde, who plays Lord Bruce Carlton, the gentleman soldier on whom Amber sets her sights at the beginning of the film, but who never loves her quite as much as she loves him. Wilde cuts a dashing figure, but he has roughly one facial expression. He doesn’t so much act in this film as much as he exists.

Forever Amber is set during the English Restoration, when Charles II returned to the throne from exile and the monarchy was restored. The film hits all the high points of the time period, like the plague and the Great Fire of London. Also, George Sanders, who plays King Charles II, is a lot of fun to watch. His trademark indifference and supercilious charm are perfectly suited to the hedonistic monarch he’s playing.

Forever Amber is far from a great film, but I still enjoyed it a lot. It’s a beautifully filmed Technicolor epic that overwhelms the senses with its visuals and sweeping musical score. This is the kind of film in which $100,000 was spent filming a single kiss that was later cut from the film.