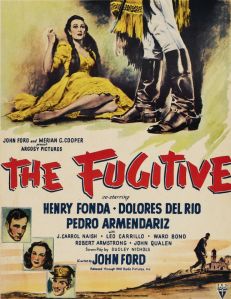 Faith and religiosity are notoriously difficult things to depict on film. It’s easy to go too far in one direction — witness for instance, the brutal, mind-numbing literalism of Mel Gibson’s The Passion of the Christ (2004). Belief and faith are abstract things, and while cinema can suggest the abstract, it is still a visual medium.

John Ford’s The Fugitive is rarely numbered among the director’s greatest achievements, but it was reportedly one of his personal favorites. It was filmed entirely in Mexico, and much of the crew was assembled from the Mexican film industry.

In it, Henry Fonda plays a fugitive priest, on the run from the authorities after the church and its emissaries have been made illegal following a civil war. He’s a man whose faith appears to be broken — or at least in the process of being tested — but it’s difficult to really know, because Fonda’s performance is so blank-eyed and tentative that it’s hard to know what’s going on in his mind for most of the picture. Ironically, The Fugitive is a movie that is strongest when it is at its most heavy-handed.

It’s clear from the outset that the movie is meant to be seen as an allegory — the opening narration tells us as much. Also, in the opening credits, we see that none of the characters have names. Fonda plays “A Fugitive,” Dolores del Rio plays “An Indian Woman,” Pedro Armendáriz plays “A Lieutenant of Police,” J. Carrol Naish plays “A Police Informer,” Leo Carrillo plays “A Chief of Police,” and Ward Bond plays “El Gringo.” It’s also not meant to take place in Mexico, but rather, as the narrator informs us, “merely a small state, a thousand miles north or south of the Panama Canal. Who knows?”

Graham Greene’s 1940 novel The Power and the Glory (also published as The Labyrinthine Ways) did actually take place in Mexico, but the filmmakers likely didn’t want to offend their host country with a story that was critical of the Mexican Revolution or any of its ramifications.

Greene wrote The Power and the Glory when he was himself a kind of fugitive. Twentieth Century-Fox and Shirley Temple’s lawyers had sued Greene and the magazine Night and Day for criminal libel over his review of the film Wee Willie Winkie (1937), which — ironically — was directed by John Ford. In his review of the film, Greene wrote of Temple that “she measures a man with agile studio eyes, with dimpled depravity. Her admirers — middle-aged men and clergymen — respond to her dubious coquetry, to the sight of her well-shaped and desirable little body, packed with enormous vitality, only because the safety curtain of story and dialogue drops between their intelligence and their desire.”

Greene’s trip to Mexico in 1938 was ostensibly at the behest of the Vatican, who wanted him to document anti-Catholic violence and persecution. According to Greene’s friend, director Alberto Cavalcanti, whose lost autobiography was recently unearthed, Greene’s real reason for going to Mexico was to escape Temple’s lawyers.

In any case, whatever narrative subtlety and moral complexity the novel had is not present in the film, which has little to offer in the way of ideas. I hesitate to call Henry Fonda “miscast,” because he’s usually such a wonderful performer, but he really is awful in The Fugitive. His facial expressions range from beatific to panicked, and that’s about it.

The power of the film — and it is a powerful film, especially toward the end — comes from its visuals. Ford and his cinematographer, Gabriel Figueroa, crafted a beautiful-looking movie, full of nighttime shadows, murky light, and sun-drenched wide open spaces. The final sequence, which is an allegory for the crucifixion and resurrection, is achieved with very little dialogue, and is well-done, if a little obvious. 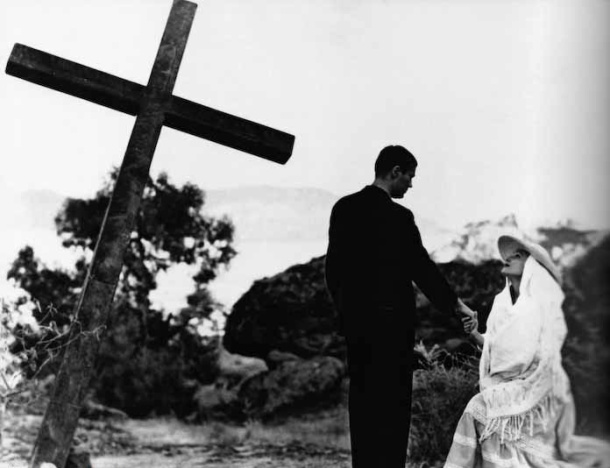